"It is not the strongest of the species that survives, nor the most intelligent that survives. It is the one that is the most adaptable to change."
--Charles Darwin 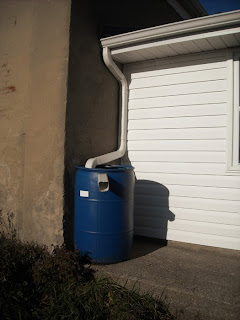 We depend on our well for our in-house water so, to help conserve this precious ground water as much as possible, we've been collecting rainwater in barrels for use outdoors. We have three of these big blue guys and three smaller Rubbermaid bins (designed for ordinary garbage use) paired up with them, plus one rogue bin near the barn (rough estimate: about a thousand litres, combined).
That's a lot of water, but we had three vegetable gardens, nearly 30 baby trees, and many flower gardens that needed regular drinks, so when the summer got dry (with weeks between rainfalls), we had to prioritize: gardens first, flowers and trees second. At one desperate and troubling point we were drawing water from our well (via the bathtub) to water the veggies.

But we survived the brief droughts --as did the vegetables, trees, and flowers. However, a nasty byproduct of so much standing water is the proliferation of mosquitoes. They love it and they laid their eggs in our barrels every chance they got, producing grotesque squirming larvae which grew up into blood-sucking whiners. What to do?

Rather than resort to a potentially unhealthy chemical solution, I remembered what my good friend, Mike Teng, suggested: feeder fish. These little guys are cheap (a couple of bucks for a dozen fish) and are usually used either as food for bigger animals or as starter pets for kids. So I went to the pet shop and brought home a dozen and put in two fish per barrel.

The fish were happy and I was happy: for a couple of bucks I solved (part of) our mosquito problem with fish that were earning their keep by eating all the mosquito larvae while living luxuriously in giant barrels.

Then they started dying.

Every couple of days there was another dead fish. Was the rain water too acidic? Were birds pooping in the barrels? We still don't know. By the time we got down to three or four, I went to the pet shop again and got another dozen. I bought fish food to supplement their diet in case the mosquitoes took a break from propagating (fat chance!). 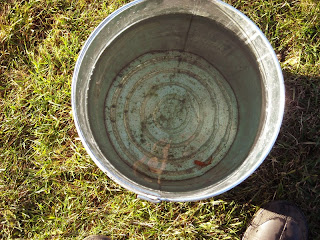 We kept referring to him (her?) as Survivor Fish. Since there was overlap between fish batches from the shops, I'm not certain if he's from the first group or the second, but I am certain he outlasted them all.


As October progressed, frost came more frequently in the mornings. Then ice. How could Survivor Fish survive the top 3-4cm of water in the rain barrel freezing solid? Well, cold water contains more oxygen and algae has been growing in the barrel for some time, so the conditions were still good for our little hero.
But the days are getting colder and I wanted to reward him with more than a dis-honourable and icy burial at the bottom of a rain barrel.
I decided to take him indoors.
I knew I would have to re-introduce him to warmer temperatures gradually, so my first step was to take him out of the big blue barrel (the one by our garage) and keep him in a metal bucket in the garage where it wouldn't freeze. He survived the night, so I took him outside and let him bask in the sunshine until just before sunset: 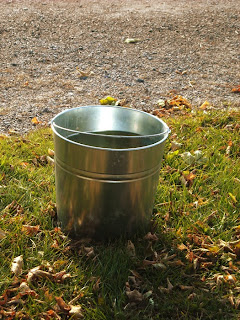 Then I took him inside to the Gallery where it's still pretty chilly: 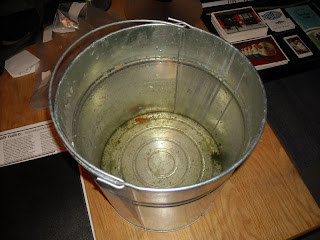 He seems to be quite happy with the transition (note the algae from the barrel in the bucket) and has now been indoors for two days. I have no idea what the odds are of him surviving the winter, but he's beaten some hefty odds already, so I wouldn't put it past him.
This little guy is definitely a Big Fish in my books: 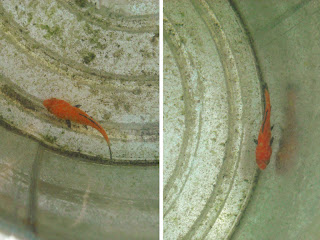 UPDATE (13 Nov.): Survivor Fish didn't last a week indoors. Four days after I brought him inside I found him floating in his bucket; he couldn't adapt, after all. So long, little buddy.
Posted by Milé Murtanovski at 7:37 PM 1 comment: