I just returned from my second trip to Labrador with ArtsCan Circle.  ArtsCan Circle sends teams of volunteer musicians and artists to remote Canadian Indigenous communities to make art and music with First Nations kids (you can read about my first trip here)...  And I feel like I left a piece of myself behind.

My travel mates were David Anderson and Mike Stevens.  David is the Artistic Director of Clay & Paper Theatre, where I worked for 4 years before starting Small Pond Arts with Milé. The stories David told me over the years about his trips with ArtsCan were the reason that I wanted to get involved.  Mike is a musician and the founder of ArtsCan; he’s such an interesting guy that a documentary about him, A Walk in my Dream, is premiering December 2, 2011 in Toronto.


In the days before the trip, I was sewing like crazy, turning the fabric from this year’s silo banner into dozens of hand puppets. 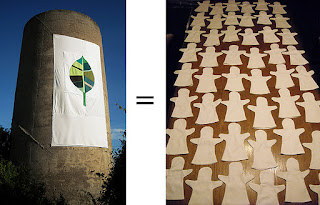 While sewing I listened to Thomas King’s CBC Massey Lectures, The Truth About Stories, A Native Narrative.  It is some of the most compelling writing I've ever experienced: hilarious, political, personal, and profoundly moving.  It touches on the plethora of issues faced by First Nations people: racism, poverty, a cruel and deeply unfair history… and was a perfect reminder of why I was volunteering to spend the week in Sheshatshiu.

King writes, "We maintain and tolerate poverty not because we believe adversity makes you strong, but because we're unwilling to share."  I’m no saint, but I do know how to share.  So off I went. 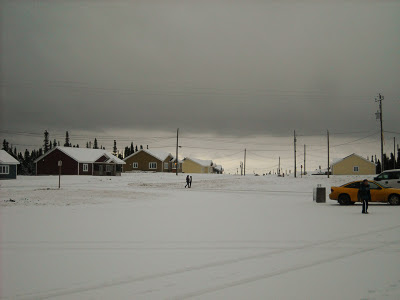 We pulled into the school parking lot on Monday morning and there was a certain comfort in returning to this place.  I knew where I was.  I knew why I was there.  Teachers remembered me, kids remembered me.  I quickly fell into the routine.  The kids loved the hand puppets I’d brought, making them into fairy tale and comic book characters, affixing buttons, fabric and the assorted bits that I'd brought along with me. 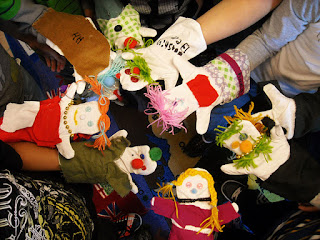 Arrangements were made for an elder, Carolyn Andrews, to come in and tell a traditional story, in both English and Innu-aimun; David and I would work with a Grade 6 class to turn the story into a shadow puppetry play.   The grade 9 students who were her audience fell dead silent while the old woman spoke.  This class had been making music with the looping equipment that Mike had brought with him, and they would be creating the score for our shadow play.

We brought along with us a couple of Flip video cameras.  I'm not really one to endorse products, but these cameras are so simple and sturdy that I had no qualms about handing them to even the youngest kids and saying "Go make a video.".   The cameras have a USB key that pops out so you can plug it right into your computer and watch videos back instantly.

The sixth graders had been out swimming when the elder had come in, so we showed them the video I'd taken of her telling the story, Kautitikumat: The Caribou Hunters. 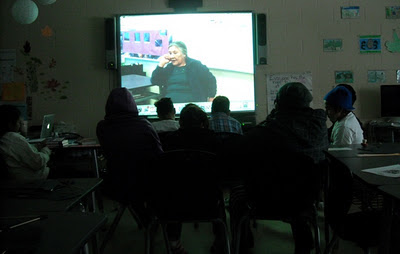 We made a list on the board of the images from the story, both characters and things, and we let the kids choose what they wanted to make.  I love doing puppetry with kids because it is so playful.  It exercises the imagination and kids of all skill levels can succeed.  And by succeed I mean have fun.


The art teacher at Sheshatshiu Innu School, John Foster, is a great guy.  I spent a few lunch hours at his place in nearby Northwest River.  His house on the shores of Lake Melville is a beauty of a spot. 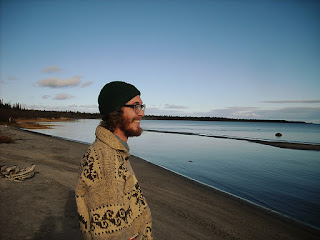 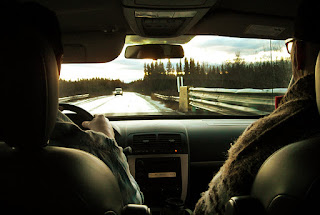 Driving driving driving.  Well, Mike was driving.  I was the backseat passenger, an hour and a half each day.  Backseats are confining.  You can see, but not see really well.  Kind of like spending a week in someone else's community – you can only see so much, and most of the reality is hidden from view.

The trees whizz past me. 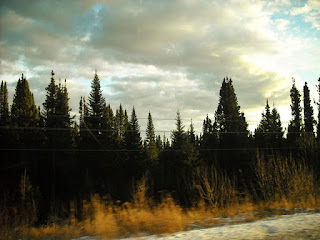 The week is so busy that it’s hard to even process it as it’s happening. 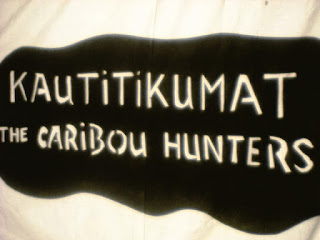 We performed the shadow play on Friday four times, presenting it to every other class in the school. I was really impressed by the kids' level of focus when rehearsing and performing the show, I know the repetition of rehearsals and shows can get boring.  But these kids were totally on, totally present. I loved seeing them work together, helping each other to remember their cues. 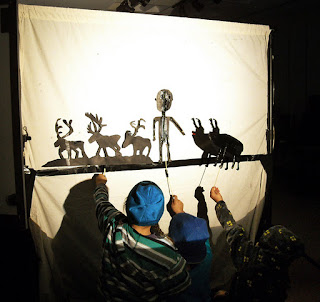 And before I knew it, it was all over.  The final bell of the week rang, students and teachers dispersed.  As we were getting ready to leave the school a girl from the third grade came up to me with the puppet she’d made earlier that day.  We talked about puppets; she wanted to know what other types of puppets there were in the world, and when I would be coming back so we could make more. She hugged me a few times and we said goodbye; then as I was getting in the car she appeared again, waving and yelling across the parking lot, “Goodbye, Miss!”.  I waved back.  A ticker tape parade and twelve marching bands couldn't have given me a more magnificent send-off. 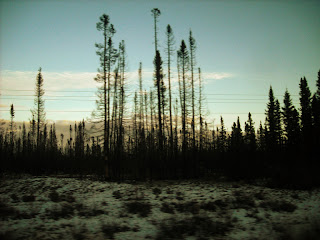 
I can't wait to go back!
Posted by Krista Dalby at 9:11 PM No comments: Links to this post

A few weeks ago, I made a presentation about Small Pond Arts at Kingston Arts Council's Pecha Kucha. Pecha Kucha Night originated in Tokyo, Japan, as an event for young designers to meet, network, and show their work in public. Drawing its name from the Japanese term for the sound of "chit chat", it rests on a presentation format that is based on a simple idea: 20 images X 20 seconds. Artists show 20 of their images, for 20 seconds each. It's a format that makes presentations concise, and keeps things moving at a rapid pace.

It was an evening of presentations devoted to theatre, and I felt a little like the odd one out as the other 6 presenters hailed from more traditional theatre backgrounds; but everyone was very friendly and responsive to my presentation. It was a lot of fun and the fast pace really kept things snappy. A tip of my hat to all the artists featured in my presentation, including those I (doh!) didn't name: Trevor who puppeteered Punch, and musicians néGar, Kori, Shawn, Graydon and Lara.

You can watch my presentation below.

BONUS DRINKING GAME: Take a drink every time I say "Um." You will be loaded by the halfway mark.

Posted by Krista Dalby at 6:58 PM No comments: Links to this post