"Which painting in the National Gallery would I save if there was a fire? The one nearest the door of course."
– George Bernard Shaw

Last February we installed a wood stove in our dining room to supplement our winter heating with wood rather than burn tons of oil in the furnace. Sure, we're releasing the wood's carbon dioxide at a faster rate than if it were to decompose naturally over a long period, but we feel it's still cleaner –and it's certainly less expensive– than oil heating. 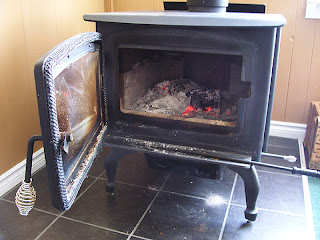 To prepare for the 2012/2013 winter we ordered two cords of hardwood (I wanted three cords, but the place we called would only give us two for some reason). So they brought and dumped a huge pile of wood which I slowly and neatly stacked behind our red shed and covered with a tarp, ready for the inevitable chill to come.

I brought the first batch of wood to the front porch via wheelbarrow (Vincent, to be specific) which I pushed onto the porch with the help of a ramp made from the door we removed from the Shit Shed before its renovation. I even planned ahead for hauling the wood in the snow: I bought a sled, attached ropes to it, and pulled the wood to the house like a stack of heavy children, all while singing along unselfconsciously to David Bowie songs. 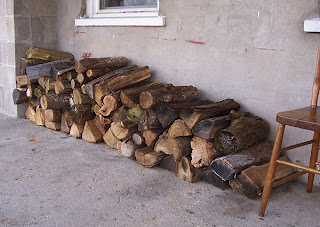 But the winter wore on and, despite a few warm patches, was quite cold. And we were running out of wood. 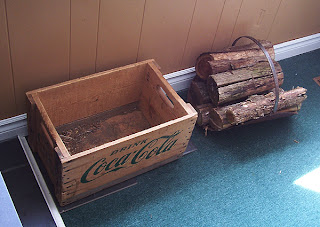 Plot twist: we decided to burn the last of our oil at the end of the previous winter, hoping (in the summer or fall) to replace that furnace with one that ran on propane...but that didn't happen. So we had no oil in the tank and, to further thicken the plot, the furnace didn't pass a recent obligatory insurance inspection so we couldn't order more oil anyway. All we were left with was the wood stove, baseboard heaters in our bedroom, and a few portable space heaters. And hot water bottles. We love our hot water bottles: 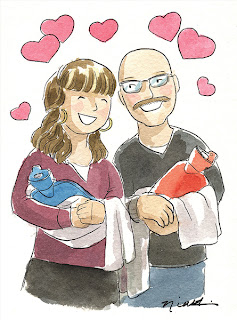 Rather than reordering some more wood right away, I thought I'd first try something I believed to be mere myth –an old wives' tale used to scare little children so they don't become artists– and surely debunked by now. As the legend goes, finished watercolour paintings burn faster, hotter, and longer than chopped wood. That's gotta be bullshit, right? Well, I tried it out... 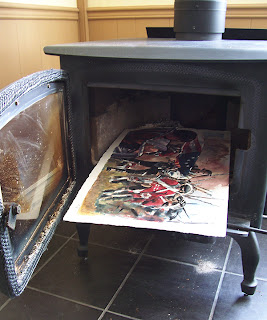 Taking an old watercolour painting I did way back in 2002 (Revolution) that was just sitting around taking up valuable gallery space, I unceremoniously shoved it into our wood stove, expecting to debunk the myth, but, at the same time, hoping it was true and that this crazy endeavour would provide us with some much needed heat. 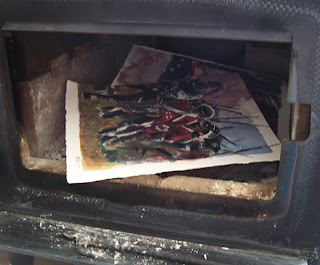 Well, it was too big, for starters, so I had to tear it in half, separating the kid reading from a history book from the Revolutionary War soldiers engaged in selfsame historic battle and, lo and behold:

I had barely closed the door when the painting burst into flames, spurred on simply by the nearly dead embers. With the air intake fully open we were able to heat the house from the dining room all the way to the gallery (which is usually pretty chilly in winter because of the cement floor). 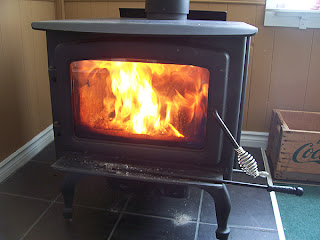 The burning painting was still blazing six hours later, about half as long as it took me to paint it.

With the myth confirmed (i.e. a finished watercolour painting will, indeed, burn faster, hotter, and longer than wood) we no longer had to worry about our rapidly diminishing wood pile...and we're keeping cozy while simultaneously making room for my new paintings by getting rid of old stock in the gallery.

What Your Heart and Art Desire

We may be up to our knees in snow, but it's time to start dreaming of the warmer months and filling our farmhouse and studio with the creativity of artists-in-residence. 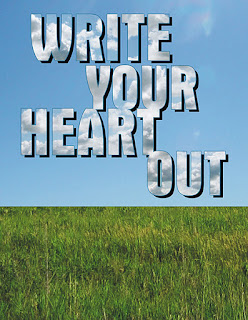 Until March 31, 2013, we're offering 20% off all artist residencies of 1 week or more. You can write, paint, sculpt, draw, sing, wander, dream, or whatever it is your heart desires. 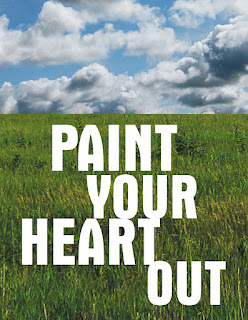 Is it time for you to start plotting your creative escape? For information on how to apply, visit our website.
Posted by Krista Dalby at 10:13 AM No comments: