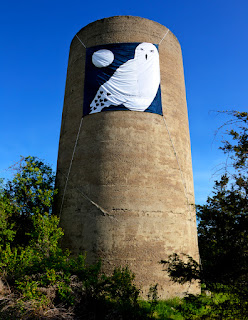 Krista and I like birds, and over the past eight years we've identified over two dozen species that visit and/or hang around at Small Pond (we have a few bird books and a decent pair of binoculars). Sadly, owls aren't among that group. So why an owl, then? There are a number of different owl species that visit and/or hang around Prince Edward County, and the Prince Edward Point Bird Observatory does a regular banding of them, so, somehow we got inspired by that (and our great admiration for owls, of course) and we decided to "put a bird on it" one more time (we previously put a pileated woodpecker on the Silo, thanks to Leanne Shea Rhem). 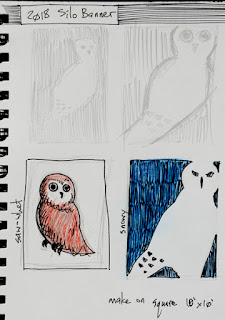 The design was originally going to be a close-up of a saw-whet owl's face done in a very stylized, but still recognizable, way. After playing around with a few designs I came upon a different, more minimal, composition featuring the shape of the bird and a contrasting background colour. The face of a saw-whet owl is almost unbearably cute and it would have been nice to see one at that scale, but we decided a snowy owl would better suit the new, simpler design. 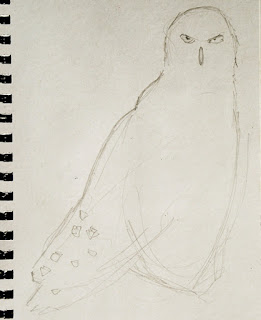 I wanted the bird at rest (so as not to be mistaken for this album cover) and I wanted it looking at us, rather than in profile. I settled on an almost-full-frontal-but-kind-of-three-quarters view, tweaking the shape a bit to be more curvy, but still properly owl-like. 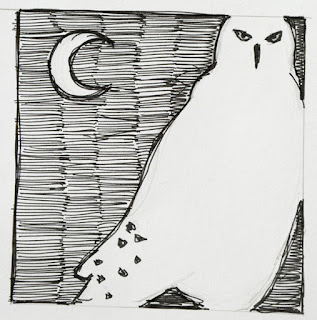 Clearly, the top left quadrant of the design was sorely empty and adding the moon was the logical remedy. That crescent moon went through a phase change to full and now is a bolder design element. Also, full moons on clear nights around here are so bright that you can set up your favourite comfy chair outside and read by the light of the moon, so it's nice to sorta pay tribute to that, as well.

The spots on the owl's wing tips transformed into little hearts (they already kind of looked like hearts, and our first banner featured a big, red heart, so that was a playful little design choice). And there's nine of 'em to mark this, Small Pond's ninth, season. 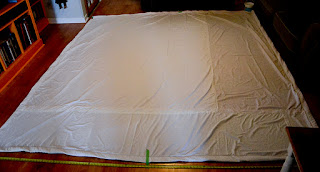 Krista once again sewed the sheets together and made channels on two sides for the ropes to go through. Last year's banner lasted well up until the last wind and ice storm (mid-April, 2018!), and that was our longest-lasting banner yet (true to its message, it didn't give up –it was killed!). Krista's made some sturdy banners before, but something tells me she's getting better at it every year. 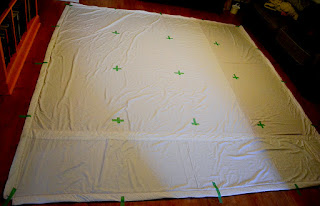 I was then charged with the daunting task of drawing the final, refined design on the very large banner surface. We measured out a loose grid (marked at the intersections with masking tape) and I did my best to get the proportions right. I would have done better if we marked off more grid points. 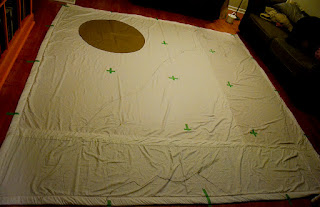 My pencil lines appear faint, here, but they (and the paper moon template) were enough for Krista to then use as a masking guide to protect the owl from the spray painted background. Rather than sewing coloured fabrics for the designs, Krista has been masking off and then spray painting the banners since the Triskelion in 2016. The rattle can colours hold up exceptionally well in the sunlight, the rain, and even the ice and snow. 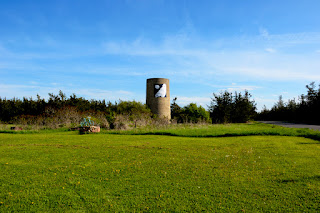 We raised the banner, kicking off another season of Small Pond Arts shenanigans, in our traditional Silobration style, with friends, food, kids running around, and a hearty game of Kubb. 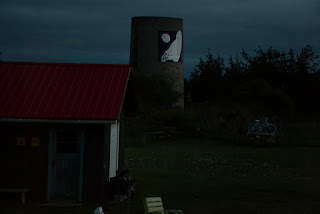 Just after sunset, while the human eye can still see in the dim light, the banner looks like it's illuminated from within. This isn't a very good photo of that effect, but the stark white of the owl and the moon, contrasted against the dark blue banner background and darkening environment is quite a striking sight. Come by and check it out!

Twilight (with Moon and Venus).

One week after its raising, our snowy owl is already courting the full moon. 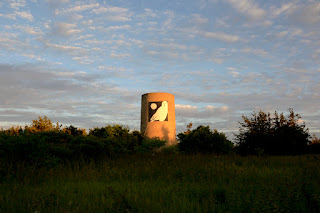 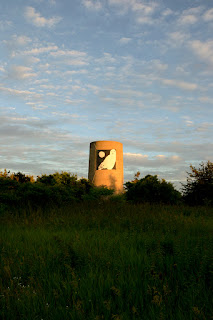