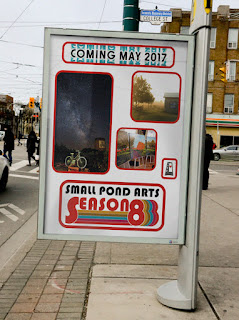 Because of its complexity and a severe lack of time (mostly focusing on two very large portraits), I didn't get around to executing my idea for an April Fools' gag this year, but I have fun with them (my favourites being the Vaporators and Video Games gags), so I'll make sure I do one next year, even if it's a different idea.

That said, I did create some "street ads" for our upcoming Season 8 starting in May that are sort of in an April Fools' vein because they're not real but meant to appear so (just like our Season 6 promotion gag). And no, I have no idea how much it would have cost to actually buy these ads.

I started by designing a poster in CorelDraw using photos of various Small Pond scenes (the silo, bike, and the Milky Way, our first barn quilt, and a large triptych I painted last year), but the key element was the 1970s-inspired Season 8 logo to stand out front and centre. The '70s angle was to tie in the "celebrity endorsements" I had in mind (see below) –plus, I like that aesthetic. 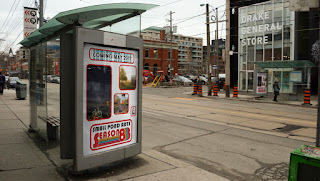 Next, I took a number of photos of bus shelters and streetcars while on a short visit to Toronto with PhotoShoppery in mind (angles and lighting were key concerns). As usual, I shot way more than I needed so I could pick the best ones for the project. 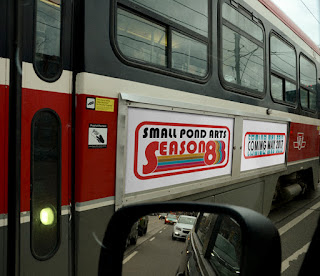 Stopped at a red light, camera ready, I got this nice shot of a TTC streetcar showcasing the ad panels.
This narrow, horizontal layout made including the photos difficult, and since the logo and the date covered the "what," "when," and "where," I eliminated the pictures to be as concise as possible. 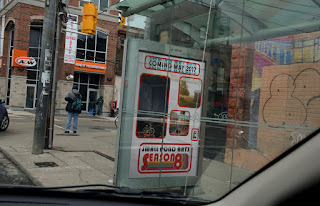 This was shot near our old neighbourhood at the intersection of College and Ossington (I was heading northbound). I liked the angle and street elements, but knew that the foreground glass was going to make this one a real challenge –a challenge that would end up making this one look the most realistic if my digital surgery skills were up to the task. 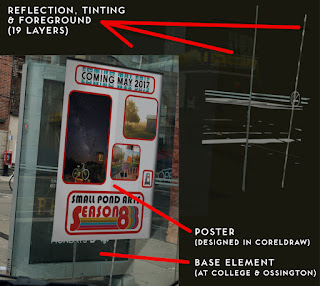 As you can sort of see, a lot of work went into recreating all the elements that would be in front of the poster were it really inside that bus shelter. It's never just a matter of cut-and-paste! I wasn't too worried about obscuring the poster too much (it would be seen clearly in the first photo up top) –in fact, the poster itself is a bit of a MacGuffin since the logo was the most important feature as far as legibility was concerned. 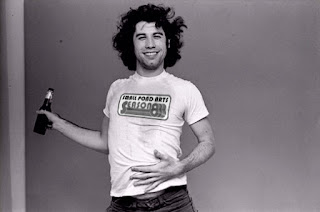 Of course, what's a fun PhotoShop project without bizarre anachronisms? Celebrity endorsements are one thing, but time travel is way beyond our capability for now. In any case, John and Debbie seem to be enjoying the only Small Pond shirts we've ever "made." 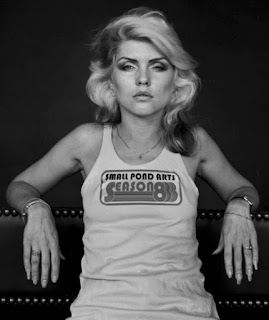