When I worked at Clay & Paper Theatre, we built giant puppets all the time.

I assumed that when we moved to Small Pond that we’d continue doing the same. But such hasn’t really been the case – there are always too many other projects and not enough hours in the day. All this to explain why it took more than a year to complete our latest giant puppet, Sugar Shack Jack.

The idea for this puppet arose when we were asked to participate in an event in Wellington as part of the 2011 Maple in the County, our region’s annual celebration of the sweet syrup.

Milé and I sculpted the head out of cardboard which we stapled together with a creech; a “creech” is so-called because it looks like a creature. For some reason most of the world calls this tool by the very boring name of "staple pliers." Rounded bits like the nose, eyebrows and bottom lip were made out of old couch stuffing and masking tape. 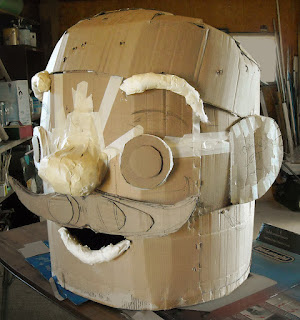 The giant cardboard head barely fit through the doors of the Wellington Arena, but thankfully we squeezed him in and I spent the day getting kids to help me papier-maché this big guy. It was great fun.

...And then poor Jack spent the next year languishing in our garage… 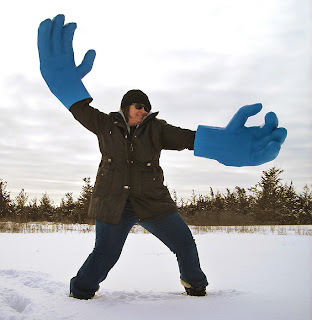 At some other point in time, I built this giant pair of hands, originally to go with a different puppet. Using a box cutter I carved the fingers out of an old pool noodle and masking taped the pieces together, then taped on some cardboard to serve as the hand. 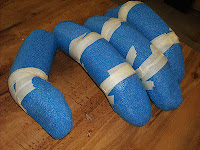 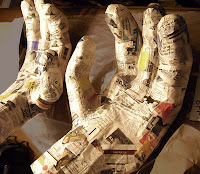 I papier-machéd the hands and I'm really freaking happy with how they turned out. These hands are spectacularly strong and lightweight. I screwed a wooden crossbar inside each of them which act like handles, and tied a long strip of fabric between them so I can wear the hands like mittens on a string; this is a very handy feature, if you'll pardon the pun, as I can let my puppet hands dangle if I need to use my real hands to have a drink, itch my nose, and so forth.

Spring 2012 rolled around and Jack was on my mind.  I thought I should really get him finished – so I booked us a gig with him.  Nothing like a deadline to put things in motion. I finished up the papier-maché and adjusted the contraption to make this puppet wearable. It was a bit of a brain-buster, but we eventually figured it out.

We bolted a couple of 1” x 1” pieces of wood to an old aluminum backpack frame. At the end of these two pieces of wood we screwed a flat piece of plywood – and between the lumber and the plywood we put this piece of old foam. The puppets sits like an upside-down cup on top of this wood/foam sandwich on sticks. It’s kind of weird but it totally works – this is a surprisingly light and comfortable puppet (as far as giant puppets go, that is). 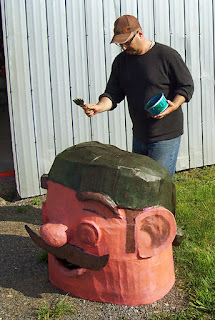 Milé gave Jack a nice a paint job, and I worked out a costume that would fit right over the backpack. I affixed a piece of thin black fabric over the hole in the mouth; this is where the puppeteer looks out, and the visibility is not too bad. 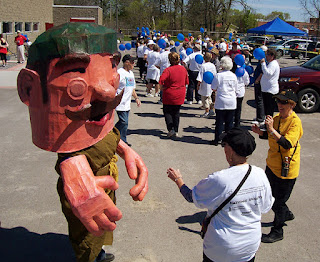 Jack had his debut at Hike for Hospice in Picton this past weekend, which raised funds for Hospice Prince Edward. A good time was had by all in support of this great cause.
Posted by Krista Dalby at 2:06 PM No comments: