How I Got Into Puppetry

"How does a puppet come into being?  It happens when someone sees an image of himself, or some aspect of the world, in the crooked glass of his imagination and gives it form, movement, and sound. Someone has the urge to bring his drawing to life and make it move and talk.  Or maybe he thinks of a sound first and gives it shape and movement.  Or it may be an intangible, like the force of the wind, that inspires him and he gives it a shape and character.  The primitive urge still applies." - Bil Baird, The Art of the Puppet

Bil Baird's attempt to explain how a puppet comes into being could just as easily be a response to how a puppeteer comes into being. "How did you get into puppetry?" is a question I'm often asked. I usually give a short answer, one that is not very truthful but is efficient for cocktail parties or classroom conversations. I say that I tried out regular theatre and found it boring. It's not much of an answer. What follows is the rather long but far more accurate response.

Like  many other North American kids in the 1970s, I grew up with the Muppets, who were as famous at that time as any other celebrity.  When I watched Sesame Street or The Muppet Show I completely bought in to the fantasy,  rarely considering that the characters were puppets, objects being manipulated by humans. These oddballs clearly had an influence on me, as I named my first pets after them; a trio of goldfish I called Ernie, Bert and Big Bird (epic misnomer). 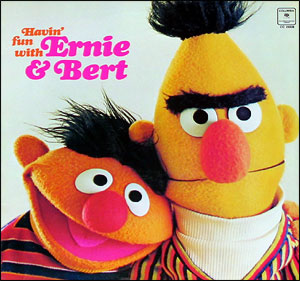 I grew up in Calgary, and in high school our drama class took a field trip to Lunchbox Theatre, where we saw marionettist Ronnie Burkett perform one of his first shows, Virtue Falls; I've seen many of his other shows in the 20 years since.  I loved drama class, but hated high school, so I dropped out.

A few years later, I found myself in the theatre program at Mount Royal College, where I took classes in costume- and set-making, stage management, and a variety of others on the technical side of things.  For an assignment in our props class, my class partner and I built an evil wasp marionette; it was pretty well-made, from what I can recall.  I graduated from college and decided that I never wanted to do theatre again, and proceeded to spend a whole bunch of years working dead-end jobs, traveling, and partying.  I wasn't doing a whole lot creatively, but I was writing.


Eventually I went to Concordia University in Montreal and got a degree in Creative Writing.  I wanted to be a novelist.  No, a short story writer.  No, for real this time, a screenwriter.  Or maybe a tv writer? Who was I kidding?  Resistance was futile.  The theatre dragged me back and I started writing plays.  Most of them were pretty terrible, but then they started getting better.

After university I moved to Toronto, where I got a Real Job and paid off my student loans. One day I heard that artist Lisa Pijuan-Nomura was holding a puppetry workshop. I had no idea what to expect but soon discovered her beautiful vision: a flock of puppeteers would create small portable puppet shows in cardboard box theaters. During one of the famously fun Red Cabarets, we would simultaneously descend on individual tables and perform short puppet shows. I had never heard of anything like it but I'm adventurous and I was eager to give it a try. My show was about two formerly conjoined twins; one was about to depart for space camp and the other was having severe separation anxiety. The performances began and the cacophony was unbelievable, the delighted surprise of the audience and the energy of the puppeteers were a potent mix. I'd never considered myself much of a performer, but when I performed my puppet show, I was delighted to discover that it wasn't about me at all. My audience was watching these two freaky little dolls being moved around in a cardboard box. And they were riveted.

That was the night I fell in love with puppetry.


Some time before this I had fallen in love with a man.   Two years later, Milé and I moved in together.   He was living in a tiny third floor apartment (which we called The Shoebox) in Toronto's West end, and the day I moved in with him I met his downstairs neighbor, David Anderson.  I knew that David was a theatre person, so I suggested that we have dinner and get to know each other.  Our dinner date rolled around, and when Milé and I showed up, David was totally distraught; his producer had just quit, and he had a show opening in just a few weeks.  As it so happened, I had just left my Real Job and had no immediate prospects, perhaps I could help him out for a few weeks?  I was hired over dinner that night, and wound up working with David at Clay & Paper Theatre for the next four years.


Clay & Paper creates outdoor theatre, parades and festivals using a myriad of puppetry styles, from giant puppets to hand puppets, and everything in between.  David and I wrote four plays together (soon to be five!), and I produced all of the company's shows and events from 2006 to 2010.  This was where my true education in puppetry took place.  David had been creating public space performances since the sixties, and there was no idea that was too crazy.  Turn a wheelbarrow into a puppet herd of race horses?  No problem.  Form a bicycling-oriented puppet squad?  Sounds perfectly reasonable.  Burn twenty-foot skeleton sculptures in the park?  Terrific!  I wrote, I produced, I built, I performed, I led workshops, and over the years organized hundreds of people.


Thus it was that puppetry conspired to take hold of me.  Meanwhile I had met young performer and producer Guy Doucette, who invited me to attend one of his shadow puppetry plays.  I was instantly fascinated by the art form. Guy and I became fast friends and soon we were collaborating on shadow plays.  I also met teacher Craig Morrison through Clay & Paper; he's a kick-ass designer, and soon he started collaborating with us, too. Over the last four years we've created half a dozen shadow puppetry plays, which have become increasingly complex and refined.


When I made a brief foray into the world of opera with Tapestry New Opera Works, of course my puppet-brain came with me, and I wrote two operas for puppets: The Shaman's Tale (composer Kevin Morse) with giant puppets and shadow puppets, and sock puppet opera The Perfect Match (composer Anthony Young) which was eventually made into a Bravo! short film.

I can't seem to quell this madness for puppets, and now spend a good deal of time doing puppetry workshops through ArtsCan Circle, the Ontario Arts Coucil's Artists in Education program, and at Small Pond Arts.

So there's the long answer to how I got into puppetry.  Or perhaps, how puppets got into me?

Click on the logo above to read a bit about what went into its creation.