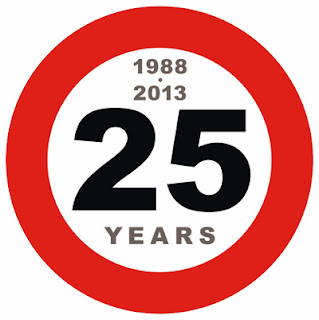 Since painting means so much to me, I wanted to make a big deal concerning my 25 years of painting (from the awkward but enthusiastic baby steps in the first few years to the full-blown intensity of recent years), and, inspired by Queen Elizabeth's Silver Jubilee in 1977, I've been using that name to commemorate this, my own Silver Jubilee.

My celebrations took on various forms, but I started with a bit of history/reminiscing over on my own painting blog:

In Part One I recount the very first steps of my introduction to watercolour painting and the artists that inspired me to explore this strange but beatiful medium.

In Part Two I talk about my growing interest in portraiture and I shared a couple of my novice paintings as well as some of my more current portraits to show that I've made some progress over the years.

Part Three is about the year I decided to get more serious about getting a better understanding of watercolours by painting one picture per week (spoiler alert: I ended up painting 63 that year).

In Part Four I tell the story of my accidental initiation into painting in oils and the medium's lasting hold on me.

Taking place on Facebook and also mentioned in Part Five on my blog, I gave away five watercolour paintings at random –because you're supposed to give gifts for an anniversary, aren't you?

Scheduled to take place during this Jubilee, I did another painting marathon in November which, after last year's marathon, I didn't think I'd do something like that again, but after my 33 on 33 project this spring, I felt I still needed to learn more about Prince Edward County, so County 101 was conceived.

Five years ago I did a big watercolour to celebrate my 20th Anniversary, so, because I love painting so much, I wanted to paint one large picture (featuring the same model) to mark the occasion, which, at the time of this posting, is about 75% done (detail below). Working in oils this time, this one has an element from my very first watercolour back in 1988 but does not, unfortunately, have any of my matrix patterning anywhere... 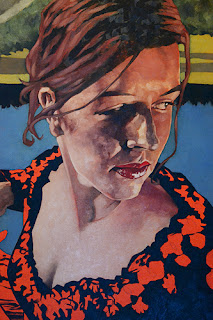 When that's finished later this week, I'll attend to the four new paintings of my Tourament of Shadows series which are prepped and ready for painting.

Will I take a break after that?

No –in fact, I plan on kicking it into a higher gear –there's a lot of painting still to be done!