How to Build a Giant Lantern

For our third annual Firelight Lantern Festival I wanted to build something really special for the parade. When I saw pictures of giant lanterns from the Minneapolis Lantern Festival, I was totally inspired. I contacted my friend, fellow puppet artist Mary Plaster, as she'd assisted in making the lanterns, and she gave me some great tips.

With artist friends Susanne Larner and Nell Casson on board for this project, we decided to make two giant lanterns, a rabbit and a turtle, to go with this year's theme of 'earth.' Both animals are local to our area and are resplendent with symbolism, from fables to literature to First Nations' mythology. I had seen the sketches the MPLS Festival artists had made; they were very elaborate. I guess we're into a more organic approach.

We acquired the requisite materials: 6-foot lengths of bamboo, lots of plain white sheets, masking tape and hot glue. To begin, we had to split the bamboo, which was its own learning curve. Pro-tip: wear gloves! Split bamboo is very sharp and splintery, our hands got terribly cut up the first day. I found the easiest way to split the bamboo was to use a pair of garden shears to split the end and slide the shears down the split. Generally splitting them into quarters seemed to work quite well. The bamboo becomes very flexible yet is still very strong.
We started out building the frame of the rabbit's body, a big oval shape, and made cross-bars from unsplit bamboo for structural support. We attached the bamboo together with joints of masking tape. Once we'd made the body, we could divide up the different tasks: someone made the hind legs, someone else the head, tail, and front legs. We attached it all together, but left the head separate. When the structure was finished we sprayed the joints with Rockerguard - an automotive product that is basically a rubberized glue that ensured that if the masking tape dried out all the joints wouldn't spring apart.

Next we had to install the lights. This was a bit nerve-wracking as once the fabric was applied to the outside, it would be difficult to change them. We did a few tests using a three different types of LED lights: strings, hanging bulbs, and push-lights. We needed somewhere for the battery packs to go, so we hot glued some tube socks to the inner part of the frame, and fit a few battery packs in each one.
We wanted to be able to carry the lanterns atop of large poles, but have the ability to take the poles out for transportation and storage, so we added cardboard tubes and sealed up the tops, so the poles could easily slide in yet be quite stable.
Satisfied with our structure, we started applying the covering. We worked section by section pulling the sheets tightly over the structure and hot gluing the fabric to the bamboo. 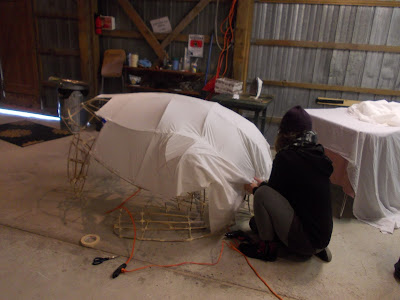 As we needed access to the battery packs to light up our lanterns, we decided where the best access points would be, and created flaps held in place with velcro.
I'm glad we started this project early, because it took quite a long time. Final touches included adding black felt for eyes; being a puppeteer I know that eyes really bring characters to life. We left the head off until after it was lit up, and attached it with zip ties, then tied a flowy ruff around the neck to hide the seam. 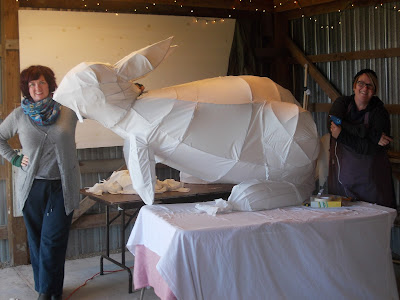 We were all really happy with how our giant lanterns turned out, and they looked so magical floating down Main Street Picton in our parade.
The lanterns were very lightweight and easy to carry. We provided our "lanterneers" with cumberbunds, small pouches worn around their waists, giving them a place to rest the ends of their poles.
Big thanks to everyone who helped make and carry our giant lanterns. What should we make next year?

Posted by Krista Dalby at 11:17 AM No comments:

It’s one of the most infamous stories of Prince Edward County; that of a murder and bungled criminal investigation, followed by a swift trial and botched hanging of two men. The crime took place in 1883 just outside the village of Bloomfield, about a 15 minute drive from Small Pond; the trial and hanging took place just down the road from us at the Picton courthouse and jail. No one had ever written a play about this troubling incident of local history, and never one to shy away from the macabre, I decided that I should. It's a fascinating story well worth retelling.

The superb book by Robert J. Sharpe, The Lazier Murder, was a great start to my research. I consulted many other sources, and discovered some of the historical accounts were contradictory, even as told by people who claimed to have first-hand information. I always take historical sources with a grain of salt, and I certainly claim my fair share of artistic license while writing.

It was a challenging play to write. I had to make sense of 1800’s judicial processes and try to make them interesting for an audience. I decided early on that there would be two narrators: Margaret Jones, the only living eyewitness to the crime, and William, a local shoemaker, a character of my invention.

Margaret was a Quaker, and William was a working class man. I had to create distinct voices for the two of them with period-appropriate language. I’d also decided from the beginning that it would be a shadow puppetry play, as I thought this would be a great device to skip around in time and location, as well as a good way to deal with some rather grisly subject matter. Plus I would get to work with some of my favourite collaborators; I’ve been making shadow shows with Guy Doucette and Craig Morrison since 2008; we call ourselves Shadow of a Doubt Collective.

Writing the first draft of anything is the hardest. Somehow, I slogged through it, and in the summer of 2014 we had a public reading. Lots of people came. Even more astonishing, they liked it! After the reading I did a few revisions, and then I met with Craig, designer extraordinaire, to plan how we should proceed. We decided to make a video trailer for the play to help get some funding to produce the show. When, eventually, we staged the play, I edited the ending so we could use the same video for promotional purposes. Here it is:

I’ve worked on and off with Festival Players of Prince Edward County over the last 6 years, and they agreed to come on as a co-producer, which was huge for our little puppetry company. We applied for funding and got it. This puppet show was going full-steam ahead!

Craig and I went through the script and broke it down scene by scene, deciding on what shadow puppet imagery we would use to tell the story. The puppets were built by Craig and Guy at Small Pond Arts. The puppet factory, a.k.a. The Shadowlands, is always an intensely productive time, with hour after hour hunched over cutting mats as characters and backgrounds spring to life from black bristol board.

Once the puppets were made, everything was taken away to be laminated. Back from the print shop, puppets were assembled and gels and sticks added. Let the rehearsals begin!

In addition to being a great puppeteer, Guy is also a terrific actor, and I’d cast him in the role of William.


New-to-Picton actor Joan McBride joined us in the role of Margaret; she gave a tremendous performance.

We rehearsed at Small Pond for a little more than a week before loading into our venue, the beautiful Macaulay Church Museum in Picton. Our puppeteers and stage manager were the Festival Players’ Young Company, and Toronto puppeteer Andrew Young mentored the new puppeteers and ran the show backstage. Check out this time-lapse video of them in action:

The show ran for ten nights and was whole-heartedly embraced by the community, with full houses and standing ovations. This enthusiasm from the audience was the true pay-off for two years of work invested in creating the play.


Following each performance, Joan, Guy and myself led the audience on a tour of the jail and gallows, just a block away from our venue. It was really rewarding to have this opportunity to engage in a dialogue with the audience each evening, and a creepy and powerful experience for them.
I am so proud of this production and I hope to stage it again some time in the future. A heartfelt thanks to all the talented artists for their contributions, to Festival Players of Prince Edward County, The Ontario Arts Council, Museums of Prince Edward County, and everyone who came to see the show. Theatre needs an audience, and we really appreciate your support!

Posted by Krista Dalby at 2:37 PM No comments:

Milé and I know that Small Pond is a special place, and we're always touched when others feel the same. Imagine our delight when our friends Elizabeth Fraser and Tom Denton asked if they could get married here! We'd hosted one wedding before so we had a good idea what would be involved, and after a bit of back-and-forthing with the couple, a date was set and planning went full speed ahead! The wedding took place on a sunny September afternoon. I'll let these gorgeous photos by Sweetheart Empire speak for themselves. 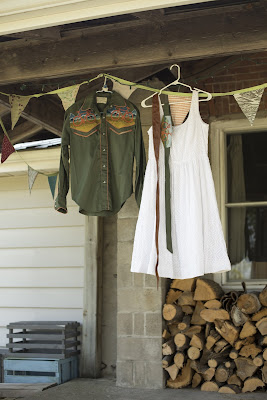 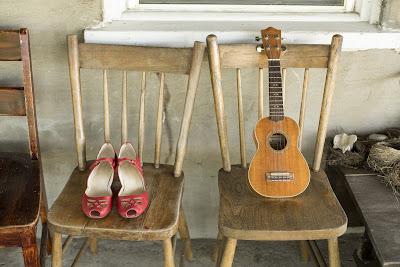 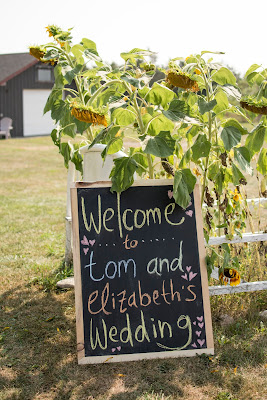 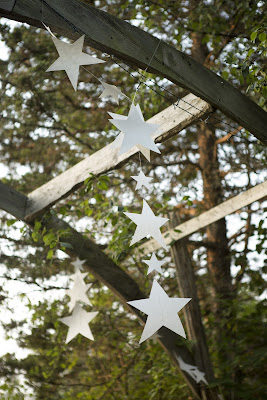 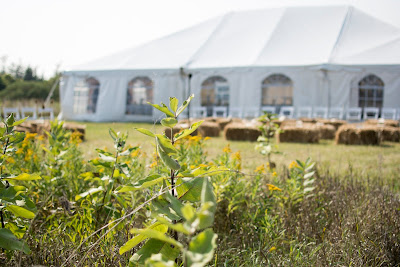 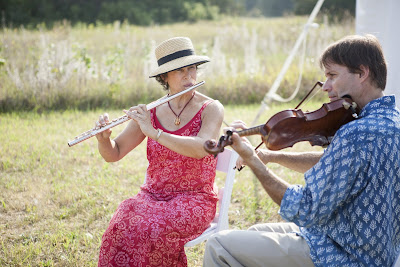 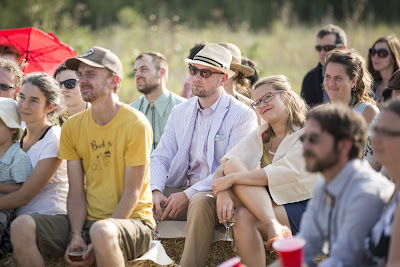 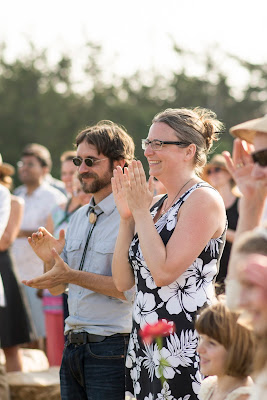 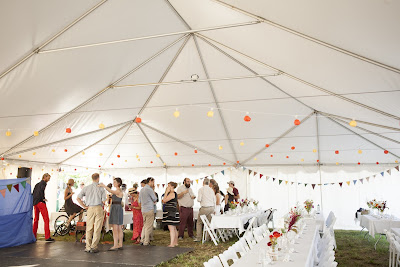 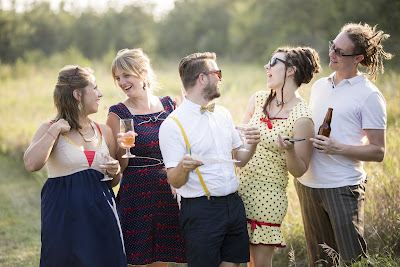 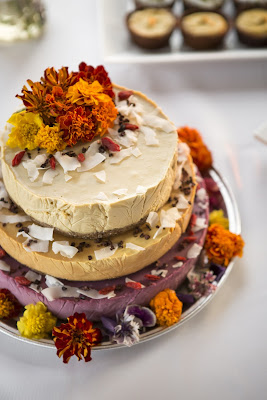 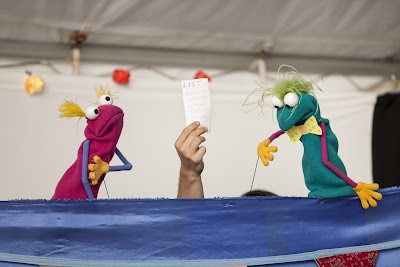 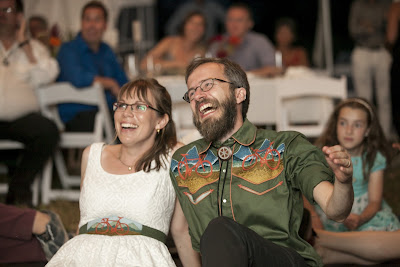 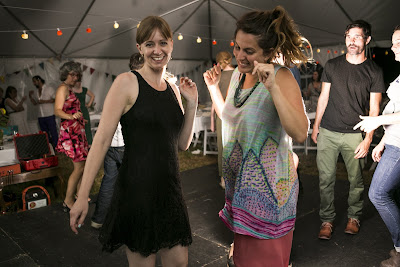 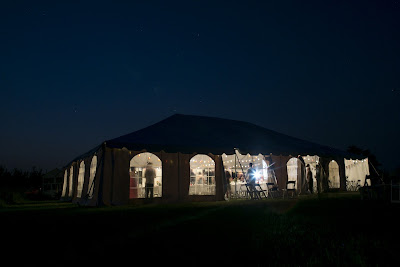 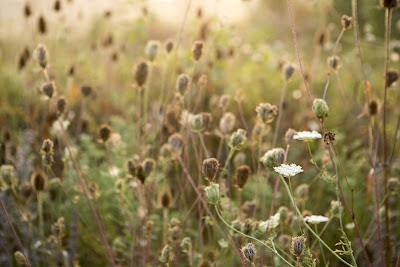 We are so grateful that Elizabeth and Tom chose Small Pond to celebrate their wedding with their friends and family around them. This place is now part of the mythology of another great love story. We wish the happy couple a lifetime of love!
Posted by Krista Dalby at 11:00 AM No comments: