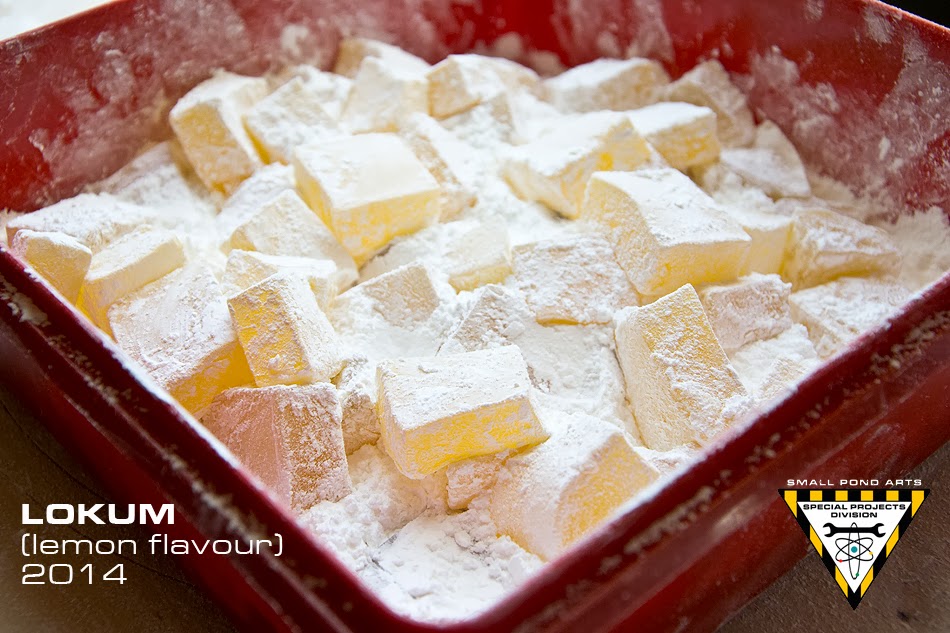 Growing up in Scarborough, a suburb of Toronto, my exposure to my Macedonian heritage was primarily through my parents, then through my extended family, then through the Macedonian community at large which we interacted with at various gatherings (picnics and dances, mostly) organized by the local Orthodox Church, St. Clement of Ohrid. My mid-to-late-1970s memories of accompanying my parents to church consist mostly of playing around with my cousins and some other kids in the downstairs banquet hall while the grown-ups did whatever they did upstairs.

Whether it was one of these social occasions or a Christening or some other event, there always seemed to be an old man selling treats by one of the doors as we all left. Sometimes I'd be in the mood for a sesame seed-covered ring of bread (the size of my face!) and sometimes I'd be in the mood for some lokum. I remember a nice fragrant rosy flavour to the pinkish ones, but there was a pale yellow variety, too, that just tasted sweet (it was unflavoured). Sometimes they had pistachios. The lokumi came in little white cardboard boxes and the treats were absolutely covered with icing sugar –fun to eat, but kinda messy. The Sunday mornings I went to church with my parents (or just my dad) were pretty much the only times I had lokumi unless we were visiting another Macedonian family and they happened to bring some out to have with coffee, so that flavour is intrinsically linked to my early childhood memories.

To me, this stuff was simply "lokum" whereas "Turkish Delight" or "Big Turk" (I won't even bother linking to it) was some weird and confusing candy you can buy in a convenience store. But real Turkish Delight is, in fact, what I'd been enjoying since childhood...and it helps people understand what the heck I'm talking about when I'm fondly reminiscing (even if they sometimes confuse it with that weird candy).

I was visiting my parents for Christmas recently and they had a box of lokumi so, naturally, I had to try some. There was a variety of flavours: orange (not bad), lemon (nice), plain (nice), peppermint (yech), and rose (the best!). Since I've already taught myself how to make graf (a traditional bean soup) I decided I should start learning how to make other Macedonian dishes from my childhood/culture like zelnik and other labour-intensive treats it seemed only my mom and my aunts ever made. I eventually learned that there's a lot of crossover between Macedonian and Turkish culture, but, as a child, of course, it was all just Macedonian. My mom gave me a recipe her sister brought back from Australia in the early 90s to help me out.

Recipe in hand, I also looked up some other recipes online and watched a few demonstrations so that I could customize the project to suit my tastes and try to replicate the treats from my childhood. The Australian recipe (and most modern ones) call for gelatin as a setting agent, but I couldn't find any in the local grocery stores, so I had to do without, which is totally fine because traditional lokum isn't made with gelatin anyway (which makes this a vegan treat, since there's no dairy involved, either). Unfortunately, the other ingredient unavailable to me here in Picton (as far as I could tell) was rosewater. As far as I'm concerned, this is THE flavour of lokum, a flavour I haven't tasted anywhere else, so it's uniquely linked to this treat. My compromising alternative was lemon (I almost used an artificial maple flavouring to make it a Middle Eastern/Canadian fusion, but I played it safe instead).


Having Macedonian music on while I cooked was vital to this project, so I selected the appropriate playlist and cranked up the volume... 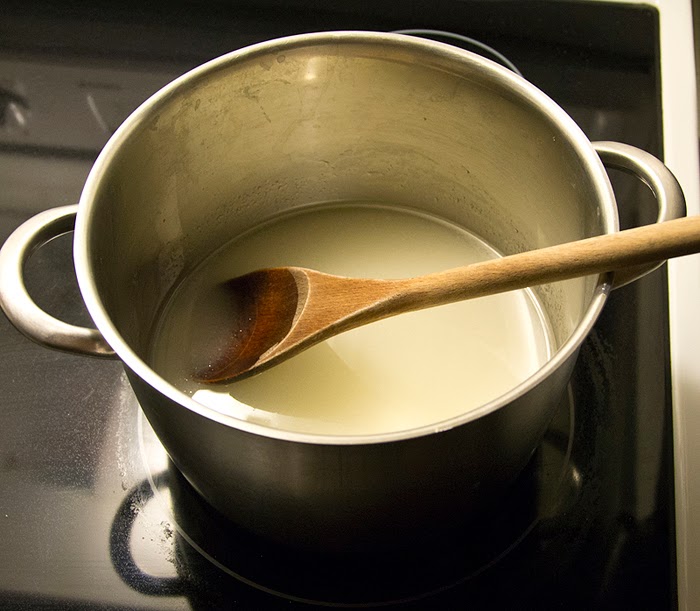 In 1 1/2 cups of water I added 1 tablespoon lemon juice, and 4 cups of regular granulated sugar. 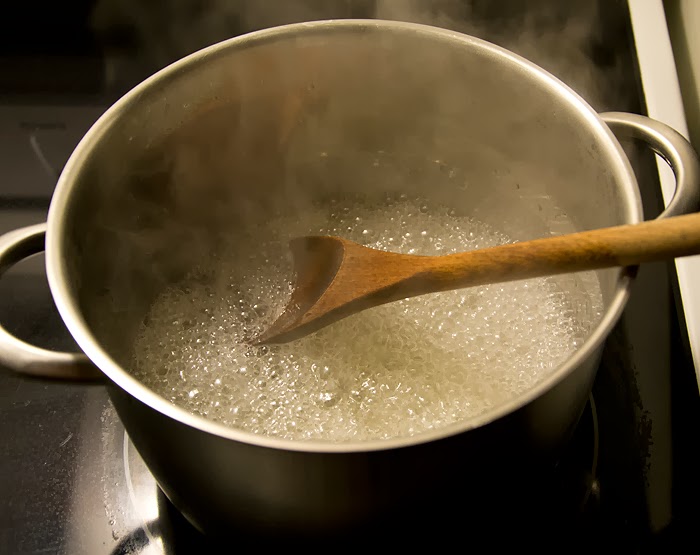 While stirring, I brought this to a boil. 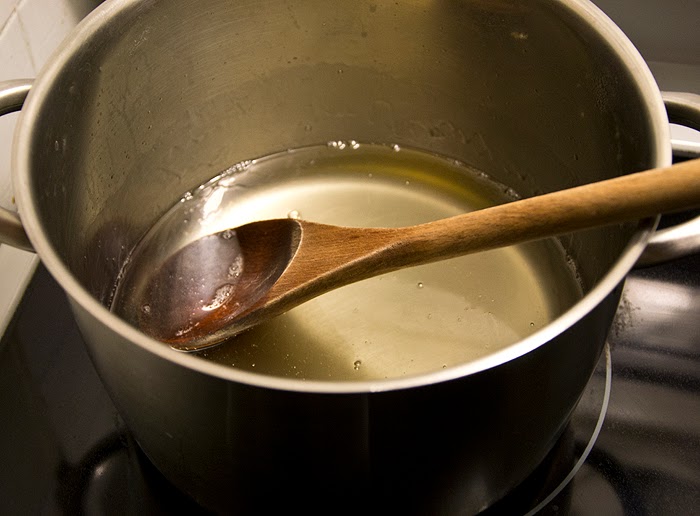 I don't have a candy thermometer (bring it to 155 degrees F if you do), so I just boiled and stirred for about 15 minutes or so, then I took it off the heat. 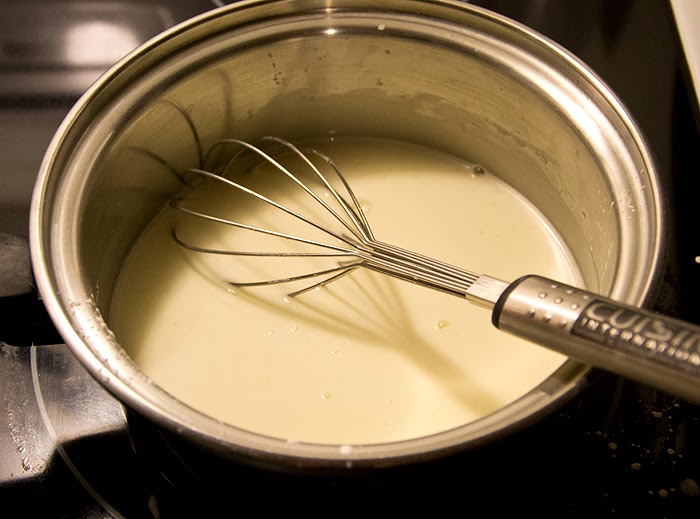 With 2 cups of water in another pot, I added a teaspoon of cream of tartar (to stop crystallization), 1 cup of corn starch (I think I should have used more...also, the Australian recipe calls this "corn flour" which confused me for a while). I tried the whisk for a bit, but realized this would take forever... 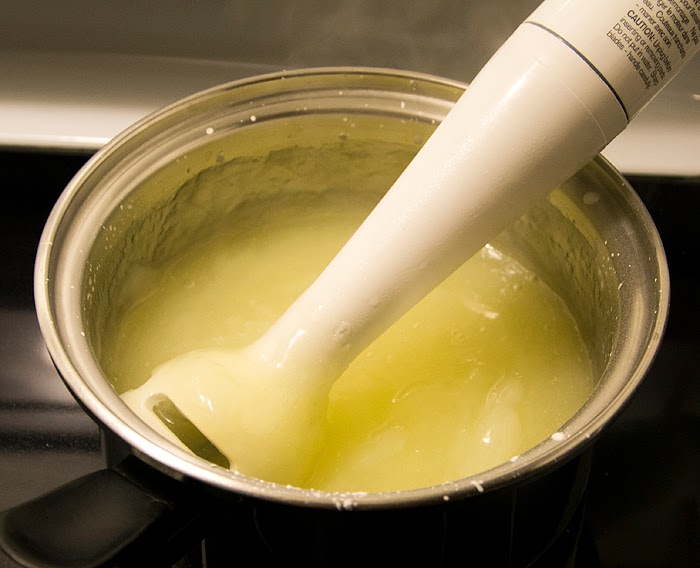 ...so I switched to the immersion blender (egg beaters would be good, too), and blended over heat. I kept blending as it came to a boil, and it really thickened up –almost like glue. 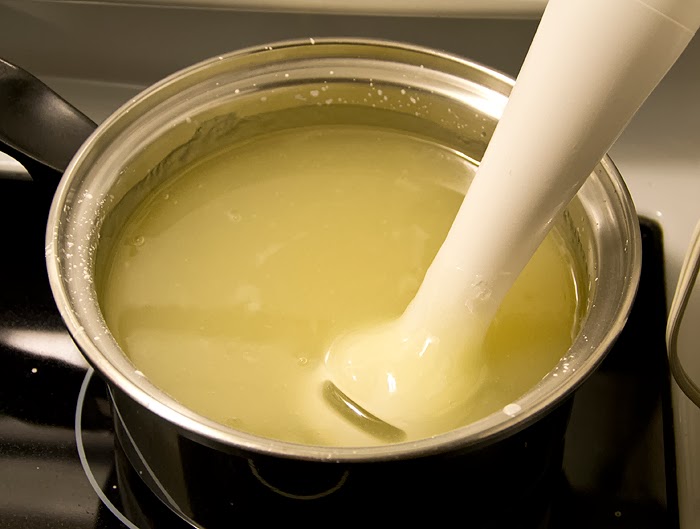 I turned the heat off and added the sugar mixture slowly, blending until smooth. 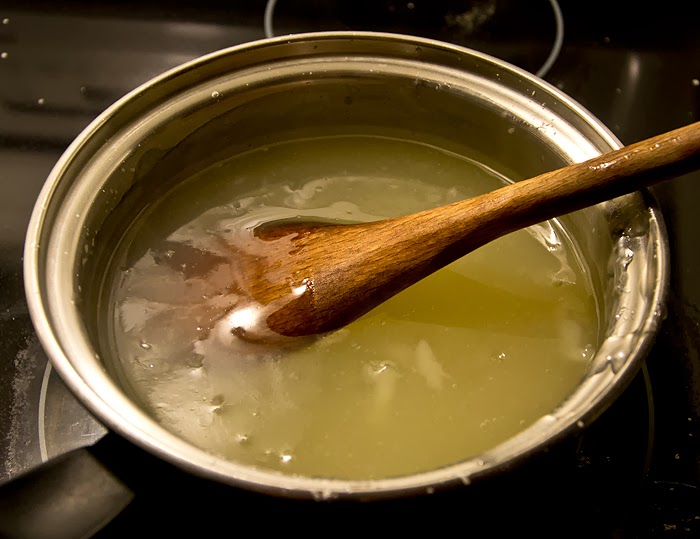 Once blended, I turned the heat up again and brought it to a boil while stirring, then turned the heat to low and kept stirring intermittently for about an hour while it simmered. 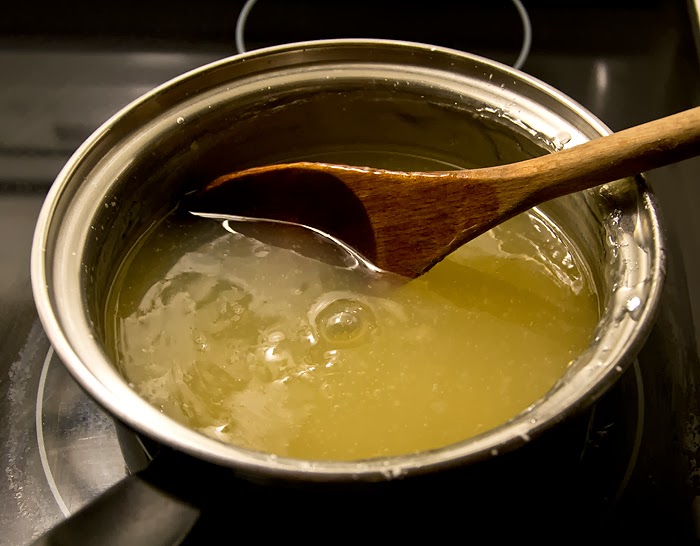 Half an hour later. 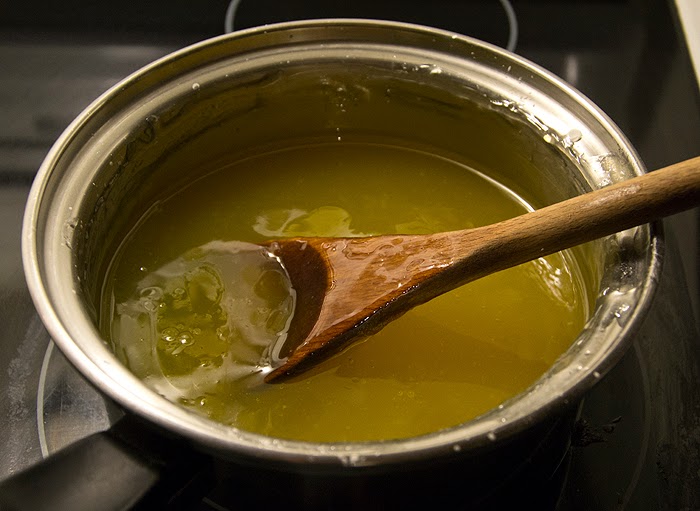 I turned the heat off and added 1 tablespoon of pure lemon extract and a bunch of drops of yellow food colouring (for fun!), and mixed thoroughly. 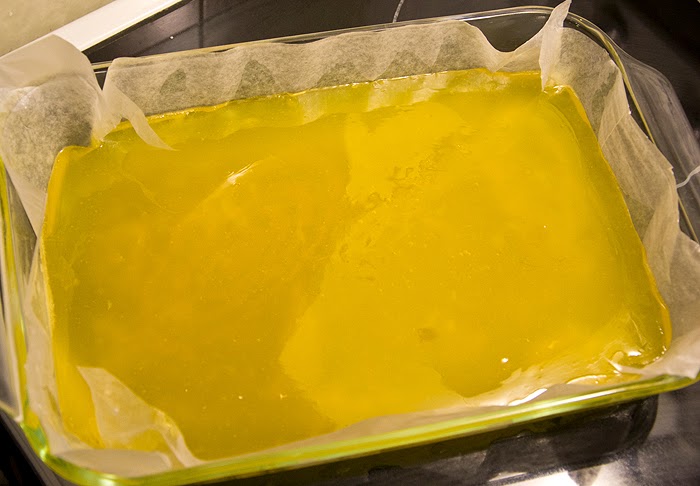 I prepared a glass pan (could be metal, plastic, ceramic...it doesn't matter) by greasing the inside with regular vegetable oil and lightly sprayed Pam on some wax paper to prevent everything from sticking, then I poured the lokum mixture into the pan. Now you let the whole thing cool down completely for about 5 hours. I let this sit overnight. 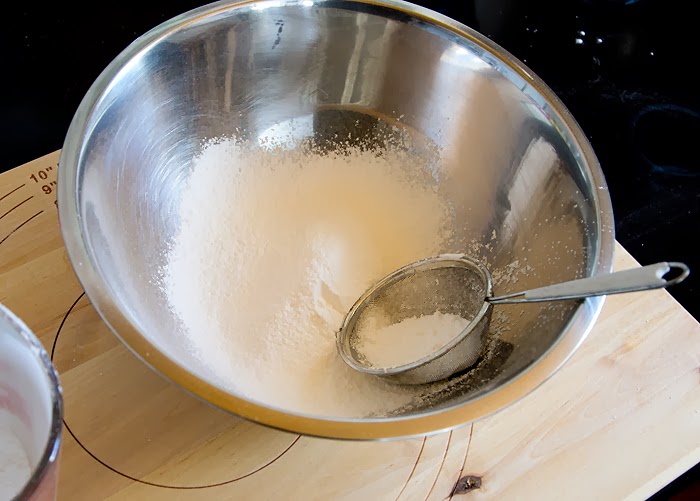 In the morning I mixed 1 cup of icing sugar and 1/4 cup of corn starch into a bowl by using a sieve to get any lumps out... 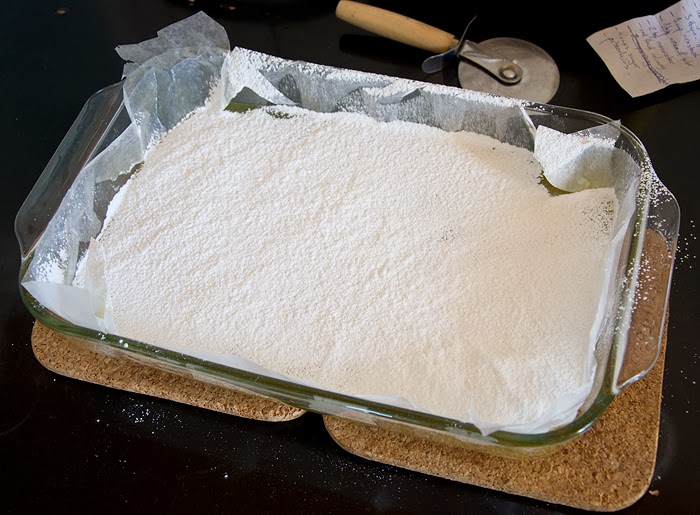 ...then, using the sieve, I sprinkled some of that mixture onto the slab of lokum... 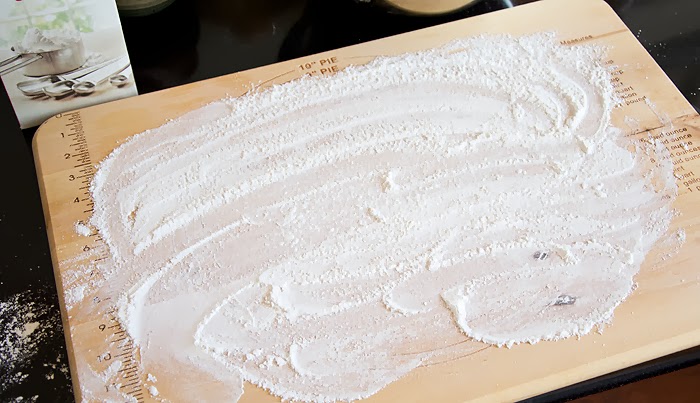 ...then I sprinkled some onto a cutting board.
That's a box of corn starch in the upper left creating a weird measuring spoons illusion. 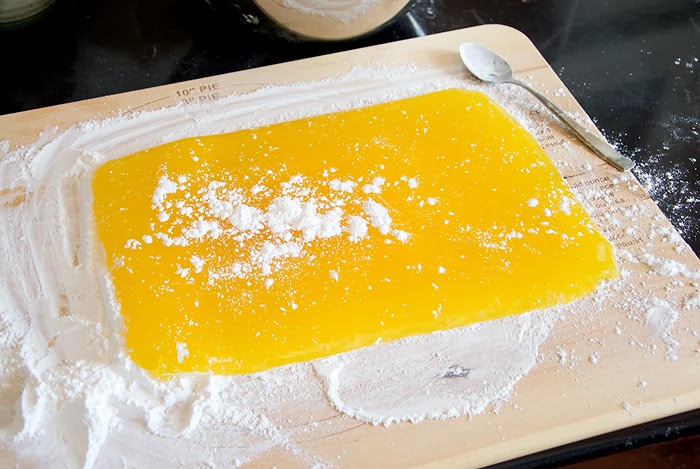 Then I transferred the slab to the cutting board (even though I was careful, there was white powder everywhere) and carefully removed the wax paper. 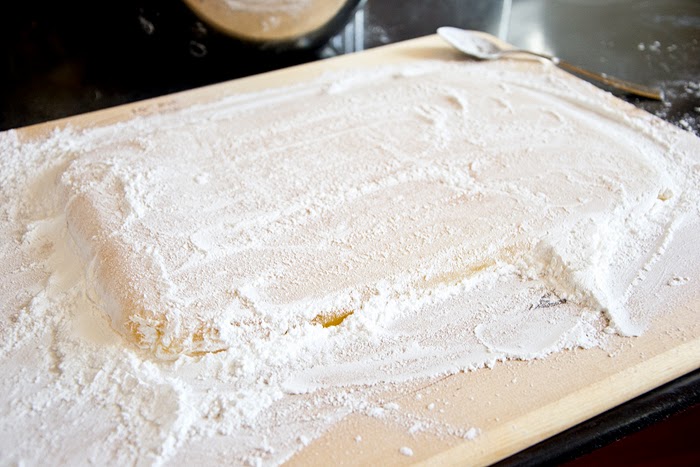 Then I covered the slab with the sugar/starch mixture and spread it around with my hands. 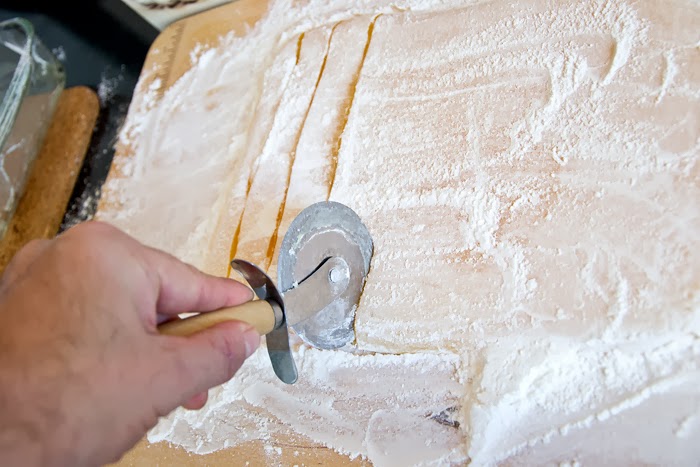 Using a pizza cutter, I cut the slab into cubes.
I'm using my left hand in this shot because I'm taking the photo with my right. 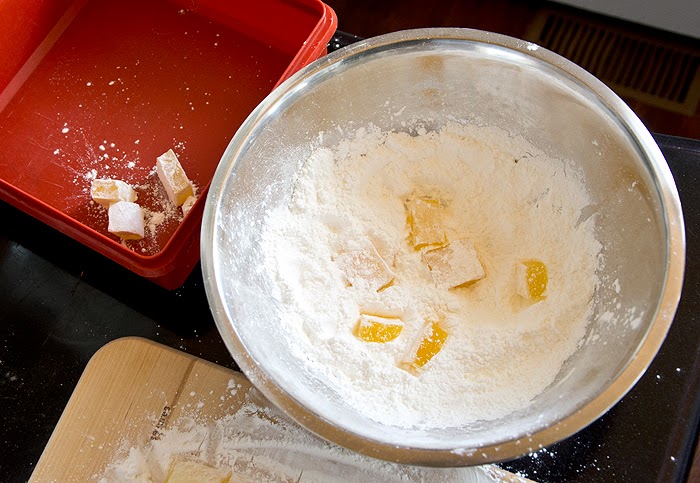 Then I separated the cubes a few at a time and dredged them in the powder to coat them thoroughly, putting the coated ones in a plastic container. This is for flavour, too, but mostly so they don't stick together. Once done, I put the rest of the powder into the container and gave it a shake to settle it all.


Verdict: the lemon flavour is good, not too strong and not too sweet. The texture is the familiar lokum texture, but I find these a bit too soft, thicker/firmer would be better –I think that's where more corn starch might have been useful in the early stages (or gelatin, who knows?).

Also, I would have preferred rosy-flavoured lokumi, maybe with some pistachios, but my first attempt was pretty good and tasty (albeit messy!).

UPDATE: A friend of mine leant me a bottle of rose water and I made another batch of lokumi today. I even dared experiment with the imitation maple extract so I split the batch and flavoured them separately in different pots before pouring: 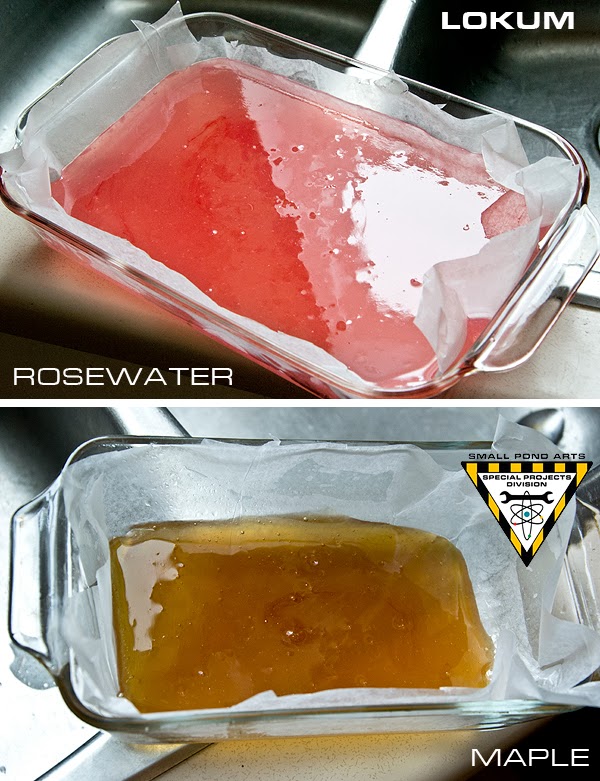 The maple is actually quite good and has a nice aftertaste (no colour added), but it was the rose-flavoured one I was really dying to try...


The rose turned out perfectly! 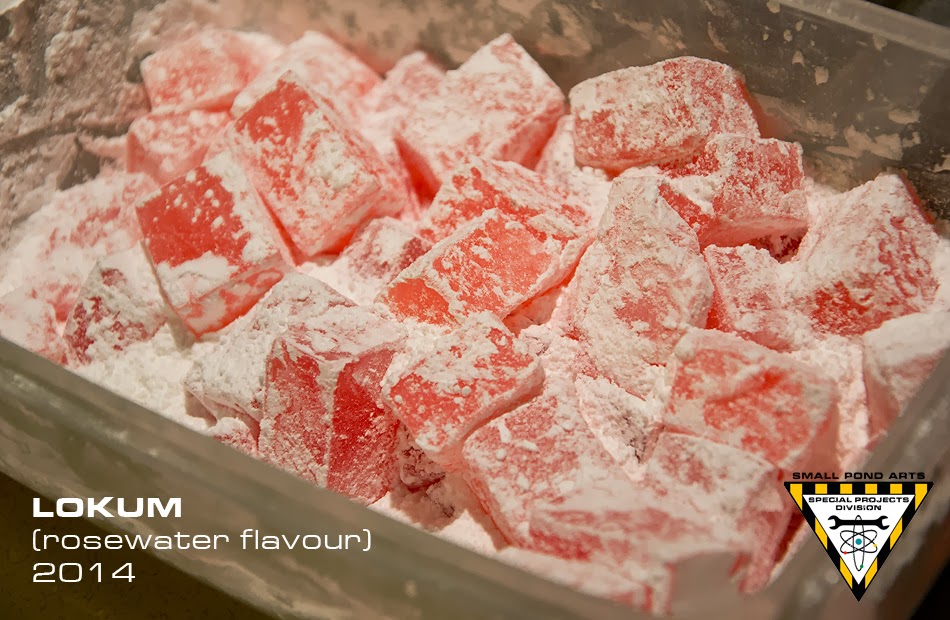 I added 3 drops of red food colouring to make it pretty.

NOTE: I used vegetable oil on the pan and the wax paper this time, but that just made the paper stickier and harder to separate from the lokum, and it had to be done carefully, to avoid weird stretching or even tearing of the treat. Last time, I used Pam For Baking and it worked perfectly.