Some time last year, a seed of an idea started to grow.  From that small idea grew the shadow puppetry play Doubt Seed that we performed a few weeks ago at Small Pond Arts. 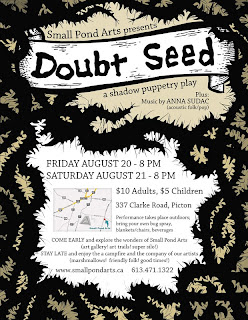 Doubt Seed is the fourth shadow puppetry collaboration between me and artists Guy Doucette and Craig Morrison. Our previous shadow plays were Wolf/Flow (a dark retelling of the Little Red Riding Hood), Leap Year Pudding, which involved more than 60 high school students, and Dreams A Go-Go, which we performed at Toronto’s Nuit Blanche and featured projections on a three-story building while puppeteers performed in the windows.
For Doubt Seed we were fortunate enough to be joined by puppeteers Sandra Henderson and Mo Morrison-Brandeis, and benefited from the help of a number of volunteers who pitched in at the 11th hour to make it happen.
Make no mistake: puppetry is serious business. If watching theatre requires a leap of the imagination, then puppetry is the long jump of the theatre world. It is in this leap that the magic of puppetry occurs, where our hearts can be broken by the careful manipulation of sticks or fabric, where we can cheer for a heroic piece of cardboard, and where we can speak truthfully about things we couldn’t say otherwise.
Shadow puppetry is a form of theatre that many people may be unfamiliar with other than in its most rudimentary form. It has a long, dignified and sacred history stretching back thousands of years and has been practiced all over the world. Shadow puppetry has been a particularly important form of theatre in Asia. In India shadow puppetry is performed in temples depicting scenes of the gods; puppets are crafted in reverent seclusion, sometimes incorporating the puppeteers’ own hair; puppets can remain in use for 100 years or more, and when they are retired, they are given a water burial, left to float away in the currents of a river. Serious business, indeed. 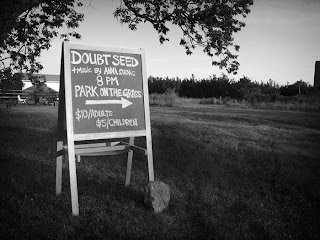 While puppetry in general seems to be in the midst of a renaissance, shadow puppetry has made recent appearances in a number of high-profile Canadian productions including Robert LePage’s opera The Nightingale and the concerts of singer-songwriter Feist. In a world of high-tech gadgetry, shadow puppetry is refreshingly low-tech, and has a sensuality that can only be achieved by raw human effort.
When Guy told me about a story he’d been writing called Doubt Seed, the story appealed to me right away and I got to work writing the script. Its rural setting and the story of a newcomer coming to town was one that I could identify with, having recently moved to Prince Edward County. My collaborators and I all have an appreciation for the macabre, and this story definitely had some darker elements. But like all of the plays that I have written, I felt there was ultimately a positive message to be told in Doubt Seed: the importance of building a strong community and sticking together to overcome our troubles.
In Doubt Seed the citizens of Wildgate learn to work together – and so it is with us artists. We have creativity in abundance and we have a powerful collective voice. We have the ability to bring people together, to make them laugh and cry and think. The week before we started building the show, a bulldozer had started demolishing a historic Picton landmark, a beautiful brick church on Main Street, much to the shock and dismay of local citizens. As artists we chose to reference this senseless destruction of local history in our play. Pictured here is a bulldozer/venus flytrap which apparently sprang from a doubt seed and is now eating the church for lunch.
Shadow puppetry is the prehistoric cousin of both film and animation, and can use a range of filmic techniques such as close-ups, wide shots, panning, cross-fading and so forth. Storyboarding is an important part of our development process.
We wanted to ensure that we were not just illustrating the monologue of the main character, but carefully crafting our images to create a unique and visually strong piece of theatre. Early on in the process we made choices about the aesthetic, and divided up the tasks to capitalize on our individual strengths. Craig is a master of character design, and we decided that he would create all of the characters. When we had our first meeting at Small Pond in the spring, we decided that he would base the character designs on us! Thusly appearing in the play are me and Milé as the café owners Georgette and Gilles, Craig as the butcher, Craig’s wife Elizabeth as Anastasia, Guy’s dad Gary as the mayor, etc.
The consistency of design served us well. Guy designed all the backgrounds and played our narrator, Wes, out in front of the screen. I designed a few things, as well as puppeteering, but most of my energy went into coordinating people, publicity, food, music, etc. We did 2 performances at Small Pond in August 2010, one night behind the barn and - when thunderclouds loomed - one night inside the barn. We couldn’t have been prouder of the finished show, it is some of our best work to date. Our evenings of shadow puppetry also featured the lovely and talented Anna Sudac, whose music perfectly complemented our show.
The best part of the whole experience was just living and working together on the farm during the creation and presentation of the show; sharing meals elbow to elbow at the dining room table, cutting puppets until our fingers were numb, bonding over late nights of bug-infested rehearsal, sitting around the campfire into the wee hours, and even midnight howling in the silo (you've got to try it!) - this is exactly what Small Pond is for: creation and artistic camaraderie.  As the first theatrical production at Small Pond, we're pleased as Punch at how it all came together.  Thanks to all the wonderful artists and volunteers, and to our audiences whose applause warmed our hearts.
Posted by Krista Dalby at 5:50 PM No comments: