I had the absolute *BEST* day yesterday. I led an installation called Cardboardia at the Skeleton Park Arts Festival in Kingston, Ontario. I showed up at the park with a van full of cardboard at 8 AM, and over the next few hours, crews of worker bees buzzed in and out, helping build this creative cardboard kingdom for kids. 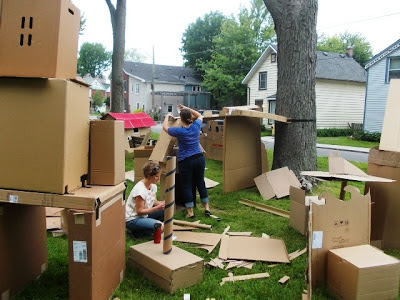 I made myself a cardboard crown and was the self-professed Queen of Cardboardia. Let me show you around my kingdom! 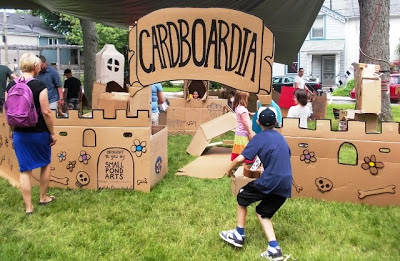 It was a rather busy place, with lots of running, crawling and peeking. 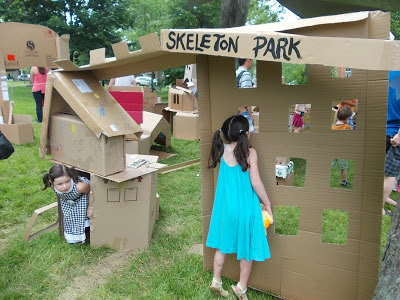 If you were lucky, someone would put on a puppet show for you. 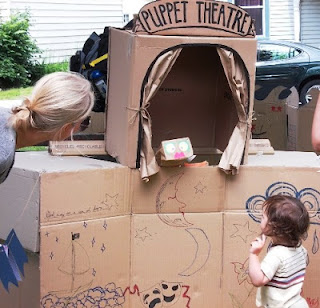 Or you could catch a performance by the Barefoot Players right outside our gates. 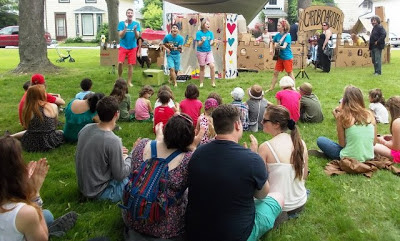 There was some rocking out on cardboard instruments... 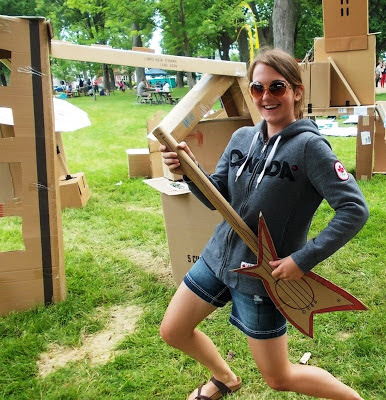 And my citizens were encouraged to draw on the walls! 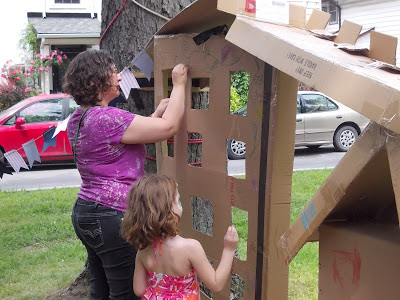 Many took trips in our time machine: 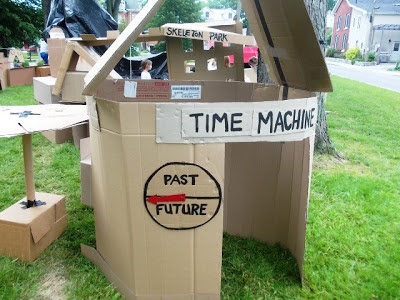 Although probably the most popular site was our barn,
complete with a menagerie of cardboard animals and a real straw bale! 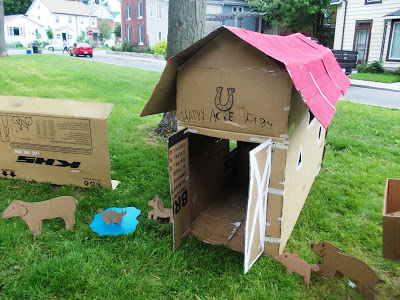 Over the course of the day, hundreds of kids enjoyed the wonder of Cardboardia. 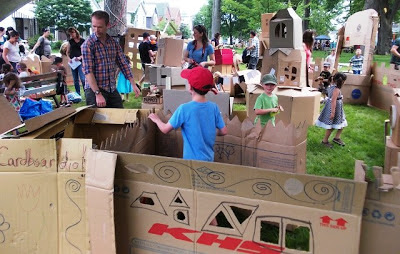 But the best compliment of all... 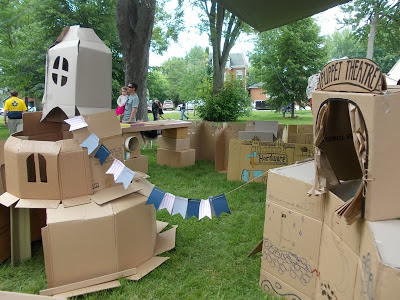 Was when they started building their own cardboard creations. 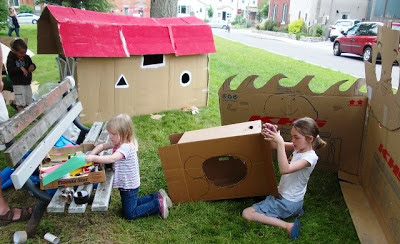 We were just one small part of an amazing festival; although I didn't get to see much of it, I snuck away for a few minutes to watch the Lemon Bucket Orchestra, playing on the teeter-totter... 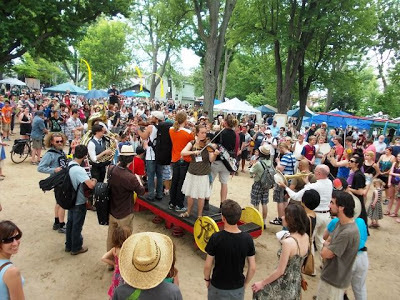 Eventually the rains came and we packed up Cardboardia for the recycling crew to take away. My sister Caitlin and I sat under umbrellas watching The Gertrudes rock out, and were delighted by children dancing barefoot and joyful in the mud... until the deluge got the better of the electrical system, and the festival came to an early close. But the mood was high - everyone had had a brilliant day.

A huge thanks to Skeleton Park Music Festival for inviting us to play, and to the many helpers who brought Cardboardia to the people!

Today we bid farewell to Georga Ryan, our most recent resident artist, who came to us from Melbourne, Australia. Georga has spent the last five weeks here, and it’s been nothing short of wonderful watching her interact with our space at Small Pond Arts. 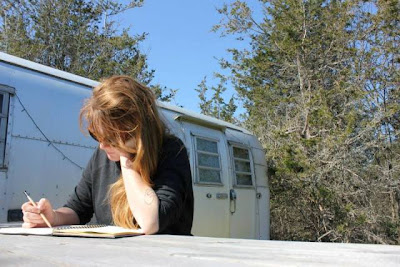 Her first projects here were a series of wind-powered drawing machines. Each had a pencil or piece of charcoal attached to a string... left outdoors for a period of time, the wind did the drawing! 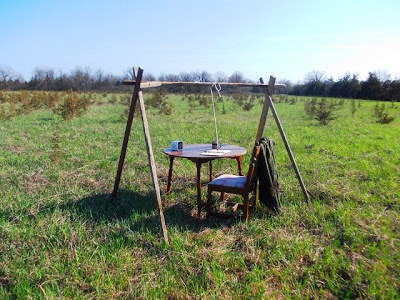 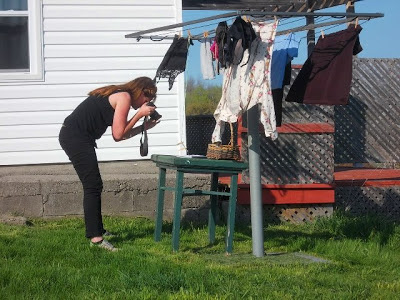 Georga set up a couple of installations in our Big Field, like this dreamy bedroom scene, which included a solar-powered reading lamp: 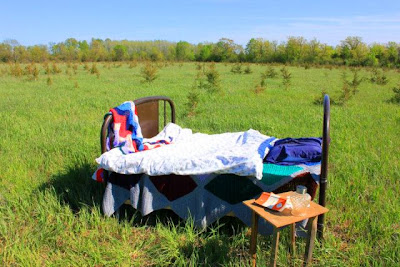 Her next project involved constructing a series of three wooden triangles woven with coloured thread, which she hung in the barn and lit with overhead projectors, to dramatic effect: 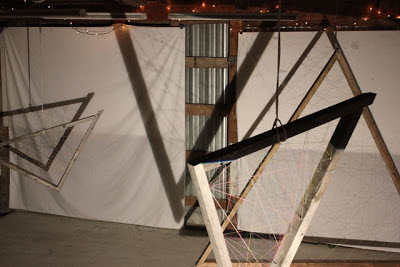 Two of these triangles can now be viewed as an installation on our Artists’ Trail. The third one she is taking with her to Burning Man in August... as she transformed it into this: 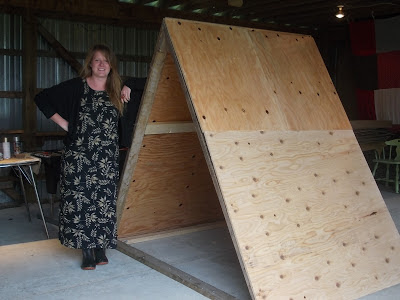 I can't wait to see pictures of this piece as she and her cohorts transform it into an installation!

Georga says of her work: People's artistic practice and process of making is largely reflective of their environment. My spatial surroundings changed from city to countryside living and this is reflective in my recent works. I was drawn to work with different materials and received an altered connection with objects that I was familiar working with.


Georga also helped out with some collaborative projects, such as our yarn-bombing project on the Artists’ Trail… 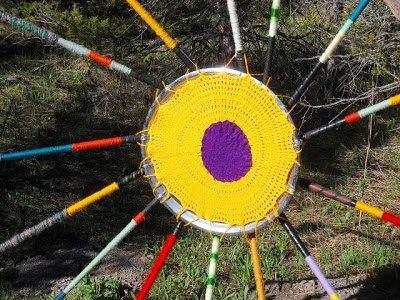 … painting moss graffiti in the silo… 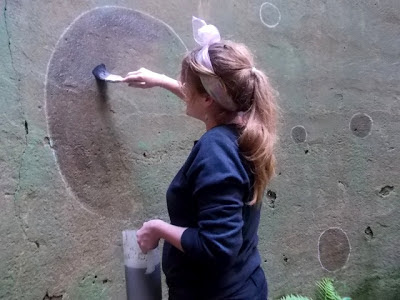 … and helping me build pieces of Cardboardia, an installation I’ll be doing at Skeleton Park Music Festival later this month. 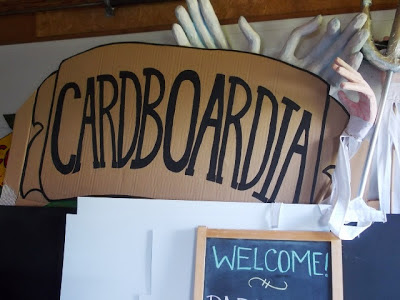 She also got to celebrate with us as we held our fourth annual Banner-Raising Party! 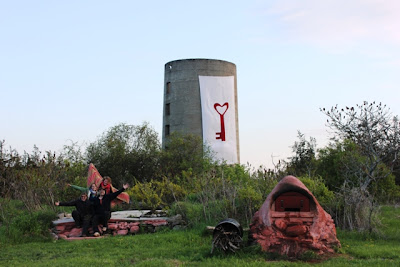 When Georga booked her residency several months back, I warned her that the normally peaceful Small Pond would become a bit of a madhouse over the May long weekend, as my sister Meagan was getting married at the farm. Ever one to roll with the punches, Georga pitched in as our bartender! 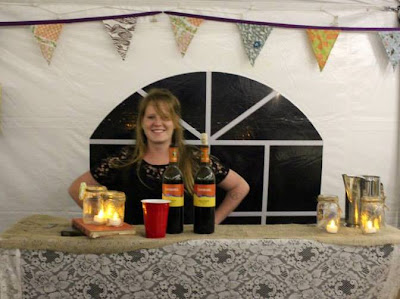 We wish Georga well on her continuing adventures!