"Should you sit around waiting until something’s become a tradition, or shouldn’t you rather roll up your sleeves and get to work developing one?”
– Rainer Werner Fassbinder 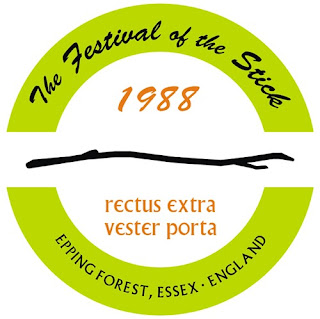 In 1988 the citizens of Epping Forest, a small town in the UK’s Essex County, held their first celebration in honour of the common stick. With the slogan “Rectus Extra Vester Porta” (right outside your door) and beloved mascot Hickory Dick (designed by Niall Eccles), the festival was a sensational hit, attracting media attention across England. Eventually, more English towns caught Stick Fever and it soon became known as the International Festival of the Stick, with festivals throughout the UK numbering in the dozens. The rest of Europe soon followed, bringing appreciation of the lowly stick to more and more people each year, and by 1996, more than thirty-five countries were hosting stick festivals. 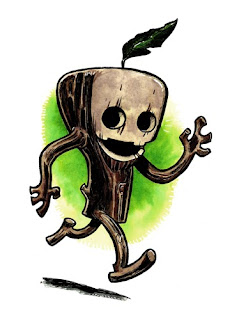 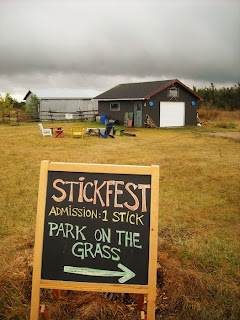 We made it up.

We decided that the International Festival of the Stick would be an inclusive, community-oriented event that everybody could afford to attend, the price of admission being one stick. As an early-bird promo, when people visited us, we put a stick under their windshields that had written on it "This stick is your admission to Stickfest 2010 at Small Pond Arts”. Likewise, these stick invitations were left in mailboxes, at local cafés, etc.  Our initial idea was that whoever brought that stick to the festival got a treat, but then we decided to just give treats to everybody. When someone arrived without a stick, that was okay; we gave them a stick. 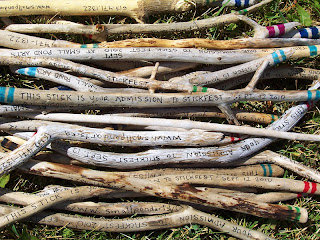 Krista spent a week trimming branches from the fallen Hesperus to make the River Styx out of sticks. 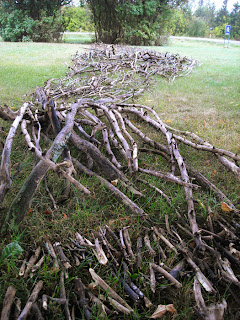 Another outdoor stick-based installation was Caitlin Dalby’s beautiful giant nest. This was made back in May and is a permanent installation on our artists’ trail in the woods. People love climbing into it and having their picture taken. 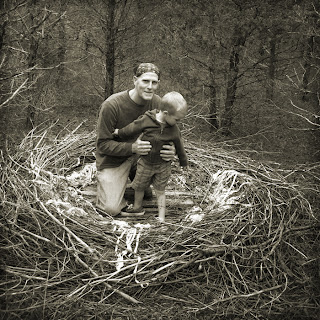 The centerpiece of Stickfest was The Museum of the Stick in our barn where we featured all kinds of sticky items: 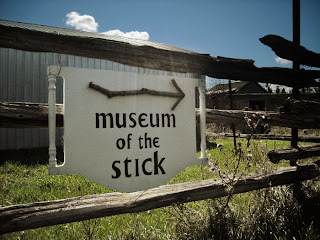 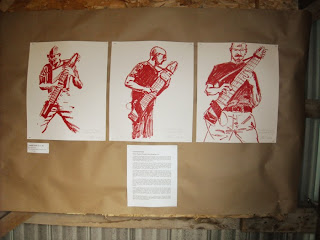 Local illustrator Carl Wiens contributed an illustration of The Amazing Stick, encapsulating the versatility of sticks since their very beginnings. 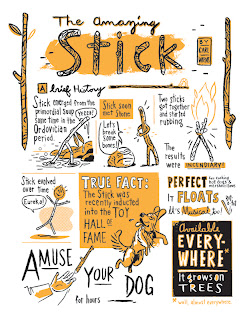 My sister, Lena, had made some delicious mini sticky buns for all to enjoy: 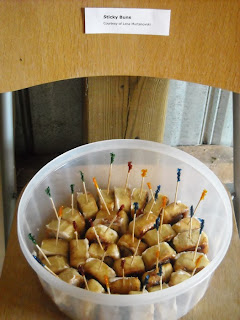 Also in the food part of the display were a beef stick, Fun Dip with its famous hard candy Lik-A-Stix, and Hickory Sticks in all their salty goodness.

In a series of three shadow boxes were displayed a lipstick, a deodorant stick, glow sticks, incense sticks, matchsticks, chopsticks, a memory stick, a ChapStick, and a glue stick. 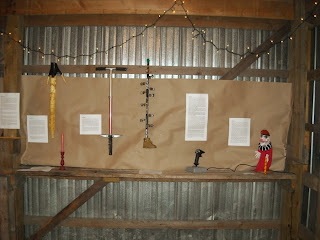 Other museum items included a pair of drumsticks (the musical kind, not the part of a fowl’s leg…or the ice cream confection), another beautiful carved stick by Peter (this time a salmon carved into a piece from one of our own trees that fell over this summer), stickers, a walking stick, a didgeridoo from Australia, a yard stick, a rain stick, and an Olympic hockey stick. 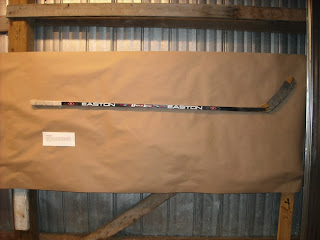 Then there’s my favourite part of the museum: the Mascot Gallery. Children from all over created extremely imaginative interpretations of Hickory Dick.  I really wanted to have a children’s component to the museum and I was so happy to receive and install so many amazing pieces of art. 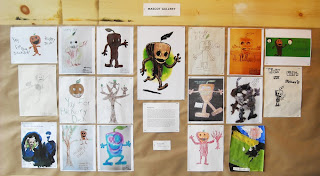 We also set up a painting station where visitors could decorate their own sticks, all the while listening to sticky music on the stereo (including Gregory Hoskins and the Stickpeople, musicians playing the Chapman Stick (including Tony Levin), and, of course, Styx). Some of these painted sticks were later incorporated into the River Styx. 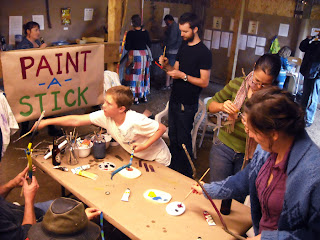 When the crowd was at a critical mass, we began the entertainment portion with readings. I was up first with a reading of The Trees by Neil Peart, Krista read her poem Sugar Maple, and finally, Colin Frizzell read a brilliant piece which he wrote specifically for this Stickfest, called The Glory of the Stick. 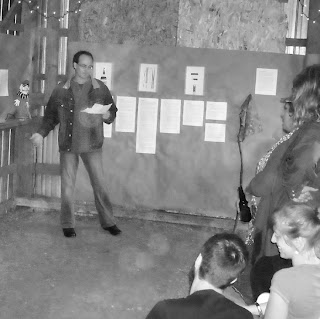 In the bottom right of the photo above is Dianne Lee, who created Stick Cozies, complete with instructions, for people to keep their sticks, well, cozy.

After a while, folks gathered around the fire pit (fortunately no sticks were burned that day) and partook of carrot and celery sticks. Some people even took to whittling sticks and knitting. 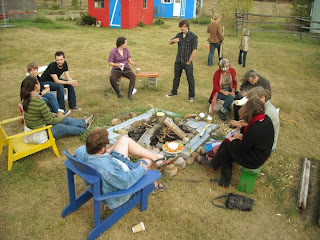 Some people even learned to walk on big sticks. 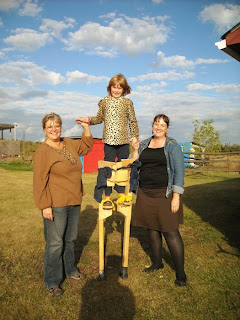 We were really impressed that our community so willingly took to Stickfest and came out in such great numbers.  We’re already looking forward to Stickfest 2011 – aren’t you?
Posted by Milé Murtanovski at 12:03 PM No comments: