Here's a shadow puppet music video we made a while back at Small Pond. You can read about the making of the video below. Enjoy!


Each August, the puppeteers of Shadow of a Doubt Collective descend on Small Pond Arts to work some magic and create a live shadow puppetry show. We had intended to do so again this year, but due to some personal issues we were unable to go ahead.

Craig Morrison and I still wanted to make something, so he suggested that he and I do a music video. It had to be done quickly; the last days of the summer were upon us and we both had other fish to fry. Craig wanted to use Small Pond as the setting of the video, and I started thinking about music. It didn't take too long to find the perfect song, Home, by local band Nine Mile. The refrain about "never want(ing) to go home” resonated with me, because that's what so many of our resident artists say when it's time for them to leave! I asked the bands’ front man, D’Ari Pouyat, if he’d be okay with us making a video, and having no idea what he was agreeing to, he said yes!

Craig and I jammed on some ideas; I came up with a script and he started cutting puppets. When he arrived at the farm pretty much all of the character puppets were finished. As so often occurs with Craig's designs, the characters all looked very familiar... not only were the members of the band represented, but there was a puppet of me at the oven, Milé on stilts, and Craig and his wife Elizabeth - as Sasquatches! Craig and I spent two long days in the barn, cutting and ‘sticking’ puppets. Our friends Lindsay and little Sebastien came out to help.
As there were some scenes with a lot going on, I knew we needed many hands on deck, so I put out a call for puppeteers, and four awesome local women – and first-time puppeteers - responded. Kingston puppeteer/filmmaker/musician Josh Lyon came to mind as a potential collaborator, so I contacted him, too, and he responded with enthusiasm. Such is the beauty of working in a puppet "collective" - new members come and go on a very fluid, informal basis.

It was the day of the shoot, and Josh and Susanne arrived in the afternoon. Then Craig broke his thumb and went to the hospital for a few hours. Josh took some time out to play accordion in the silo. 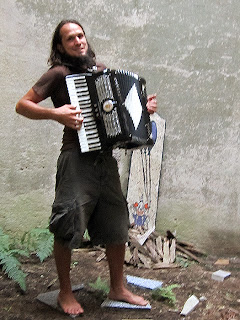 Everyone else showed up around dusk, and without a moment to spare, we launched into shooting. The whole thing was shot in three wild and woolly hours with Josh behind the camera and Craig and I tag-team directing. Josh took the footage away and worked his editing magic, and ta-da! A music video is born.

In case you’re wondering Why Sasquatches? Why lightning bolts?  you can read about that HERE.

Thanks to everyone who helped out - it was so fun working with all of you!
Posted by Krista Dalby at 12:49 PM 1 comment:

Our annual Scarecrow Festival took place last Saturday and Sunday over the Canadian Thanksgiving weekend, and once again, it was a great success. 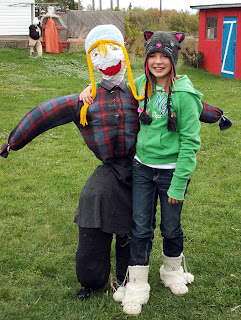 How can the success of such an event be measured? It could be measured in smiles… 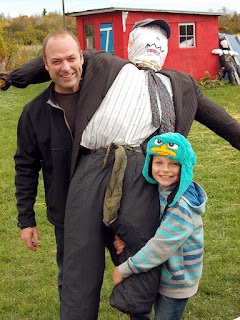 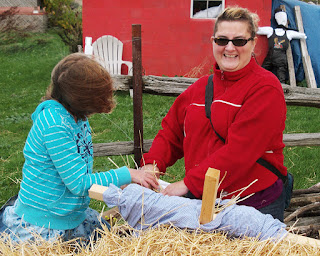 Or by the number of people who showed up… 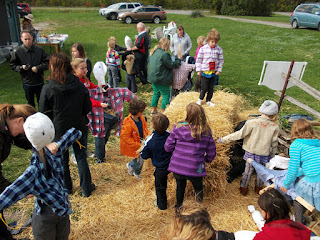 Or by the number of scarecrows that were made… 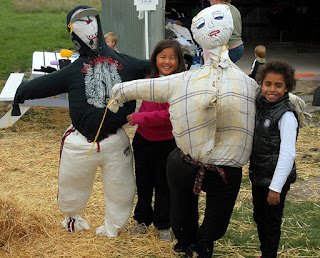 Or by the artistic merit of the creations… 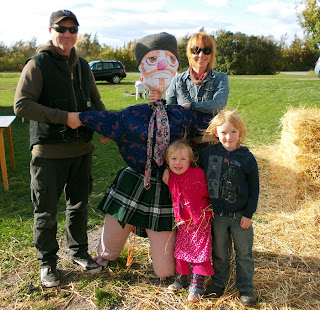 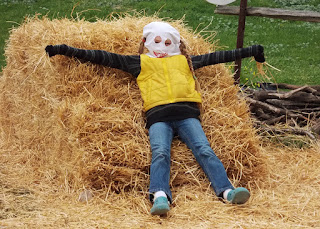 Or by the sheer awesomeness of our weekend visitors… 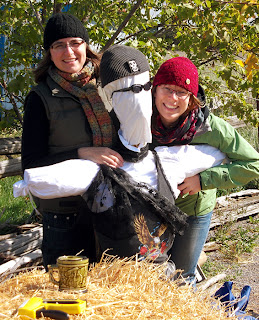 Or by the money that was raised for Puppets Without Borders… which was nothing to sneeze at!

Although the weather was a little on the windy and chilly side, so many enthusiastic folks and families came out, it was pretty hard for us to resist grinning all weekend long. 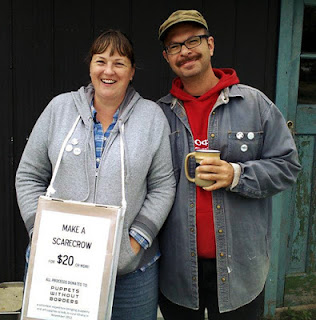 Thanks to our generous sponsors for making this year's Scarecrow Festival the glorious event that it was: Picton Home Hardware, George Emlaw, Picton Metro, City Revival, Andrew & Emily’s No Frills and all the folks who made goodies for our bake sale.

We’ll be doing it all again for Thanksgiving 2013 – so see you then!
Posted by Krista Dalby at 7:50 PM No comments:

This fall Small Pond has been positively abuzz with activity. I've been working like mad on my project Puppets Without Borders… and then there was Stickfest… but oh no, that is not all! A few weeks ago we hosted the Experimental Lantern Laboratory, which was the first creative step in what will become the inaugural Firelight Lantern Festival in the works for April 2013. We brought together artists and community members in a free-form workshop, where they could play around with the materials and make anything they wanted. 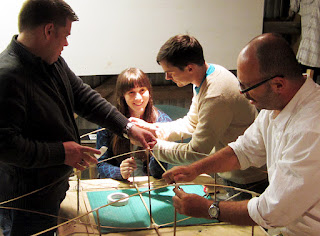 Many worked in pairs; everything is more fun with a friend. 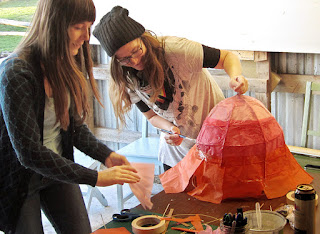 In the month prior to the festival, these creative souls will be our workshop leaders, going out into the community, hosting 20 workshops around Prince Edward County. They’ll be working with people of all ages to create lanterns which everyone will bring to the festival and carry in the procession. Other lanterns will be made to hang in shop windows on Main Street Picton. 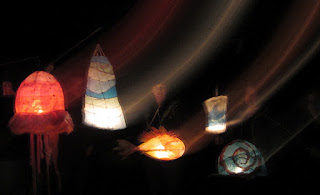 We call ourselves The Department of Illumination. Our goal is to bring our community together and light up the night with creativity. If this initial workshop is anything to go by, I think that we’re in for an amazingly fun time.

This past weekend we hosted a writer’s retreat let by Chris Kay Fraser of Firefly Creative Writing, called “Spark Your Creative Fires for Fall.” With eight participants, including myself, it was a weekend filled with not just words on the page, but also with great kindness – both to each other, and to our creative selves. 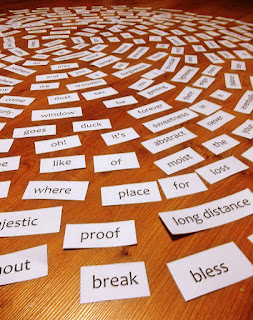 Chris led us through a series of writing exercises and prompts designed to get our engines running.

There were two periods of completely silent writing time, where we were encouraged to not even make eye contact with one another, and were free to work on whatever we liked. 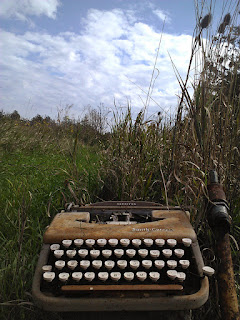 I love having a house full of writers. People moving about in silence, respecting the tranquility of others and finding space for their own thoughts. The constant flow of caffeinated beverages, keeping those big, beautiful ideas silently blooming in every corner of the house, the yard, the grounds. What I will remember most was on the second night, when the silence was broken, and people shared the stories and poems they'd written. It was very moving to listen to all of these incredible, vivid, inner worlds bursting out into the world for the first time. We discussed how we could tell when a piece of writing was “good,” and one of the writers said, “I know a piece of writing is good when it makes me want to cry.” I sense that I wasn't the only one who had a lump in their throat that night. 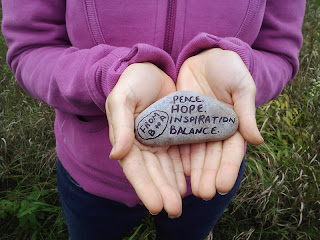 On our last morning together, and as our last act as a group, we each wrote on a rock a few words that were meaningful to us. 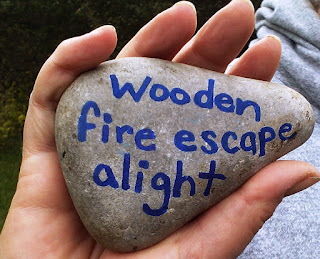 We walked out to the woods, relishing these last moments as our time together drew to a close. We placed our rocks in the forest, amongst the other art on the artists’ trail. 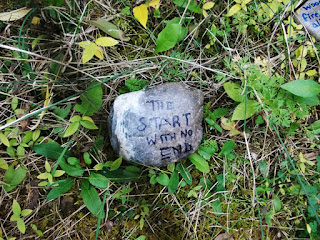 Then Chris gave us one last gift, reading us a poem, stoking the fires within us with one last breath of wisdom and beauty.

Although autumn is often thought of as a time of endings, this year the fall seems rich with new beginnings; small, precious fires that will keep us warm all winter long. 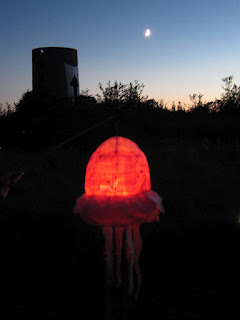 Posted by Krista Dalby at 8:40 PM No comments: