Live daringly, boldly, fearlessly. Taste the relish to be found in competition - in having put forth the best within you.
- Henry J. Kaiser

None so little enjoy themselves, and are such burdens to themselves, as those who have nothing to do. Only the active have the true relish of life.
- William Jennings Bryan 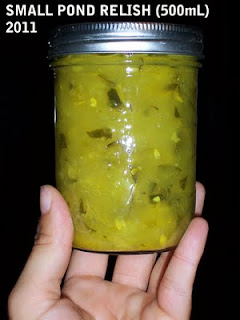 You may ask yourself,
"How did I get here?"


Krista and I just finished canning (in jars, actually) our first batch of "Pappy Relish," a Dalby family recipe I fell in love with while visiting her grandparents years ago. I'm happy to carry on this tradition, but happier to have learned how to successfully make preserves on my first attempt, confidently setting the scene for future canning projects.


But how did we end up with these jars of sweet relish?
Strap yourself in and set the Wayback Machine to December 2010... 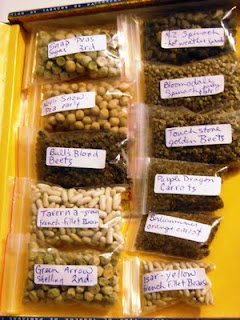 
Just before Christmas, we attended the Busy Hands Craft Sale to visit a bunch of friends who had great homemade wares on offer, but specifically to get some seeds from another friend, Vicki Emlaw of Vickis Veggies. She had dozens of varieties of vegetable seeds, most of them heirloom varieties, and we scooped up a number of goodies...including cucumbers. 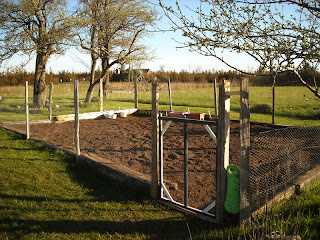 
Krista spent weeks out in the cold of March restructuring the garden to be roughly twice the size it was last year. I helped put up the chicken wire and then roto-tilled the soil to prep it for planting when it got warmer (see an action-packed photo in this post). 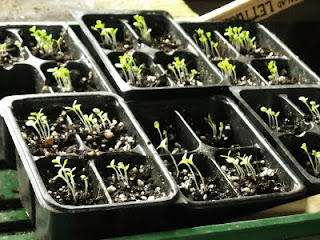 
Meanwhile, many of the seeds we bought were sprouting in our gardening shed, craning towards the faint light of early spring. Like last year we're using only water from our rain barrels (or from the well using indoor taps if we run a little dry like last summer) to water the plants, and we put used coffee grounds from Chesterfield's Homegrown Café and horse manure in the soil to fertilize it before planting (we'll eventually use compost from our bins once it's ready). We're not "certified organic," but we don't use any pesticides or herbicides, opting to grow our food as naturally (i.e. organically) as possible. 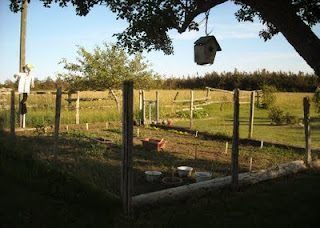 
Under the protective watch of our scarecrow, Socrates, the transplanted veggies took hold and flourished, giving us mini-harvest after mini-harvest for weeks... 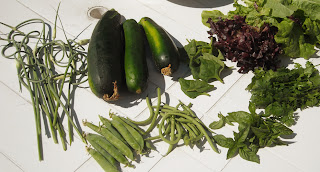 
Clockwise from far left: scapes from the garlic we planted given to me by the Garlic Man; the zucchini that keeps on giving; perfect spinach; the red and green leaf lettuces are a daily harvest; cilantro; basil; beans; and shelling peas. 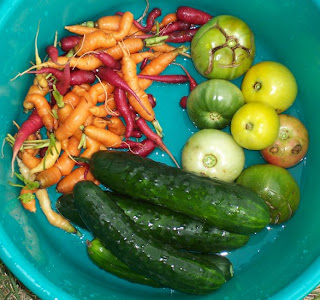 
Heirloom carrots and tomatoes, and...cucumbers. Most of the food  we're eating by now comes from our garden. We even managed to feed lots of hungry artists during Cornography with lots of fresh homegrown veggies. 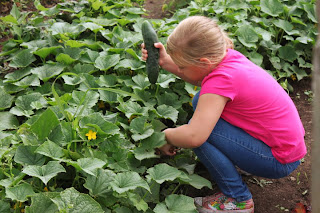 We're bound to be overrun by something: last year it was lettuce that we were giving away to anyone who visited; this year it's been zucchini, spinach, lettuce again, and recently, it's cucumbers, cucumbers, cucumbers. Delicious, healthy, hearty, gorgeous, crisp, but abundant cucumbers. 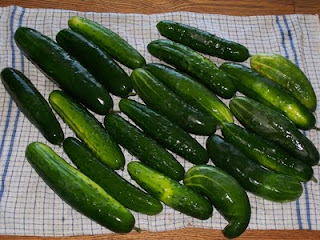 Like, seriously, we get this amount every four or five days.

"We should preserve them: pickle them or something," I said to myself.
"Shut up," I replied.
"No, really, how hard could it be? People have been preserving food for millennia."
"Shut up," I said again, hoping I would leave myself alone (I had paintings to finish!).
"Look, what about that great relish that Krista's grandfather makes? You love it! You could try making it yourself!"
"Hmm, relish..."
"Yes: relish."
"YES. RELISH." 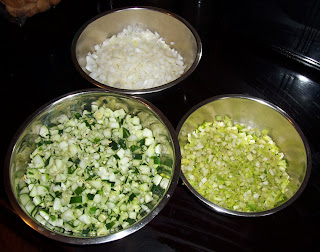 His recipe calls for onions, celery, and cucumbers as the main vegetable ingredients. The celery (and, of course, using only natural ingredients) helps to significantly distinguish this relish from, and elevate it above the store-bought stuff.

Here they are, chopped by hand (unfamiliar with our food processor, I was afraid I might end up chopping the veggies too finely with it; I wanted to better control the size of the chunks --and keep the learning-of-many-new-things-all-at-once to a minimum). 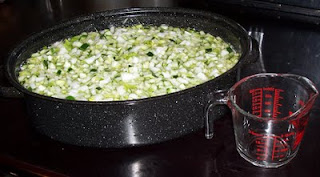 Add lots of salt and water for the brine, then refrigerate for 24 hours (or overnight, at least). This keeps the veggies crisp and gives you a whole day to realize and accept what you've just committed yourself to. 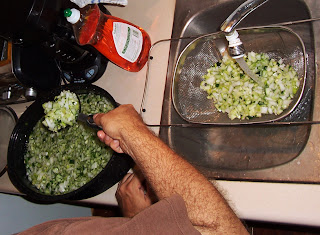 Rinse the veggies thoroughly with cold water to get as much of the salty brine off them as you can. Make sure you don't knock over that dish soap into the veg mixture. 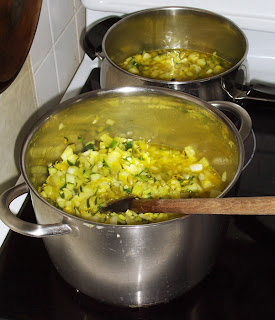 There was too much for the pot, so I split it up to cook better (and make stirring easier). I didn't want the relish to be neon green (via food colouring), so I added turmeric for a yellowish colour (and extra flavour). Meanwhile, the jars were being sterilized in boiling water just out of frame. 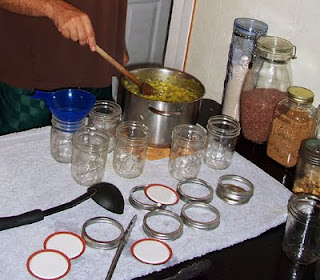 Stand by for action.

Krista joined me during the cooking phase and our teamwork made the task of jarring the relish smoother. Plus, we like dancing in the kitchen. 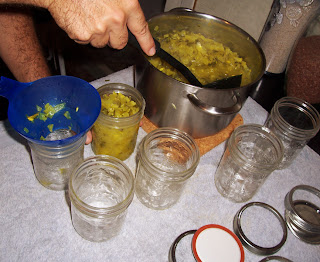 We sterilized six jars thinking that would be enough, but we put in two more at the last minute. The initial recipe said it would yield 16 half pint jars, but I increased the quantity of ingredients to use up as many cucumbers as possible (believe it or not, I managed to use up only six of them!). 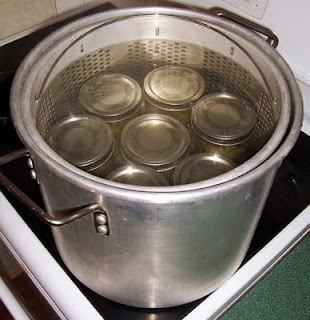 We filled eight 500mL jars in the end (4L total), but only vacuum-preserved seven (the last one will have been eaten by us by the time you've finished reading this).

As the jars cooled, they gave a distinctive and satisfying "pop" as each lid announced the seal was formed well and that that jar of relish would last for a year (or more!) in a cool, dark place.

So there it is. I wish you could taste it. In fact, I haven't tasted it myself just yet, since it's still hot; I'll have to wait until tomorrow morning.

The Small Pond Arts Canning Adventure (to use up all them damned cucumbers) will continue with Bread & Butter Pickles this weekend... 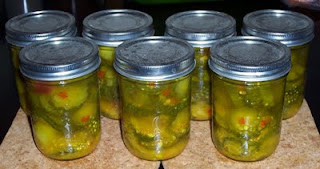 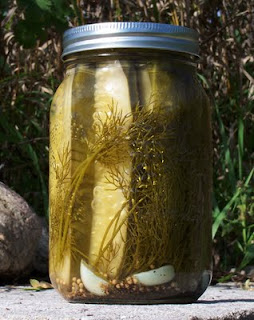 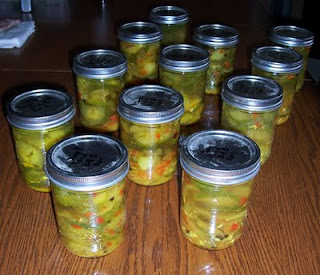 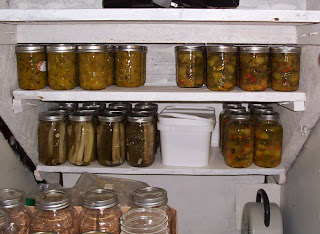 As part of our Cornography event we asked our audience to write down, on corn-shaped pieces of paper, their responses to "My dream for the future of food is..." These dreams were then paraded through the forest, accompanied by a young fiddler, and 'planted' in a field. 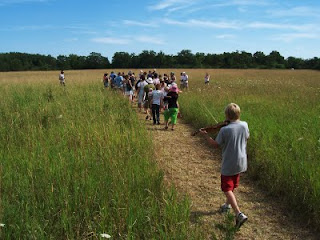 We called this The Corn Field of Dreams.  I found the responses that people wrote very moving and occasionally hilarious.  Here they are.

MY DREAM FOR THE FUTURE OF FOOD IS: 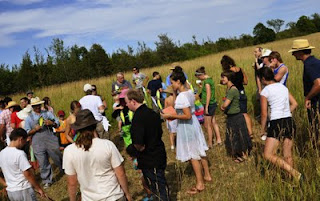 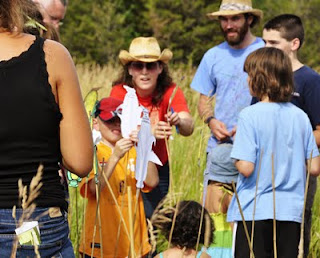 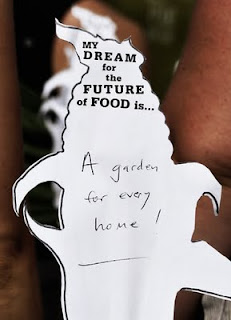 Thanks to everyone for sharing their dreams.  Let's keep dreaming together!  To read more about Cornography, click HERE.

Posted by Krista Dalby at 9:25 AM No comments: