This past Saturday I found myself headed to Kingston shortly after dawn with my husband Milé and a van full of cardboard. I had a mission:  to build a creative kingdom for kids, namely Cardboardia at Skeleton Park Arts Festival. 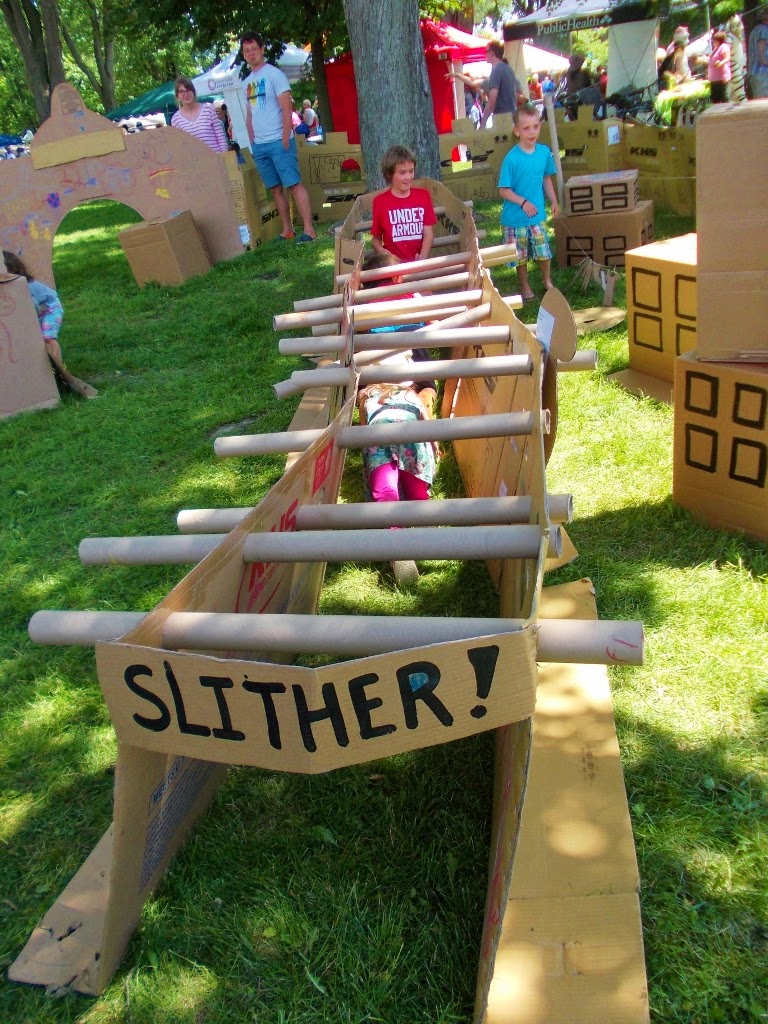 I've done Cardboardia a bunch of times: at Clay & Paper Theatre's Day of Delight, in our Art Barn for a very cool toddler's birthday, and at Skeleton Park last year. You can tell that I've got a cardboard project coming up when I start skulking around back alleys on recycling day.

The key to a successful Cardboardia, for me, is prepping lots of stuff in advance, and having some spectacular volunteers willing to show up early in the morning to help set it all up.

Although I got a bit fancy putting googly eyes on bats and bees, much of my advance painting used simple black outlines. I brought along tons of art supplies, and the whole cardboard village turned into one giant 3D colouring book. 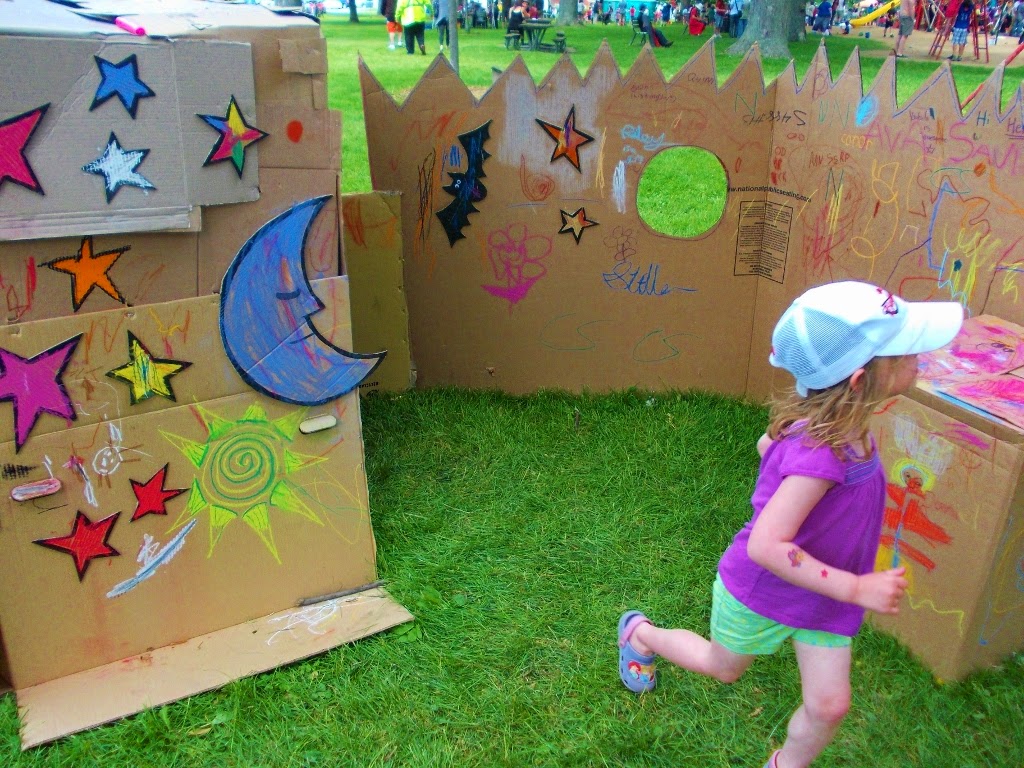 New this year, I also created an art gallery, so kids could sit and make whatever they wanted and hang it up. 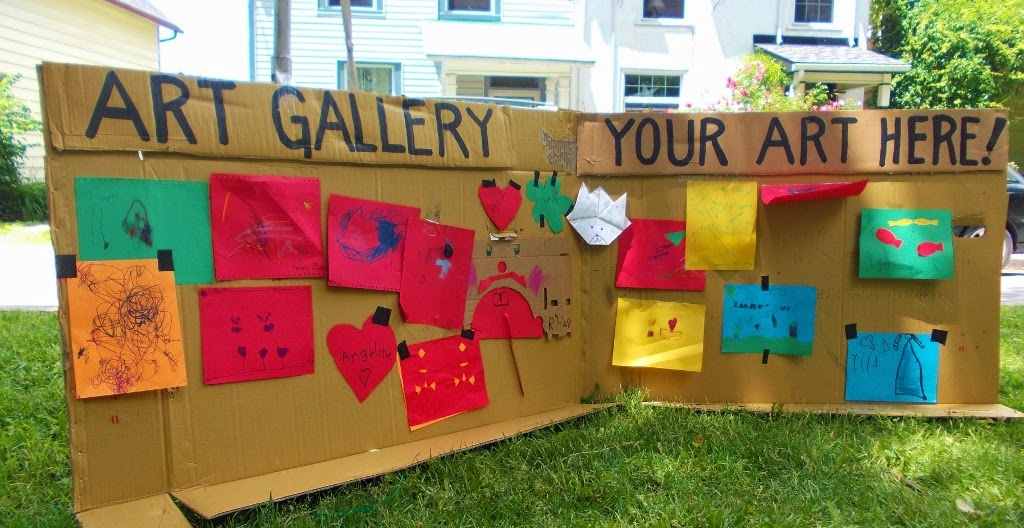 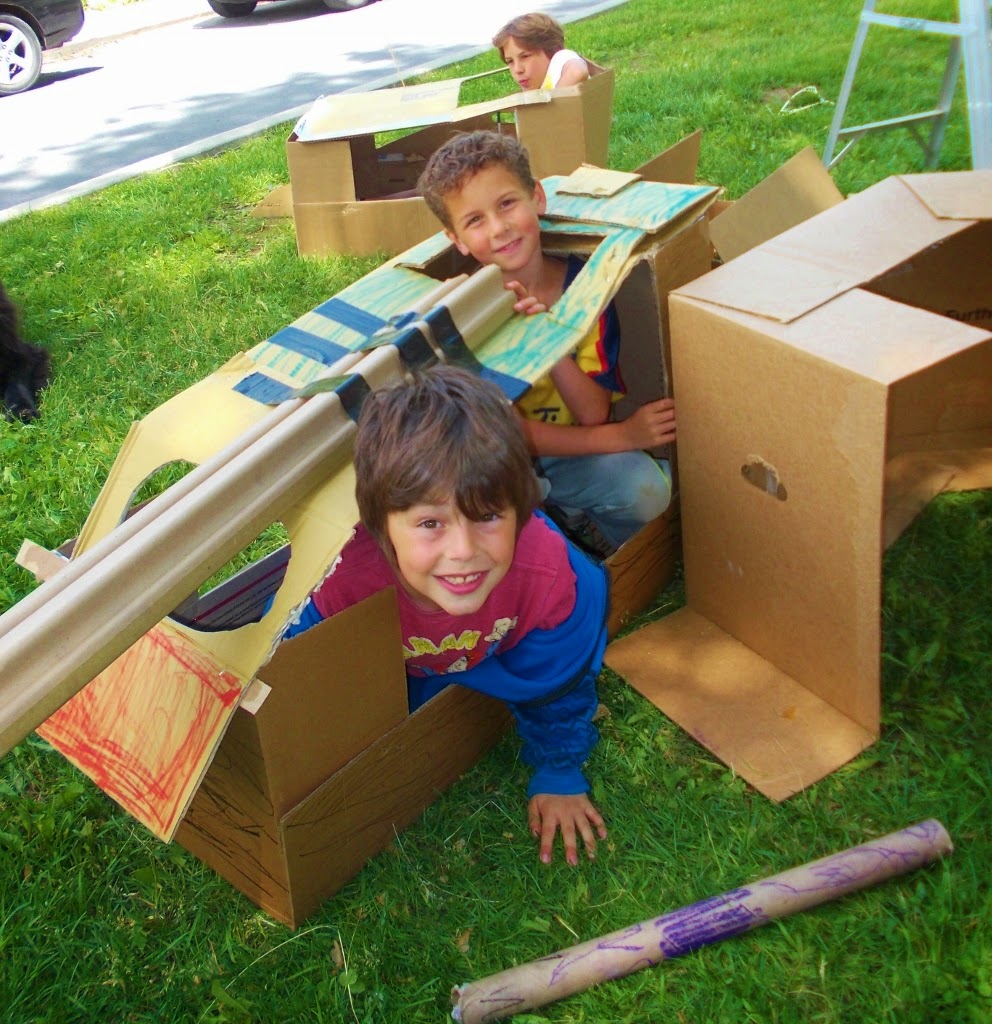 But the quote of the day goes to some anonymous little boy who asked Milé in all sincerity, "Do you know where the Queen of Cardboardia is?"

Speaking of Milé, he was doing some entertaining of his own as a "short order cook" on stilts. 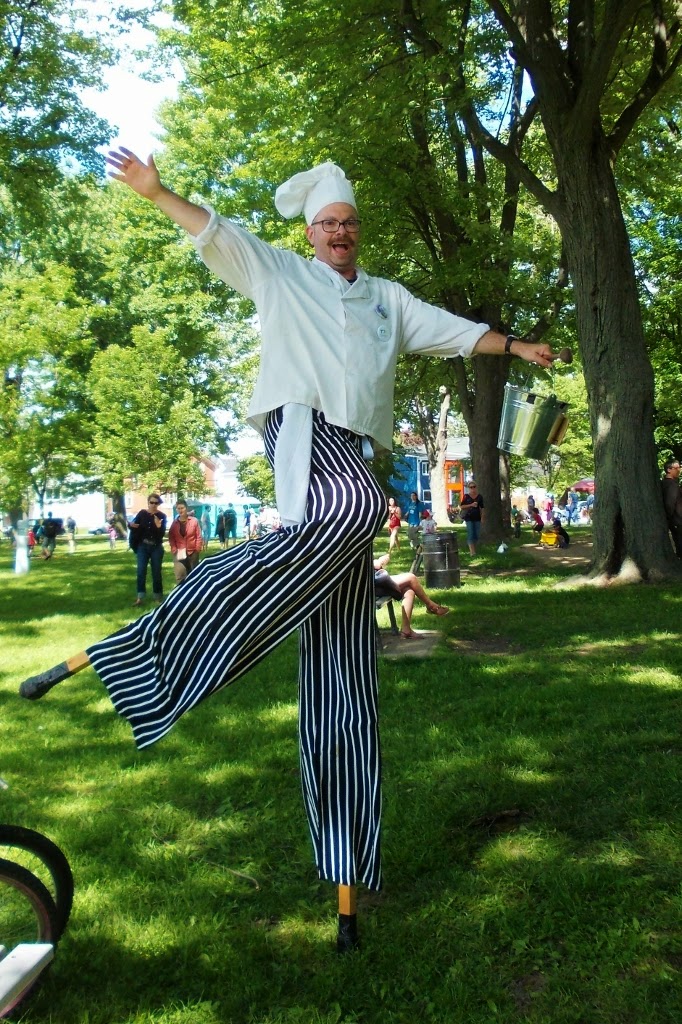 I was really touched that Cardboardia was immortalized on this year's festival merch (illustration by Kevin Merritt).

Now for the challenge of re-training my brain to stop ogling piles of recycling... it's hard to resist a good pile of cardboard when all you see are the possibilities!

Posted by Krista Dalby at 8:41 AM No comments:

Last week we hosted one of our largest events to date, Creative Rural Minds, with more than 120 people in attendance. It was a networking event for creative types and entrepreneurs designed to stimulate conversation and collaboration in Prince Edward County. Organized by myself and local filmmaker and council candidate Lenny Epstein, it was inspired by the Creative Minds events that took place from 2009 to 2010 as a product of our local Economic Development Office.


As the event got started we had live music by Cole Norton as the Picnic PEC food truck served up some good eats.

We paired up strangers at the name tag station, where they had to draw portraits of each other on their name tags - in 30 seconds or less!

Then we had some short presentations; first up Peter and Alice Mennacher related their experiences as creative pioneers in the County; their Blizzmax Gallery in South Bay is now in its 21st year, and the County has sure seen a lot of changes since they first opened their charming barn gallery all those years ago.

I made a short presentation about the Firelight Lantern Festival, and then Lenny announced the launch of the Prince Edward County chapter of the Awesome Foundation. The Awesome Foundation for the Arts and Sciences is an ever-growing, worldwide network of people devoted to forwarding the interest of… awesomeness! The idea started in 2009 in Boston, and now dozens of local chapters of the Foundation distribute $1,000 grants to projects and their creators. Awesome PEC is a group of ten locals (I'm one of them!) who will each contribute $100 towards a fund to make the County more awesome. Grants and can be used for any type of project that benefits the County and are awarded with no strings attached; projects should be able to be completely accomplished for the $1000 awarded. Deadline for the first round of applications is August 1, 2014, and we hope to award the grant quarterly. Think you’ve got an idea that will make the County more awesome? Apply online!

Following this exciting announcement the crowd mixed and mingled as DJ Ombudsman spun some sweet tunes.
This is just the first of the Creative Rural Minds events - we're planning more to come! If you'd like to join our mailing list contact me at krista(at)smallpondarts(dot)ca. We also welcome your comments and suggestions about future events.

Thank you so much to all the wonderful folks who helped make this happen. See you next time!

A few days ago, we welcomed our newest artist in residence, Dougal Thomson, from Scotland. Dougal is a filmmaker, and is spending the month with us working on a few short video projects. One of the projects he has in mind is a short film which requires a particular type of location, so he and I headed out early this morning to scope out a few spots in the County. I enjoy touring residents around and try to take our guests out on field trips whenever possible.

We hadn’t gone far when a white-tailed deer and fawn crossed the road right in front of us. Sorry, no pictures, but the baby was just adorable as we watched it squeeze through a fence that her mother had easily bounded over.

We made our way to Little Bluff Conservation Area. We parked the car and as we were walking down to the beach, we saw a few people looking down at something… it was a stinkpot turtle! 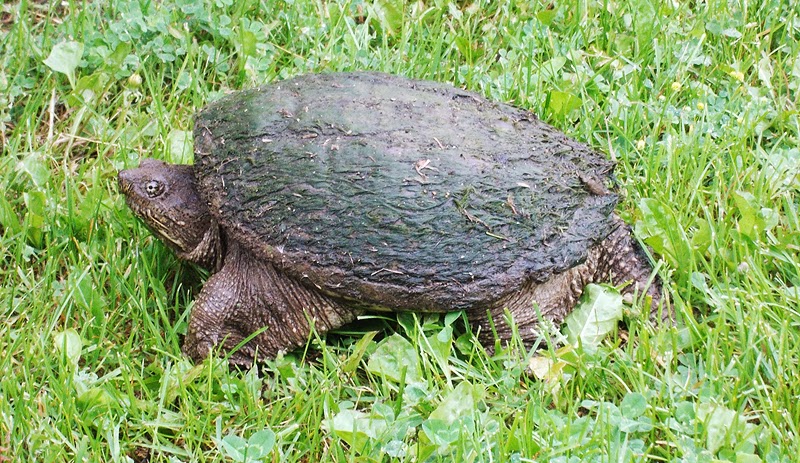 Dougal and I stopped for a few minutes to admire its mossy shell before it decided to scram and disappeared into the bushes. 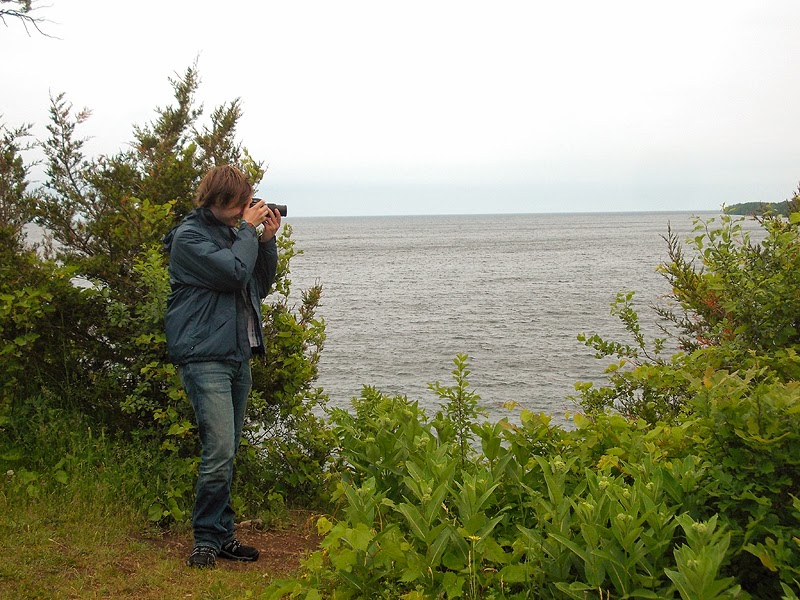 We wandered the beach for a while, but it was kind of rainy so after a few pictures, we headed back to the car.

It’s not often that I find myself in this part of the County, so I suggested to Dougal we keep on exploring, and so we drove to the end of the peninsula, Prince Edward Point. At the sign where it said ‘no cars’ we dutifully parked at the side of the road. It was a windy day and we watched the seagulls hanging in the air over the water. We rounded a corner where Dougal started taking pictures of the quaint old lighthouse. But the sight to be seen was actually right behind us: a massive bird of prey was hanging in the air between us, its wings fully spread, just metres away.

I got Dougal’s attention – as the bird was between us, we each slowly backed away in opposite directions. The bird landed on the road, nonchalant.

Dougal and I looked at each other… now what? 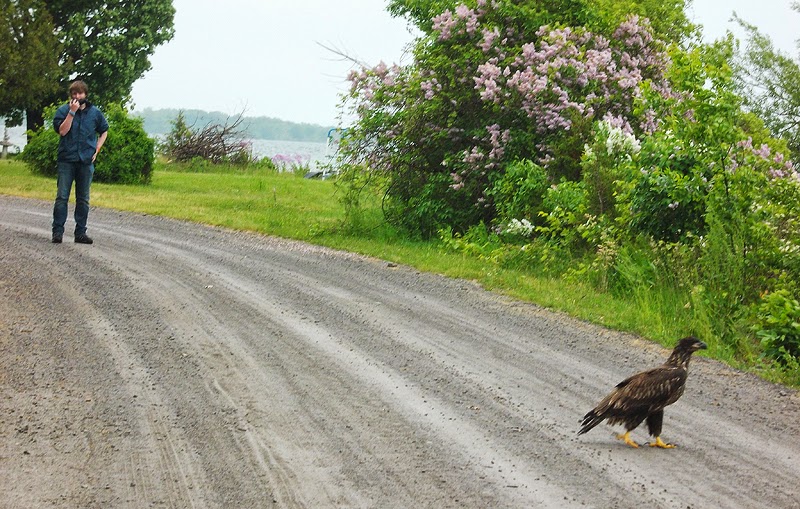 But of course, that wasn’t up to us. The bird rose into the air and came right at me! Its razor-sharp claws and terrifying beak were way, way too close for comfort. I screamed like a little girl and waved my bag over my head, successfully keeping it at bay. It looked something like this:

The bird momentarily pulled back, and Dougal and I ran like hell back to the van. We'd had enough close encounters of the bird kind.

When we got back to Small Pond, we looked up the species of bird: it was a golden eagle, an endangered species, and apparently not often seen in this area. What an honour to be attacked by such a rarity!


UPDATE (June 11, 2014): I just received a message from Elaine Secord. She writes: "My husband is a bird biologist who oversaw the southern Ontario Bald Eagle monitoring program until the species was no longer considered endangered. He tells me the bird in your photos is actually a juvenile Bald Eagle that would have hatched this year. (It takes 4-5 years for Bald Eagles to get their distinctive white heads and tails.) The really interesting thing about your bird is that eagles won't fledge in Ontario for more than a month still, meaning your bird must have arrived recently from the southern US. This is apparently a phenomenon that scientists know about. But still, very cool!" 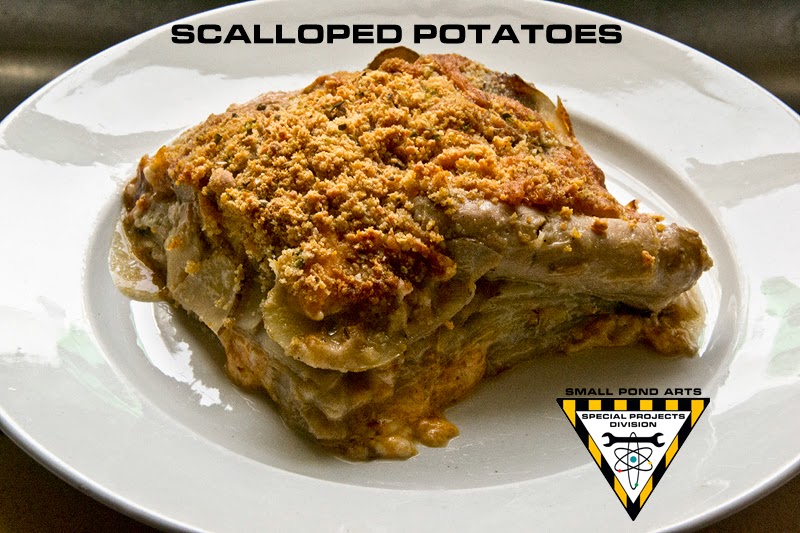 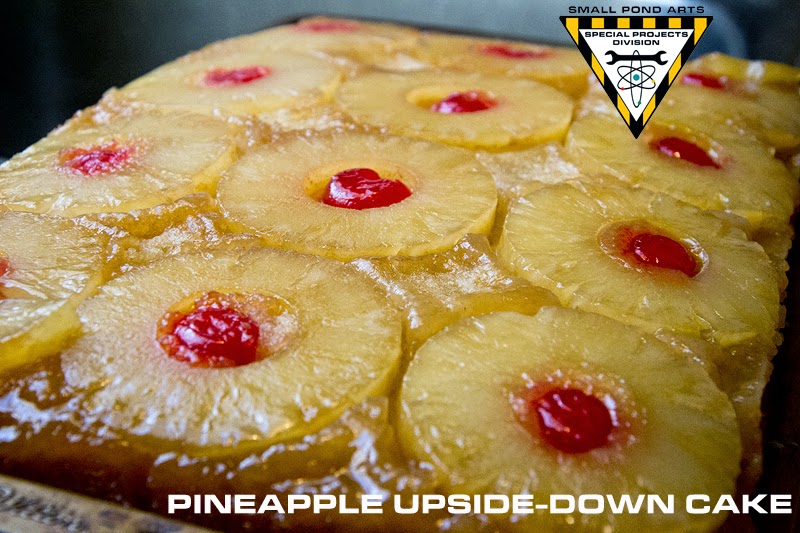 My main goal of these food-based Special Projects is to learn how to bake –initially focusing on some of my favourite foods from my childhood– and, having now covered most of them, it was time to start learning some of Krista's faves. I'd made scalloped potatoes before, so most of my learning this time around was still cake-based. 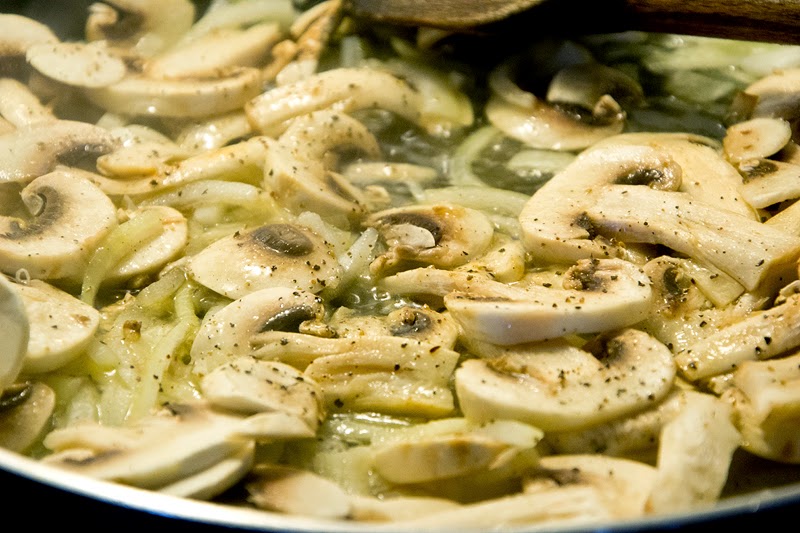 The potato recipe I used last time was fairly basic (potatoes, cheese, seasonings, and a cream sauce), but something like this seems naked without onions...and mushrooms go very well with onions, especially when they cook down together over low heat. 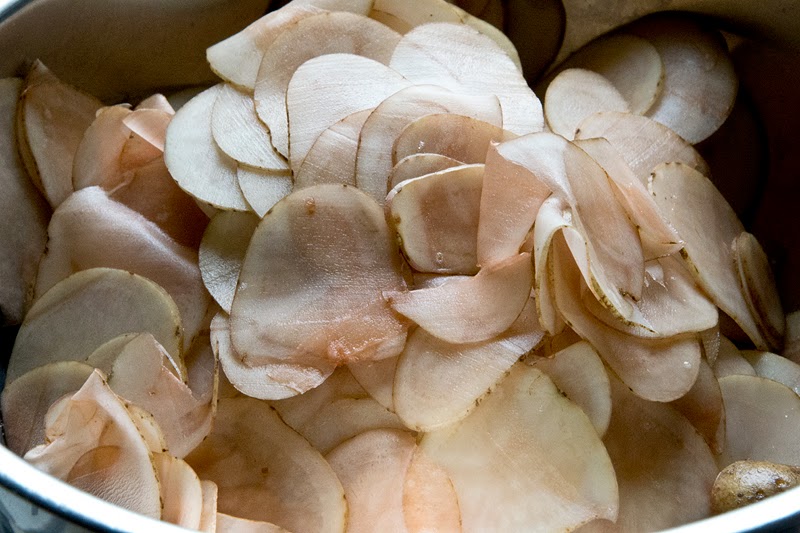 Back in the 90s I worked at The Shopping Channel and actually bought a few items that I still use today, including a mandoline. Every time I use this thing, I'm impressed with how fast, efficient, and easy it is. 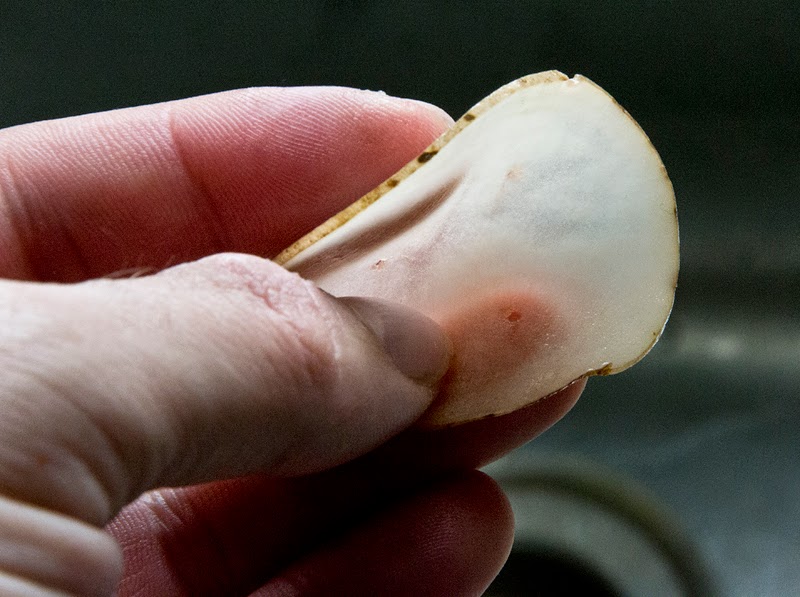 Look how thin this is! I sliced up about seven or eight potatoes faster and thinner than I ever could with a knife. 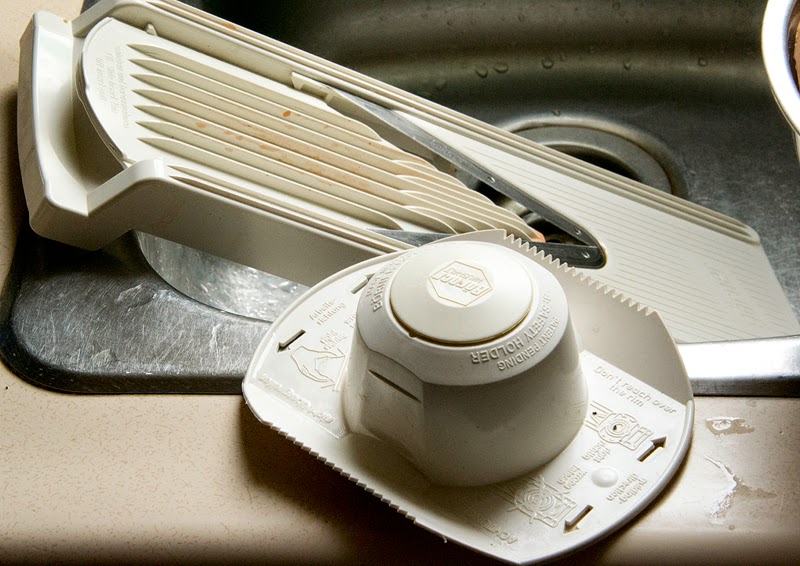 Make sure to use that safety cowboy hat thing or you might hurt yourself. I know from experience (and three stitches). Please note: that's not blood, that's oxidized potato juice. 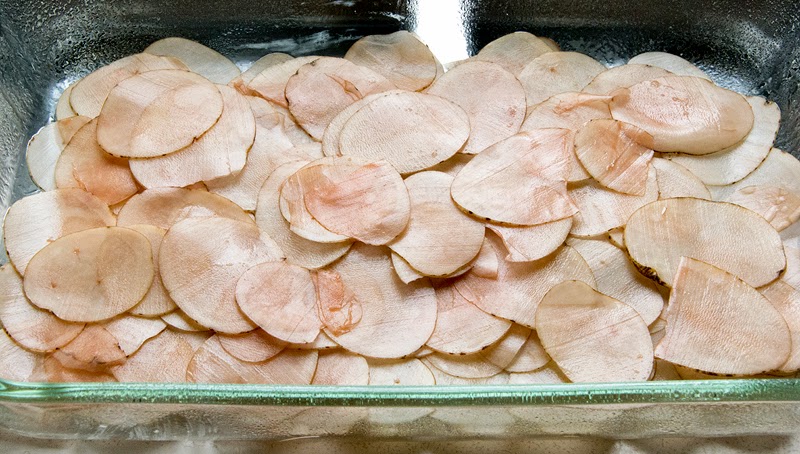 First base, part one.

While the onions and mushrooms continued to cook down, I started the assembly. 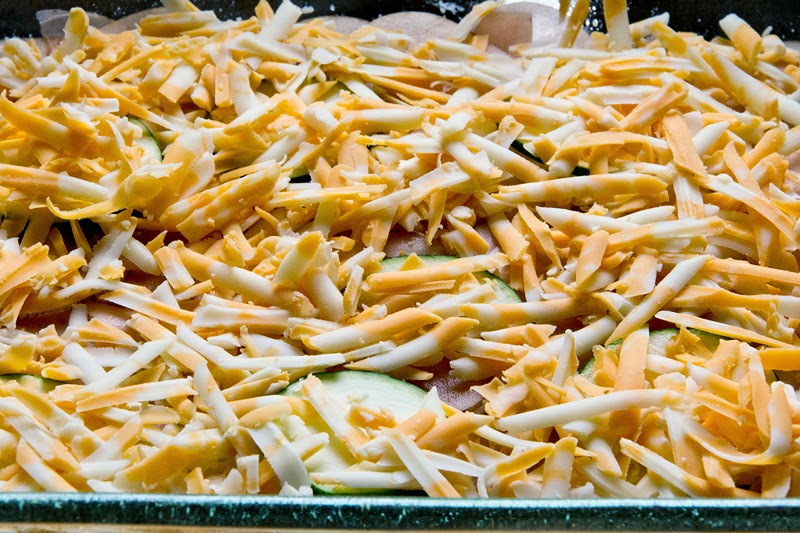 We had a little bit of zucchini in the fridge, so I added what was left before adding the first cheese layer. 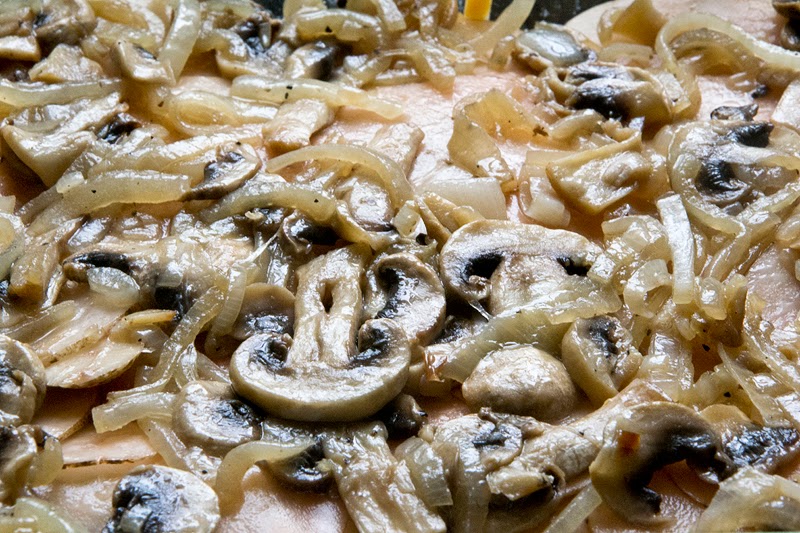 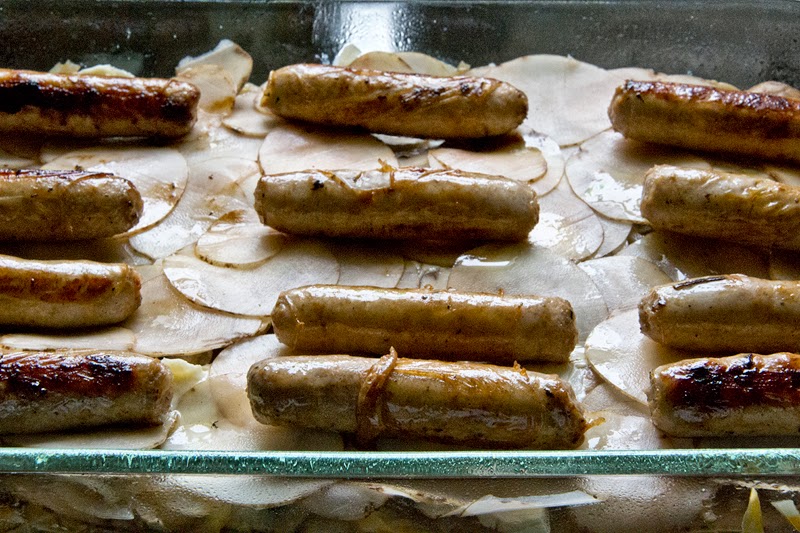 Here's the addition that Krista's mom made to customize this dish: breakfast sausages. I browned them after the onions were done, but probably should have put them on a lower layer for easier stacking. Maybe next time. 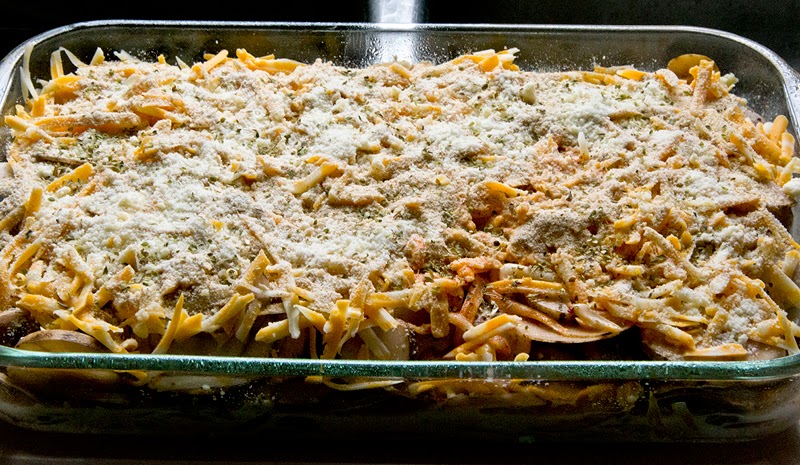 Ready to bake, part one.

One last layer of cheddar on top, sprinkled with some parmesan, bread crumbs, and oregano, and it was ready for the oven. 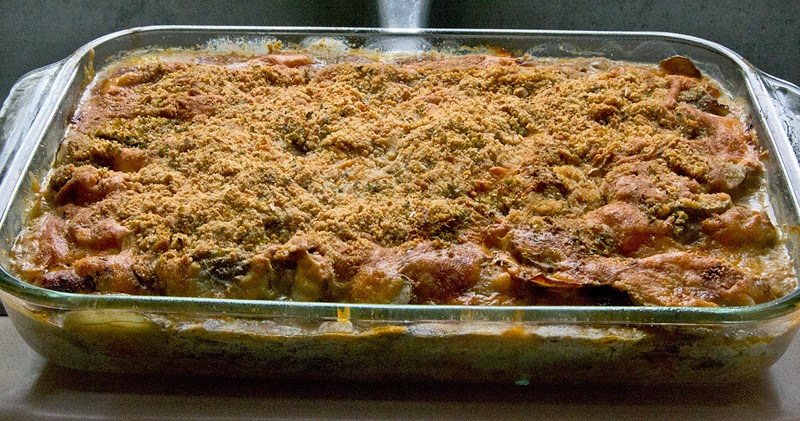 Just over an hour at 350° later, it was ready, but there was no time to sit around, I had a cake to bake! As soon as the potatoes went in the oven, I started the cake process... 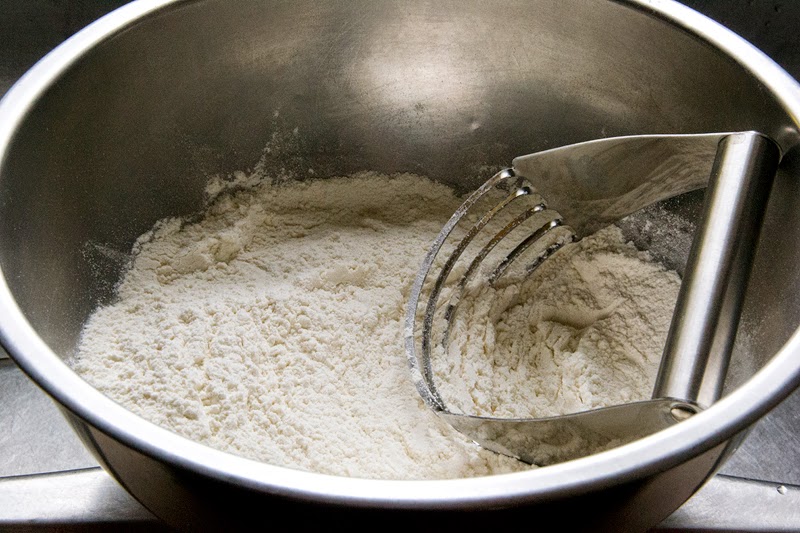 Return of The Specialist.

Until the day my hands give out and I can't sufficiently mix my cake ingredients with that tool, I'll have no need for a mechanical mixer. 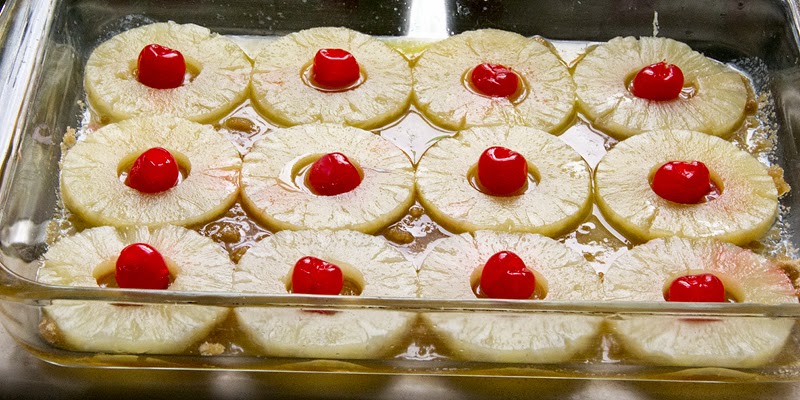 Slices of pineapple decorated with maraschino cherries atop melted butter and brown sugar is one of the easiest and most retro-looking bakery-based things I've ever done. 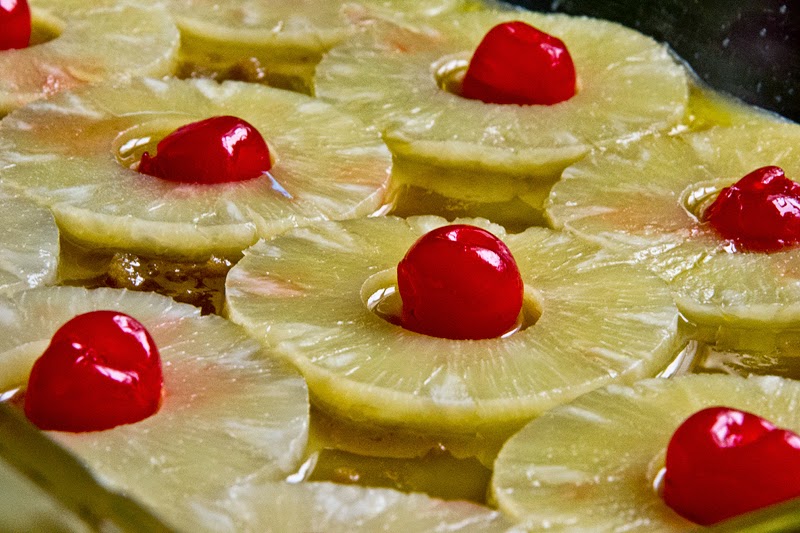 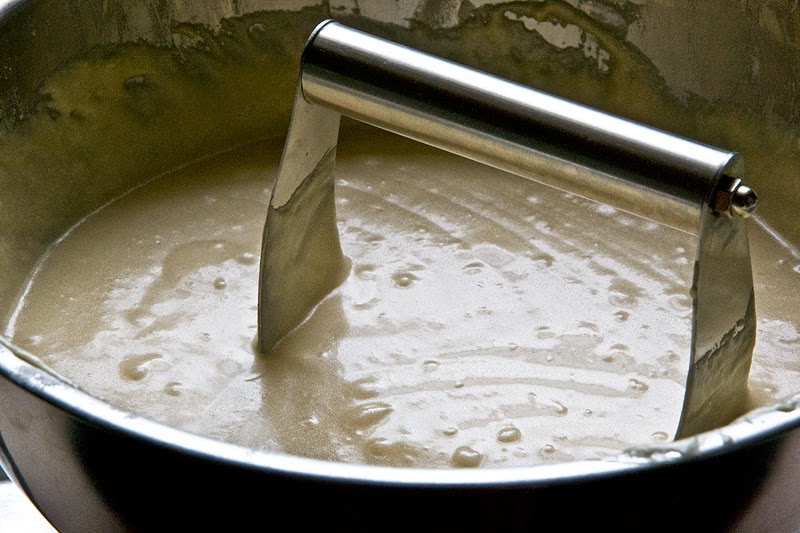 I suppose I could whisk most of the stuff I use The Specialist for, but I like it too much and it gets the job done. 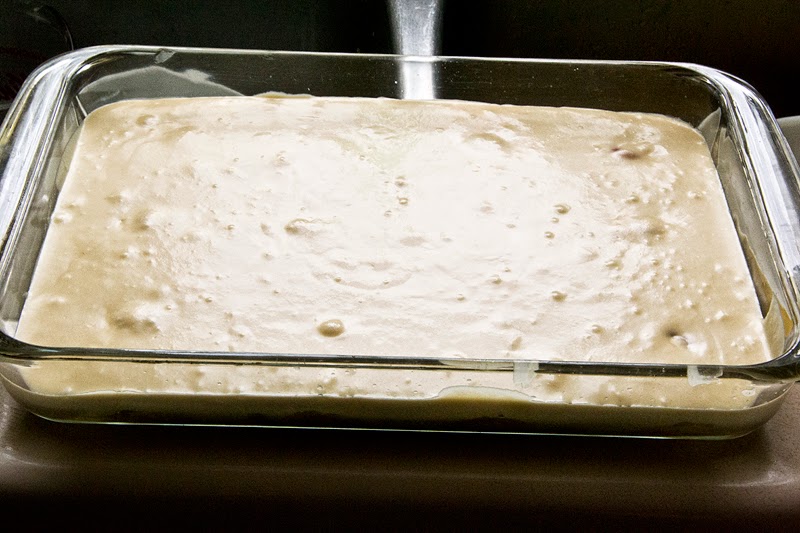 Coincidentally, the cake also needed to bake at 350°, and it timed out perfectly after the prep and dish washing; the cake went in as the potatoes came out. 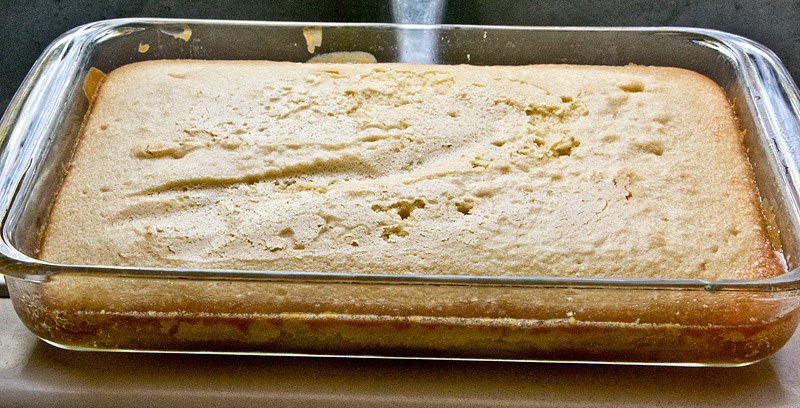 As though baking itself wasn't challenging enough for me, there was a curveball here I had to successfully hit: flip the cake so that the pineapple is on top (something I might have seriously messed up when I was first experimenting with baking as an adolescent and failing horribly at it, which steered me away from the practice for decades). 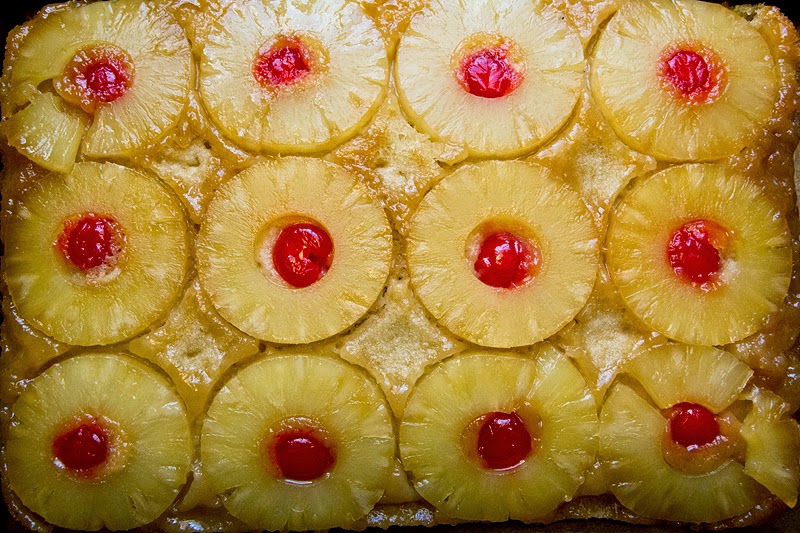 The flipping worked! We don't yet have an appropriate serving plate for a cake this big, so I just used a cookie sheet to flip and serve. I don't think I'd ever had this before, so it was hard for me to judge its success –other than it was quite tasty– but Krista was happy (with both dishes), so that was good enough for me.

The recipe I used for the cake is from Sally's Baking Addiction. I might try others just for variety down the road.