This past weekend we kicked off our sixth season at Small Pond Arts with our annual banner-raising party. This year’s banner, Wind & Water, was a collaboration between me and Leanne Shea Rhem, the greatly talented textile artist who created last year’s banner of the pileated woodpecker.

A few weeks ago, Leanne launched the pop-up studio for her company, Gold & Ginger, at The House of Falconer in downtown Picton.

Built in 1858, this architectural gem was recently purchased by Alex Fida and will be getting a complete renovation in the years to come. But for now, it is a fascinating trip back in time, peeling wallpaper and all.

It is in this inspiring environment that Leanne and I assembled this year’s banner. We started by laying it out on the floor... 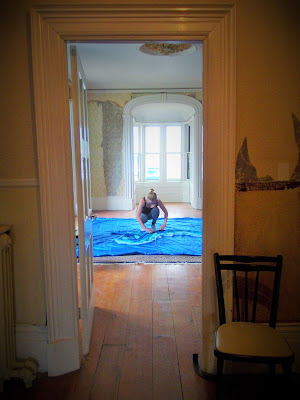 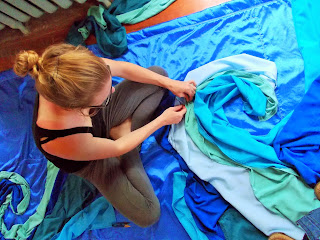 And Leanne sewed it all together. Prince Edward County is surrounded by water and is rather windy place, and we wanted the banner to have some movement to it to play with the elements. I think it turned out beautifully! 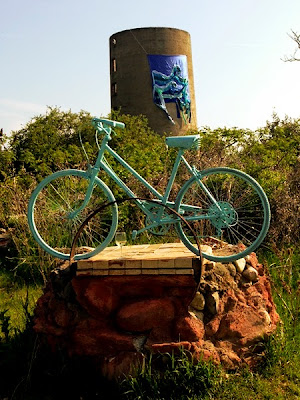 In a somewhat bizarre coincidence, I bought this old bike at a contents sale at House of Falconer last May, simply because I liked the look of it. I spray painted it blue and mounted it as an art installation. The bike belonged to Thera Falconer, a former resident and the namesake of House of Falconer.

Following the banner-raising we had a creative potluck; we asked our guests to bring food that incorporated the "six" theme. They did not disappoint!

Thanks to everyone who came out to the celebration and helped us raise the banner, and special thanks to Leanne for her wonderful work and use of her studio.

Stop by Small Pond this season to check out the banner - especially dramatic if it's a windy day - and if you're in Picton make sure to pop into The House of Falconer at 1 Walton Street and visit Leanne's studio. 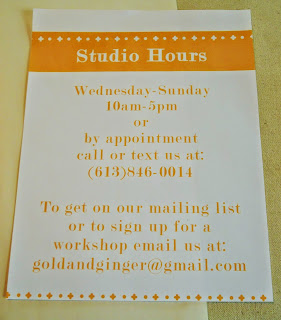 UPDATE: Check out the video to see how this beauty moves... 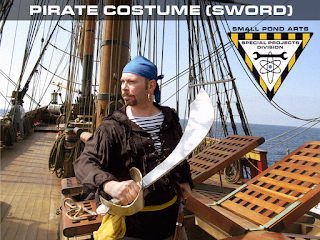 It all started when Krista suggested I wear my black puffy shirt (now known as my pirate blouse) for my next stilting gig at a Skeleton Park Arts Festival-related event. Okay, but what's the costume? Within seconds were were mentally compiling a list of items we already had that could make up a pirate costume: lace-up shirt, striped tank top, head scarf, earring, waist sash, replica musket, red stilting pants that could be cinched up to reveal the bottom two-thirds of one stilt as a "peg leg."

But what I really needed was a sword.

I didn't even once consider buying a toy; I knew this would be a scratch-build assignment for Small Pond's Special Project Division. 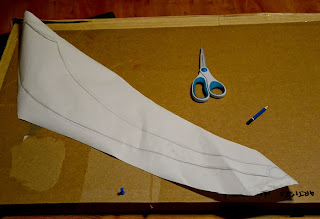 My first step was to draw out the blade to make sure the sizing was good. That drawing on paper then became my template for one half of the blade. 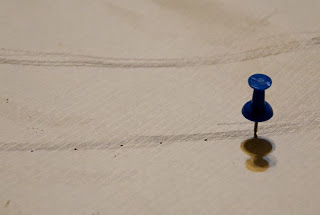 Using a push-pin, I poked holes, tracing the drawing. There are other ways to transfer the drawing onto cardboard, but I felt this was the best way, if not the fastest. 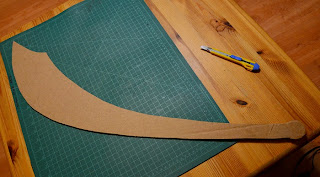 The pin method worked perfectly and my blade was able to go from dot to dot easily. 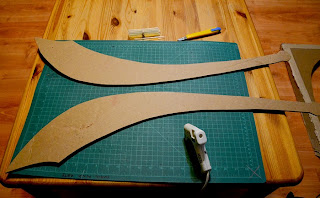 I used the first cut-out to trace the other side of the blade (the "grain" (or ribbing) of one half going the opposite direction from the other...for strength). 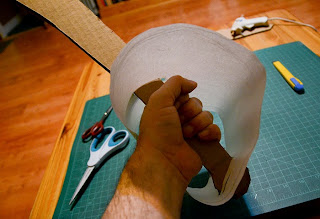 I did a mock-up of the hand guard with paper to get the sizing and placement of the slots right. 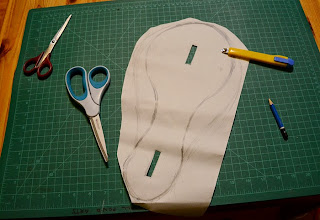 After refining the drawing I simply placed the paper onto the cardboard, traced the slots, then used the push-pin method to give me a dotted line to cut along. 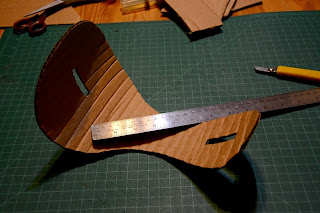 The grain of the cardboard didn't match up to the direction I wanted it to bend, so I used a metal ruler to make hard, evenly-spaced creases. 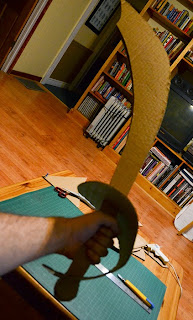 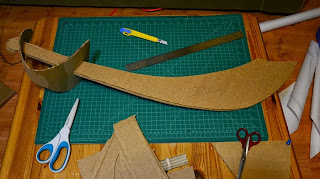 I hot glued the two halves of the blade together after making sure everything fit together nicely and looked good. So far, everything is going as planned. 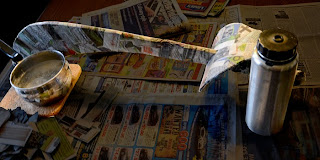 The next day I mixed up some flour and water in a pot over heat to make my paste and got to work with the papier-maché phase.
(image severely photoshopped for clarity) 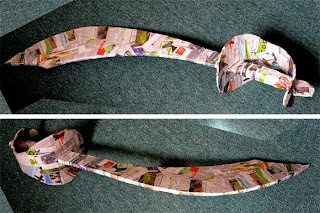 It took about a day to fully dry, but I had time and din't want or need to rush anything.

The first coat of paint I applied was a gloss black. I thought this would help with the sheen of the metallic paints I would add later, but I'm not sure it had any real effect. Next time I'll use a dark primer instead of gloss. 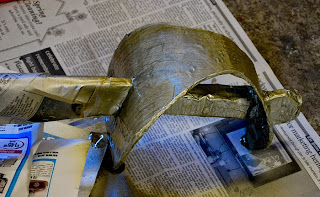 I painted the blade first then, when it was dry, I masked it off and painted the hand guard and hilt. I was going to paint the hilt brown, but time was running out and the gold was fine –especially since I'd be holding it, covering it up.

When it was done, Krista and I took some photos of the costume while we worked out any problems that needed adjustment or correction. 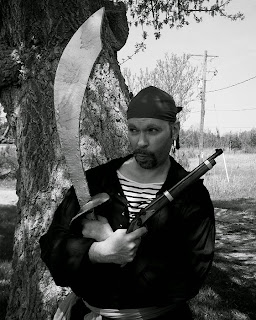 
You can clearly see the streaks the silver paint made while drying, but it's not too horrific. I may repaint the blade and paint the hilt brown for my next gig later this summer. 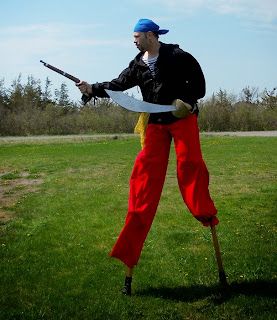 Ignoring the mirroring of many features (and the lack of a lidded stein), the final costume is quite close to my initial doodle: 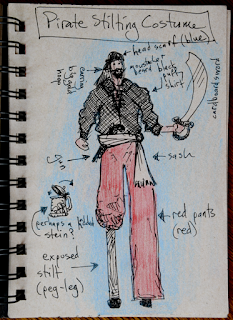 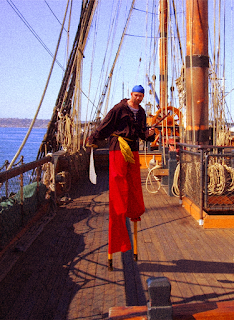 It's like an outtake from a horribly over-saturated print of a 1970s Sinbad movie.