A Throne Fit for an Artist

Milé and I looked at dozens of places to locate Small Pond Arts – both in and out of Prince Edward County - before we finally found our home on Clarke Road. We had a number of criteria that needed to be met. We wanted an old house with character, and we needed to have a number of bedrooms to house our guests. Now that our bedroom renovation is finally done, we have 5 bedrooms (check!). We wanted space for a gallery (check!), outbuildings (check!) and a good piece of land (we went a little overboard with 87 acres, but what can I say, we fell in love with the place). We also wanted to have at least two bathrooms… uh, not so check. Our house only has one. We looked into getting another bathroom put in, but the cost was utterly prohibitive, at least for right now.  So, we decided to build an outhouse. And not just any outhouse – but the coolest outhouse in the County, so that our visitors would actually want to use it! 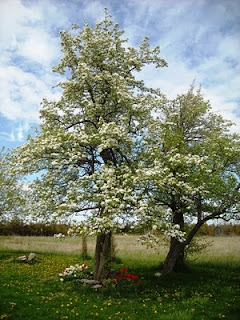 A few years ago, I spent five weeks as an intern at Bread & Puppet Theater. Located on a farm outside Glover, Vermont, it was an utterly transformational experience for me. Aside from the incredible artistic shenanigans that were constantly underway, Bread & Puppet also has some of the nicest outhouses I’d ever seen. They are a far cry from the dark and scary outhouses I remember from childhood Brownie camps. Those outhouses induced such fear in me that I would actually try to ‘hold it’ all weekend – talk about discomfort! But Bread & Puppet’s outhouses are bright, clean, and beautifully decorated with handmade art, and showed me how great an outhouse could actually be. 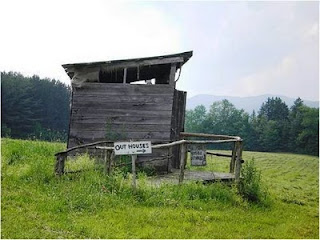 Wheelchair-accessible outhouse at Bread & Puppet Theater
Neither Milé nor I are builders, per se, so we called in the experts. Our friend Guy was moving out to the farm for the summer, and his dad Gary was driving him. I knew both of them were handy fellows, so I asked them if they could help us out by building an outhouse. They agreed, and father and son set about building us a snazzy two-seater with an aluminum roof. They built the whole thing over the course of two afternoons, and the only blueprints were the ones in Gary’s head. 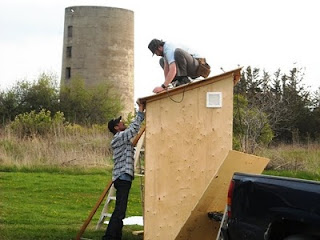 Gary on the left; Guy on the roof; Silo supervising in the background
They constructed the outhouse in front of the garage where they’d have access to power, and succeeded in turning a lot of heads from drivers-by wondering why on earth we’d put an outhouse there? When the privy was ready to move to the site, we hoisted it up on to two logs, and started the process of slowly rolling it into place, a good 200+ metres away. Moving the outhouse was a pretty cool experience, and gave us all a renewed respect for ancient civilizations that regularly employed such techniques. 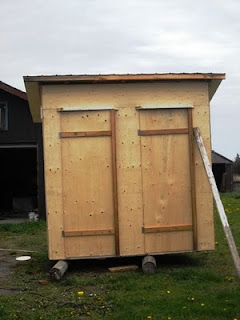 This technique ideally uses 3 logs - but we only had 2.  From this postion you roll the whole thing in the direction you want to go until the back log is no longer under the outhouse. You tip the outhouse forward, pick up the back log, move it to the front, tip the outhouse back, slide the log underneath, and repeat.
With the outhouse now in the vicinity of the final location, it was time to paint it, and start digging the pit. Thankfully my sister Caitlin arrived at the farm about this time, so we had an extra set of hands to help. Digging the pit was not easy. Guy did the bulk of the work, and Caitlin and I leant a hand. After an initial foot of topsoil, there was some clay, which we hauled away in buckets for future use in sculpting giant puppets. After the clay was rock, rock, and more rock… a job that required far more than casual shoveling, but rather smashing through solid rock and pulling out the pieces by hand. 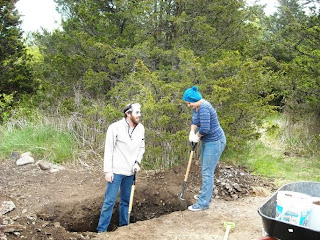 Guy and Caitlin dig a grave - er - outhouse pit
Ontario building code does not require a building permit for outhouses, but there are guidelines about how they should be built and where they should be located. Due to the nature of our rocky terrain, our pit isn’t terribly deep. When it fills up – probably in a year or two - we can either get it pumped out, or just fill in the pit with earth, and roll the outhouse to another nearby location.
The last step was adding the finishing touches: door latches, heart-shaped windows, ventilation pipes, and interesting posters and artwork so you have something to look at while you’re in there. 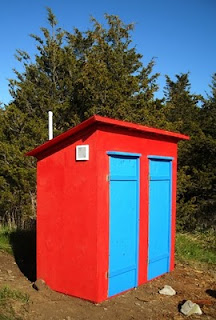 Who will be the first to christen our new privy? That’s anybody’s guess. But I’m sure it will be put to good use this coming weekend, as we host our grand opening party, a.k.a. The Big Splash, on Sunday May 23. Why don’t you join us, and you too can experience the joys of a well-made outhouse!
Posted by Krista Dalby at 12:14 PM