“My fake plants died because I did not pretend to water them.”
– Mitch Hedberg

As I’ve mentioned before, we depend on our well for our in-house water so, to help conserve this precious ground resource as much as possible, we've been collecting rainwater in barrels to use on the gardens and the flowers outdoors. But last summer at Small Pond was a really dry one: by August our rain barrels were no longer full of sky water, and by September we started getting concerned about how long our well would hold out. Luckily, the well didn’t run dry, but, clearly, we needed to supplement. 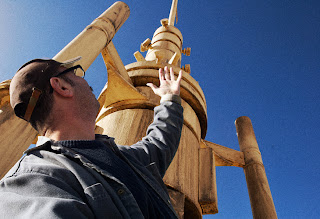 
We asked around and it looked more and more like we should consider getting moisture vaporators, which are usually found in arid climates but work just fine (better, even) in climates like ours, which can get pretty humid in the summer. We eventually found six used GX-8 models on Kijiji that were just in our price range and, as our tests of the units proved, in perfect working condition. Aside from a little rust and some carbon scoring, they were as good as new. 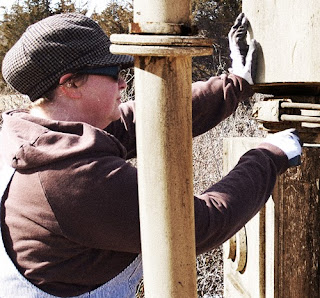 Krista scrapes away at some carbon scoring. 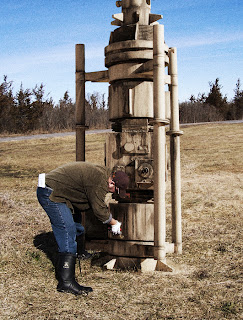 I make some minor adjustments.


As far as the weather was concerned, March may not have been the best time to install these beasts (the ground was actually quite workable, albeit cold and muddy), but considering how busy we’ll be in April and May –not to mention this summer!—this was the best time for us, as far as our schedules were concerned. It only took us one day per unit to install, anyway. We decided to put them all in the Pasture to make it easier to gather the water and also to keep an eye on them when the strong winds blow in case the heavy, in-ground bases should fail. 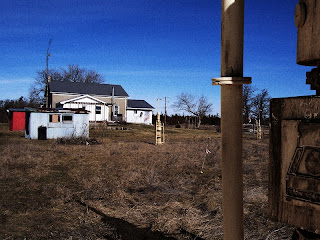 The first three are up and running!


The GX-8s are very quiet and pretty self-sufficient, using solar panels to power the condensers in the outer bars. They’re like giant de-humidifiers.  The water that collects there is then filtered and funneled into a 60L holding tank near the bottom of the unit. That doesn’t sound like a lot of water compared to our rain barrels, but these things pull moisture right out of the air and can reach capacity in less than 24 hours, so we’ll have (at least!) 360L of cool, clean water every day –even if it doesn’t rain for weeks.

All six vaporators installed and
quietly humming in the Pasture.
Now all we need is a droid who can speak the binary language of moisture vaporators…