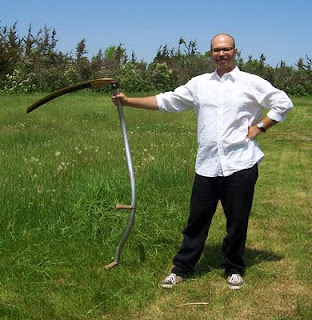 I've come about the reaping.
Actually.

I wanted to get a scythe last year to cut down select areas of tall grass and plants around Small Pond, but never got around to it, leaving the hard work to the gas mower and nearly crippling it.

We already had an aluminum staff which was left in our garage by either the previous owners, or the ones before them (who knows?), and it was in pretty good shape, except for the broken, rusty blade and the nearly rust-sealed mount. 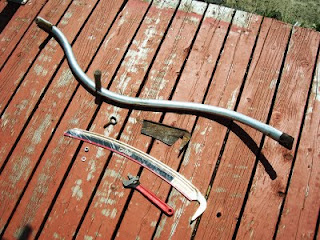 Above is the aluminum staff with its two wooden handles (on the far left and middle); the ring mount where the dangly bit of the blade goes (it attaches to the far right end of the staff); the old, broken blade; the new 28" Garant blade made in Austria (still in its wrapping, including the red plastic safety guard); the new washer and nut; and the big wrench needed to put it all together.

Last year --for some stupid reason-- I wanted a wooden staff which wasn't so curvy because I felt that would be "more traditional," but soon realized that one made of aluminum would last longer, be stronger and lighter, and this extra-curvy shape was probably more ergonomic. 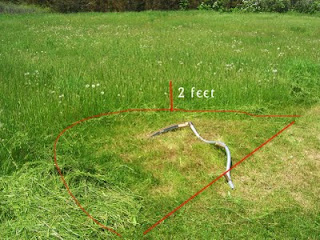 This is a test.

Of course, as soon as I put it together I had to test it. In the photo above, the curved line delineates the test area, cutting through grass that was two feet tall. The straight line is on the border between the tall grass and grass cut by the gas mower a few days before. On the bottom left, you can see the cut grass (which has to be raked, it's so long).

Using a scythe will reduce the wear and tear on our gas and reel mowers --but neither of them would be as effective on the tall stuff, anyway.
It's also a pretty good workout.

Swinging the scythe came fairly naturally to me (perhaps a genetically inherited trait from my farming ancestors), and it's not like a golf swing (not that I golf). There is the possibility of injury, so standing like I am in the last frame enables the blade to swing freely from right to left (it's a right-handed staff, by the way), and you need to make sure the blade swings away from you, following the line of your stance (again, see the last frame). If you don't swing in a diagonal to your hips, you could possibly swing into your left foot (and you'll need that foot for other things).

And now I'm off to cut some paths and clear space for parking...

Photographs of me by Catherine Mellinger.

UPDATE, 01 June 2011: After using the scythe to great effect today for a couple of hours, I've decided to officially name it Figaro, after the barber of Seville.