A banner, a band, and a birthday

Today is my 40th birthday. A few days ago we had a party to celebrate. It was one of the best parties at Small Pond to date – and that is saying a lot.

The bash was a day-long affair. First off we raised our new banner on the silo. 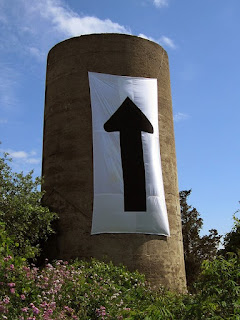 “What does it mean?” people asked.

The banner-raising went smoothly. A few days earlier Milé went out to Canadian Tire and bought himself a bow and arrow. He’d never shot one before, but within the space of a few hours he learned how to use it and shot the ropes over the silo.
. 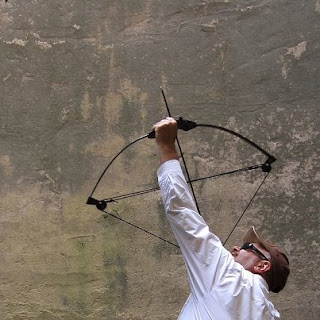 The morning of the party we attached the banner to the ropes.  At the appointed time, all that was left to do was hoist the banner up and tie it down both inside and outside the silo.

I’m pretty happy with how it turned out. I didn’t take a lot of progress shots while I was making it, but if you want to read about the creation of our first banner you can do so here.

My birthday gift to myself was hiring a band called Alberta Darling to play the party. 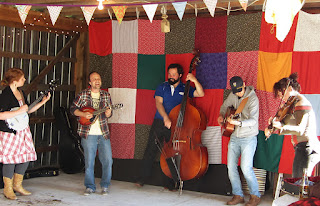 I’d seen them a few months earlier in Toronto and knew right away that their bluegrass stylings would fit in perfectly with the Small Pond vibe. I love it when I’m right.

That night there was a full moon. Groups of revelers split off for moonlit strolls to watch the fireflies blinking in the dark.

It was a magical day and night, and reminded me that the best thing about Small Pond Arts is when people are here to share it with us.

My deepest gratitude to everyone who made this birthday so special! I am one lucky girl.
Posted by Krista Dalby at 12:58 PM