Since the legendary video game company Atari filed for bankruptcy last year, with its future in the USA still uncertain, one of our most exciting plans for the launch of our Fifth Season at Small Pond Arts (starting at the end of May 2014) was cancelled mid-stride, our project unfortunately not falling within their intent to "conduct its normal business operations" during the bankruptcy proceedings.

In the summer of 2012 we had two freelance game developers stay with us as part of our artist residency program. Ron and Eric were here with us for just over a month to hammer out some bugs on a sports game they were working on, and they immediately became so taken with Small Pond that, unbeknownst to us, they started coming up with ideas for some video games inspired by life at the Pond. They secretly brainstormed, but about a week into their stay, they enthusiastically presented us with five games to launch Season Five (which seemed ages away at the time). We were speechless and amazed and excited, to say the least.

They felt the easiest to produce –and most fun– would be 8-bit style games harkening back to the glory days of the Atari 2600 console but which would be playable on mobile media like phones and iPads as well as desktop computers. 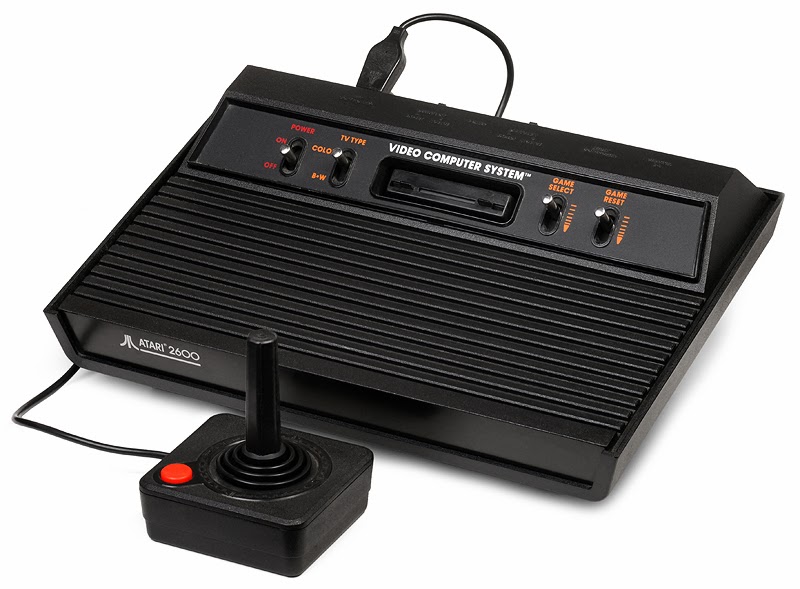 The cancellation of the games is heartbreaking, but the saddest part is, since Ron and Eric were in the midst of negotiating with the folks at Atari just before the bankruptcy happened, the rights are tied up with the rest of Atari's assets and none of us are able to continue working on these games or shop them around to other companies until the whole mess is cleared up who knows when. On top of that, as part of the deal, we almost had limited edition cartridges for actual use in the actual 2600 consoles! Imagine that! I'm not much of a gamer these days, but for a few years in the 80s I played the hell outta my 2600 (I still have it! And it works!); this whole thing would have been a dream come true. 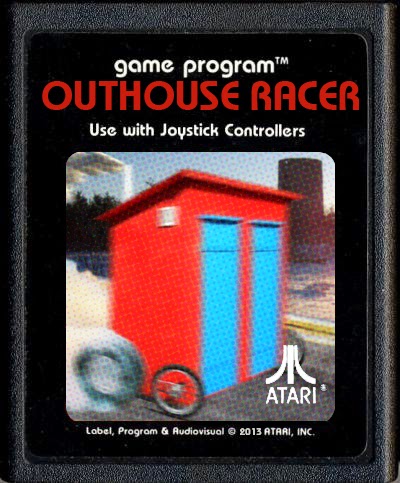 Inspired by our deluxe double outhouse, this game was a two-parter: first you had to race Player 2 (or the computer) to the outhouse through a series of mazes and obstacles, and then, after spending some time inside, the outhouse turned itself onto its side, split in half, and became two dragsters, ready for the second race which was a course dead straight down to the end of Clarke Road. 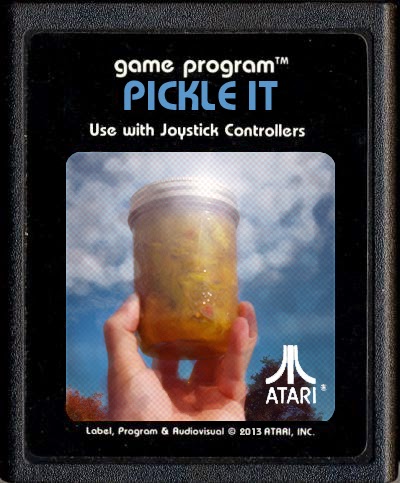 Inspired by my fondness for pickling some of what we grow in our garden, this one was the most complex –and potentially confusing– game. It started off as a treasure hunt, meandering all over Small Pond's 87 acres in search of items to help you make some preserves (jars, lids, fruits, vegetables, vinegar, pectin, etc.). The added challenge is that you could only carry so many items in your basket, so you had to have the right combination for whatever it was you were assigned to pickle. Once you had the correct combo of items, you were now in the kitchen, ready to pickle, and your new challenges were making sure the equipment was sterilized, cooking your veggies/fruits properly, and ensuring you had a good seal on the canning lids. 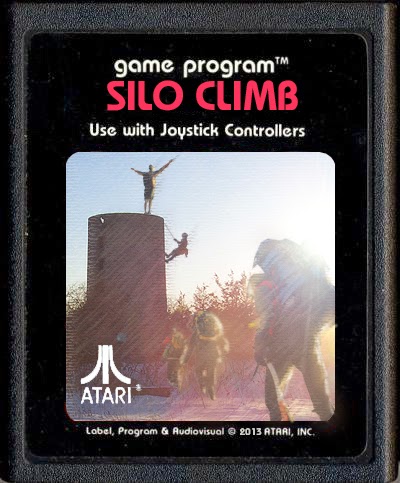 The most identifiable feature at Small Pond Arts is our Silo (hence the name of our blog), and every year, we dress it up in a huge banner, lest it go naked. Many visitors have suggested turning it into a climbing wall (but we feel that kind of liability would work better in the virtual world).

The goal for this game was to approach the silo, swing your line high and hook it to the top, and then start climbing up. Eric kept pushing to make things more challenging, so weather was introduced to hinder your approach, swing, and climb: when it was icy, you and your line would slip around a lot; when it was windy, you'd get blown around; when it rained, everything would be soaked and sluggish; when it was sunny, you'd have to race up and into the silo as fast as possible or you'd get sunburned (your character slowly turning from black to bright red as the sun gets higher in the sky).

Here's the main screen (the figure climbs up in a repeated animation cycle until you start the game): 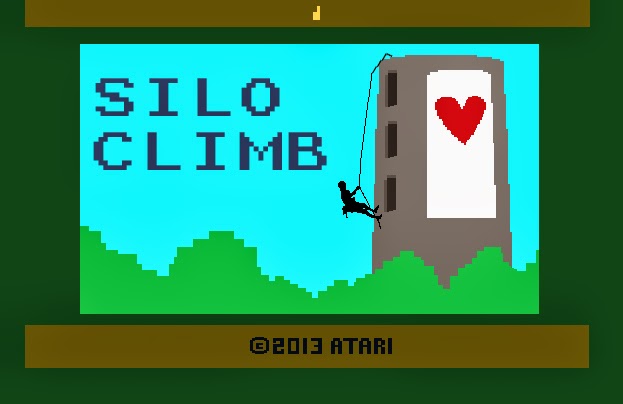 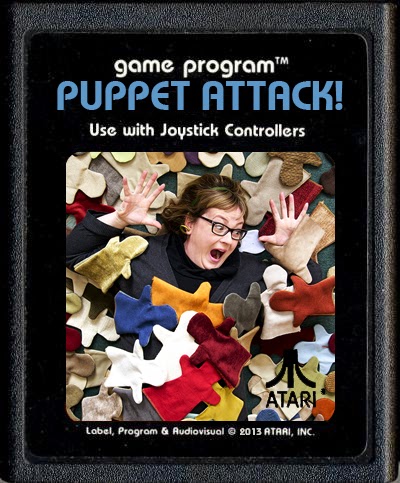 Inspired by Krista's menagerie of puppets, this one had a sort of Space Invaders / Galaga type of game play in which hordes of evil puppets (scary skeletons, scary clowns, scary bunnies, etc.) marched up from the bottom of the screen to get you. You could move around the screen freely and ward them off with a weapon of your choice: a gun (six shots only; you had wait some time to reload), a baseball bat...or a whip!

Here's the artwork for the instruction booklet: 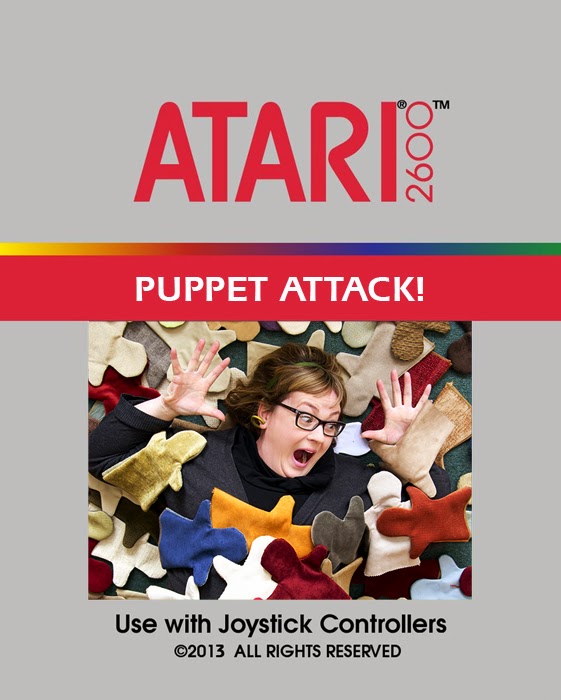 And here's a demo screen of the game in action: 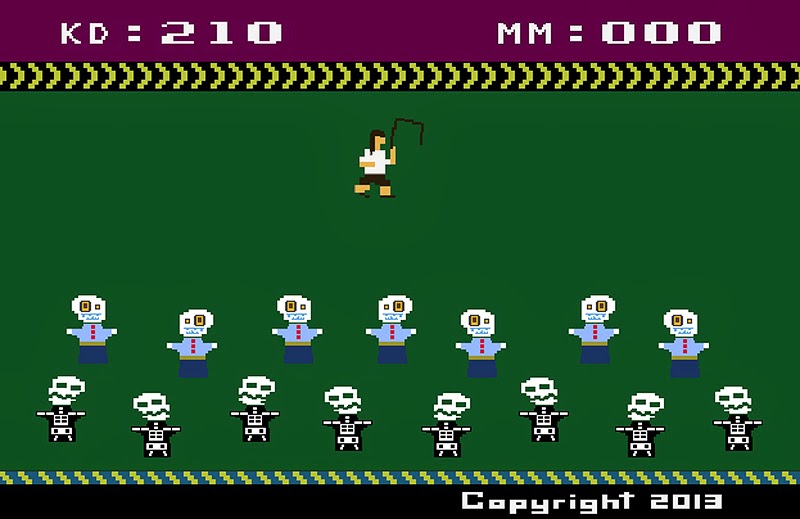 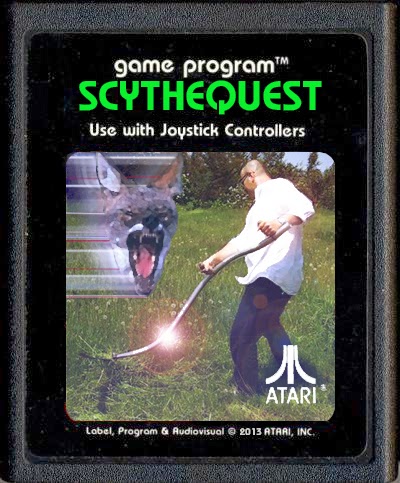 Like in real life, the challenge in this game was to cut down all the tall grass with a scythe during daylight hours –but watch out! Coyotes are stalking nearby...and they're hungry! Luckily, you can use the scythe as a weapon to protect yourself...but don't take too long with the beasties because the clock is ticking and that grass won't cut itself! 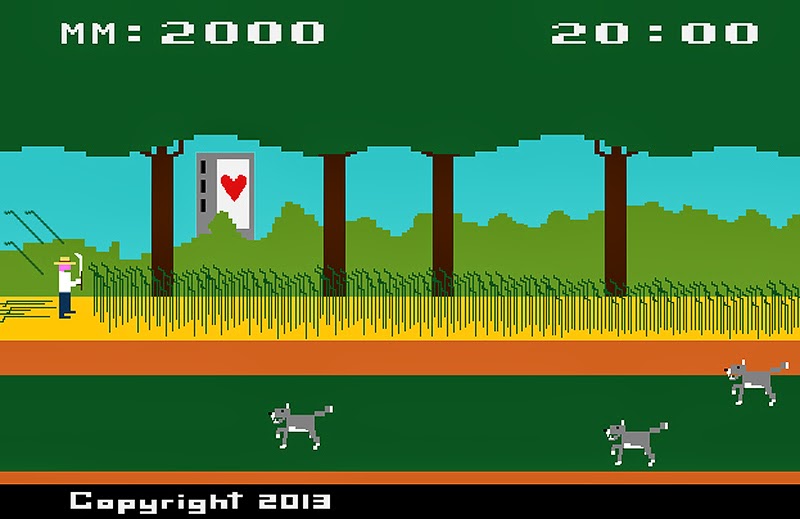 We'll let you know when Atari's legal issues are settled and we can all play a little virtual Small Pond. Until then, you'll just have to come and visit us for a real taste of Pond life!