We’re still basking in the glow of the second annual Cornography, which took place this past Sunday at Small Pond Arts. Cornography is an art festival on the theme of “our twisted relationship with food” which the audience discovers as they are led from location to location around our farm.

The afternoon started off with a Punch & Judy show, performed by yours truly, wherein the devilish Punch throws his baby out the window while the missus is at the farmer’s market. ("What, you haven't seen a bit of good old-fashioned violence before?")

Milé, dressed as a chef, then led the audience back to the barn, where they were greeted by Reverend Rick Zimmerman, who welcomed the audience to the Funeral for Bad Food:

“I want each of you to ask yourself this question: If I could say goodbye forever to one grocery bag beast, one dinner table tragedy, or, as the kids today would say, one food fail – what would it be? For today we shall topple the burger king… we shall banish the Brussels sprouts, or burritos or bonbons. Yes, friends, this is a funeral. It is time to Pills….bury….your bad food choice.”

He held aloft a coffin-shaped piece of cardboard.

“You will each get a coffin just like this….write down that item, that food failure, that corrupt culinary concept that you wish to cast out. A brisket, a basket, just write it on your casket. Let me put it to you as plainly as I can - place on your sarcophagus that which sticks in your esophagus!” 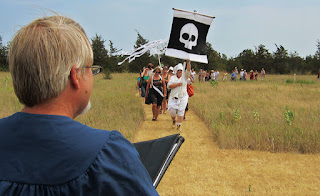 When everyone had written down their idea of Bad Food, we had a funeral procession through our back field. When we reached the grave site, the Reverend was awaiting us. He tapped each person with a wooden spoon, and each spoke the name of their Bad Food and flung it into the grave – to which we all shouted “Expired!”

Hands down, it was the best funeral I’ve ever been to. Of course every funeral worth it’s salt has a reception afterwards, so we noshed on fabulous skull and bone cookies made by RuthGangbar, which a bunch of us had decorated the night before. 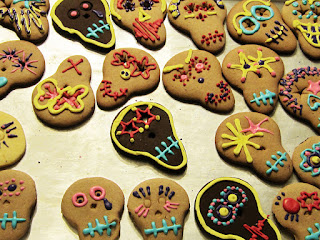 Next the inimitable Tamara Segal and Chris Byrne led the audience on a musical foraging walk, pointing out edible wild plants growing all around us which are not only nutritious, but tasty, too! 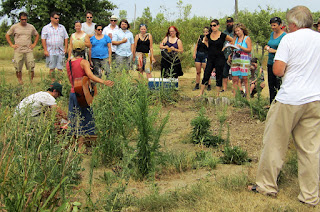 Meanwhile some folks were in the barn, making a variety of potato people with our queen of craft, Cynthia Dinsdale. We also had food-themed art hanging in the barn, including work by Erin Johnston, Sarah Renaud Wilkinson, Brandy Gale, and of course, Milé Murtanovski. 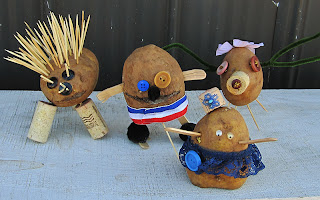 Next the audience was led to the silo, where Christine Renaud performed some spoken word. She got the audience involved using the human microphone technique, and then got a bunch of volunteers to get into the silo to perform one of her poems, creating a human ‘silophone.’ 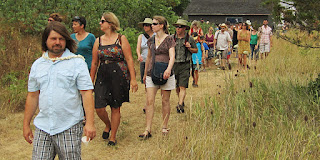 Children’s entertainer extraordinaire Andrew Queen was up next, performing some great foodie folk songs from his album ‘Grow.’ 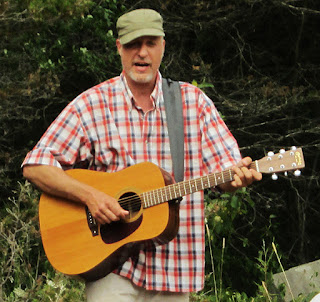 Finally, the audience gathered around our new cob bake oven, where Jennifer Morales, a Small Pond resident artist from Milwaukee, read her poem Brought to Light. The poem speaks of fire: “Our kind want to burn…”

Yes, we do. The day was coming to a fiery close; the oven had been lit two hours earlier, and I said a few words for our oven inauguration.

“...With the help of our friends and neighbors we built this oven with our hands. The clay that binds the oven together we dug from under foot; we mixed it with sand and hay and water, and stomped it with our feet. The rocks that make up the base were gathered from all over our property. It took a long time to make this oven, but it was worth it, because we weren't just making it for ourselves, we were making this oven to share with all of you. In the days, months and years to come, this oven will be used to create countless meals, meals made by hand, like the oven itself. Once the oven is fired it stays warm for many hours, and we hope to establish a regular baking schedule, so as a community we can share this warmth with each other. Let this oven serve as a symbol of the good things we can create when we work together.”

The afternoon culminated in a DIY Pizza Party, where folks made their own pizzas and had them fired in the oven by the unflappable Susan Larner. 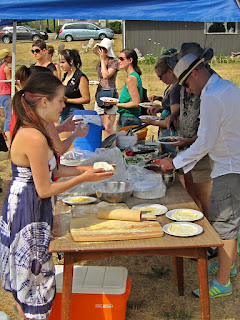 People lingered long after the show was over, not just savouring the pizza, but reluctant to let go of such a sweet afternoon together.

A big huge thanks to the many artists, foodies, friends and neighbours who helped make this such a wonderful afternoon. We couldn't have done it without you.