The May long weekend marks the official start of a new season of Small Pond Arts and our festive adventures, and each year we kick it off with a party which we're now calling our "Silobration." Everyone is invited to partake in potluck delights, games, and of course, the main event: the raising of the new silo banner. 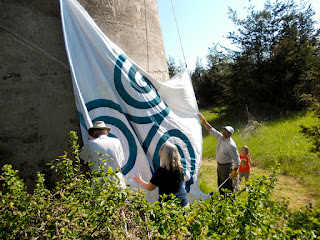 As usual, two people work inside the silo, hoisting the banner by pulling the ropes, while a crew outside makes sure nothing gets tangled and that the banner reaches the desired height. I've always been on the inside, so I'm one of the last people at the party that gets to see the new banner, but I enjoy climbing out of the silo and running around the foliage to get my first look. 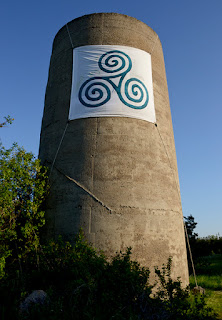 
Krista's banner idea this year was an ancient design called a triskelion, first used in Malta (4400-3600 BC) which has many different (and some contradictory) meanings and symbolism, and has been adopted by many cultures all over the world, and designs vary greatly. For our purpose as a banner design, the meaning Krista chose to focus on is the three arms symbolizing the past, present, and future (which is how the Ingush people of Russia use it).

Of course, I have been familiar with two particular uses of triskelions for most of my life: 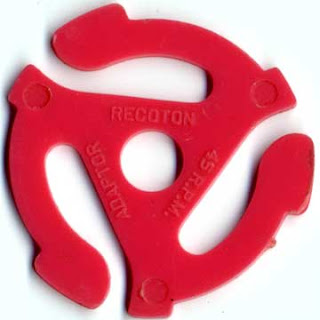 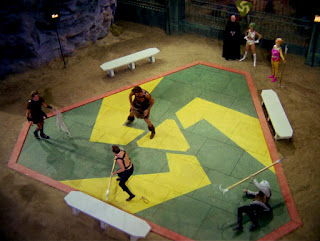 ...and a not-so-great episode of Star Trek.

I'll wager fifteen quatloos that nobody is surprised by this admission.


But speaking of television, and invoking the past, I took the design for ABC's Sunday Night Movie and adapted it as a fun graphic for our Season 7 launch. 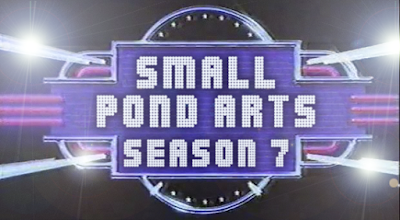 And speaking of adapting 1970s-era graphics, I recently created a series of 77 "trading cards" based on the hugely successful Topps series of Star Wars cards. These only exist digitally on our blog (and have no "backs"), but feel free to print them out...if you dare. They're a fun way to look back on our previous six seasons and many amazing people are featured.


After a pretty cool start to the spring, we were happy to have perfect weather for this year's Silobration: not hot, but not chilly; slightly breezy, but not windy; not cloudy; and barely buggy. Just looking at this picture makes me feel warm and serene. 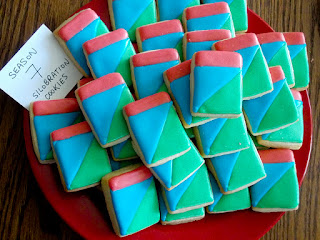 Among the tasty potluck offerings were these delicious cookies made by Karlyn Madrid of Karlyn's Cookies. There were also two varieties of boozy root beer, which required much taste-testing to reveal which was superior. 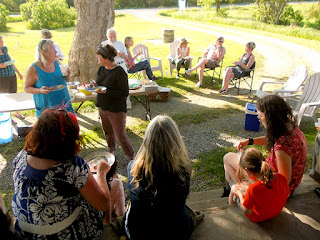 People came from far and wide to enjoy the festivities, share some great food, and play some kubb (not pictured). It was, as always, a banner day. 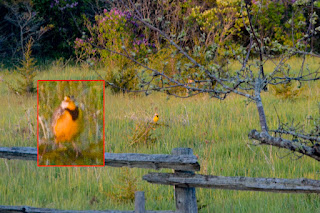 Meanwhile, we've noticed a new species of bird hanging around our back field. It's possible we've had Eastern Meadowlarks for a while, because their song is familiar (but with so many mimics, who can be sure?), but this is the first year we've actually spotted one. They're about the size of a robin and so deeply, beautifully yellow on their front side. We've spotted this one in the back for a few weeks, now, likely nesting in the grass nearby, but getting a good photo is tricky. 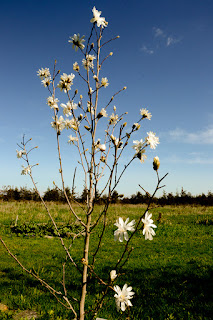 The magnolia tree that Elizabeth and Tom planted as part of their wedding ceremony held at Small Pond last September came into full bloom just a few weeks before our Silobration... 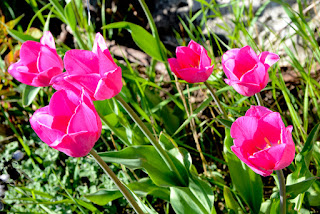 ...as did these perennial tulips at the side of our house... 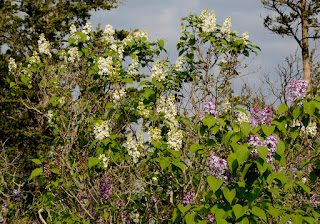 ...but our lilacs were right on schedule, ensuring the weekend was not only pretty, but permeating the landscape with one of my favourite aromas. If only they lasted all summer... 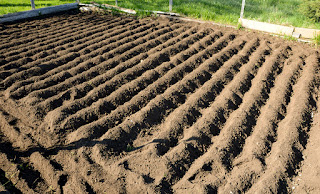 
Having looked at the past via my weird 1970s tributes and the recently-bloomed flowers, the present via a new silo banner and the enjoyment of friends and wildlife hanging around Small Pond, we now look to the future and the bounty in store that will come from our garden for us to share and enjoy in the coming months... 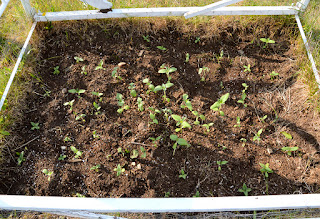 
...and then there are the recently-planted sunflowers which will grow tall, strong, and golden, attracting a nice variety of birds and bugs...and my camera lens.