Back to the Shadowlands

There have been a few lucky moments in my life as an artist when I've been in the right situation at the right time, surrounded by just the right people to support me, allowing me to work at my full potential.  The last couple of weeks have been such a time, as I worked with an incredibly talented and devoted group of collaborators, bringing two shadow puppetry plays to life:  The History of Shadows and Doubt Seed, which we presented at Small Pond Arts.


We first came up with the idea of The History of Shadows last summer while were developing Doubt Seed (which I wrote about extensively here).  Wouldn’t it be cool to tell the history of shadow puppets – with shadow puppets?  And to take things one step further – what about the history of shadows themselves?  The more I learned about shadow puppetry the more fascinated I became with its long and rich history.  Why do we as theatre-makers choose to work in this obscure, ancient form?  What is it that attracts us to telling stories with a palette of darkness and light?

shad·ow·lands [shad-oh-landz] noun: A rare mental condition in which one is compelled to make shadow puppets for many consecutive hours, losing all sense of space and time. Often includes paralysis of the fingertips, bloodshot eyes, and prolonged delirium.

I started writing the script while Milé and I were in Arizona last winter.  I’ve been writing plays for more than ten years and I am still astonished how some scripts can come so easily, while others can be so difficult.  It took me six months to figure out what was going on in The History of Shadows.  I immersed myself in research, turning up many fascinating historical facts and anecdotes to include, but I struggled to find the emotional content.  Why did this story matter, and how would audiences be able to connect with it on a personal level?  The answer clearly lay with the narrator, Professor von Luminous van Murk.   I met with my collaborators numerous times over the months to try and unlock this puzzle.  Finally, and not a moment too soon, it came to me.  Despite all appearances of being a history lesson, it was ultimately a love story, and a tragedy, and these two elements would colour every aspect of the Professor’s lecture.  I figured it out just in the nick of time, turning out a final draft from which the designers could design and our narrator could learn his lines.

The History of Shadows takes us on a whirlwind journey around the globe and through time, from the Incas of Machu Picchu to philosopher Plato, the shadow puppet masters of Indonesia, the hated Marquis Etienne de Silhouette, the trendy 18th Century shadow players of Paris’ Caveau du Chat Noir, and many others, demonstrating how the humble, ethereal shadow has shaped our world.

Our artist collective is always trying to push the boundaries of our work and try new things.  The design of the show by Craig Morrison and Guy Doucette was nothing short of brilliant.  It was full of complex, layered and encoded imagery, that perhaps is only fully appreciated with a second or third viewing.  It also explores meta-theatrical concepts, such as puppeteers controlling puppets who are puppeteering.

Being the writer and producer, it seemed like a natural progression for me to add ‘Director’ to my list of duties.  In the past our collective has worked without a director, opting for a very democratic, collaborative creative practice.  But all of us are interested in improving our craft, and the best way to do that is to have a critical eye on the proceedings.  Besides, I realized last year after crawling around on the ground for a week, that I was getting too old to be a shadow puppeteer.  My knees protested.  My back ached.  It was time to move out from behind the screen.

Trevor Jablonowski, dear friend and Small Pond regular, did a spectacular job of bringing the Professor to life in his role as narrator.  His performance was by turns riveting, hilarious, and heart-breaking.  When not performing, Trevor also delivers coffee, barefoot. 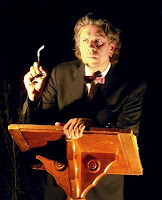 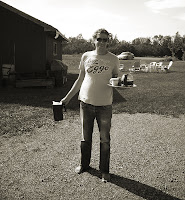 The History of Shadows is not exactly a light-hearted puppet show, and I think the audience was relieved when they found themselves watching a more fable-like show in the second half with Doubt Seed.  There are some easy laughs in that play, and Guy Doucette’s energetic performance leaves the night on a high note.

We had three magical performances; the first two were outside, where the action was  underscored by a chorus of a thousand crickets, and we used environmental projections to great effect.  The last night of the show we moved indoors to the art barn as the weather was looking a little dicey. 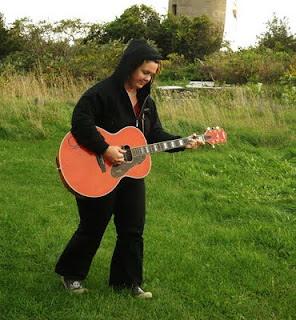 Our performances were accompanied by brilliant musical guest Arlene Bishop, who also appeared recently at Cornography.  I love it when we have girls with guitars roving about the farm like wandering minstrels.

Six months of planning, two weeks of intensive building and rehearsing while all living together at Small Pond, three nights of performances... and in a blink, somehow it was all over.  We were so immersed in the experience of creating the show, were so swept away in the tide of creativity and camaraderie, that it was quite a shock to all of us to have to say an abrupt farewell.  With reluctance the hundreds of puppets were carefully packed away. 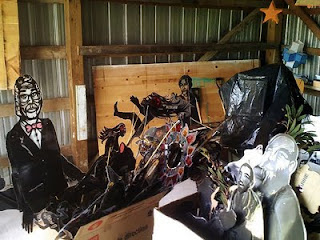 The puppeteers and I all clung to each other, unwilling to let the magic end.  Even now, days later, I miss them all so much.  The sound of the crickets is deafening in the absence of their laughter. In the words of Goethe, and as was quoted in The History of Shadows, “Where there is much light, the shadow is deep.”   My most profound thanks to my collaborators for shining such a bright light in my life.  I can’t wait to do it all over again.

Thanks to all our helpers - especially Elizabeth Brandeis and Milé Murtanovski - and to the Ontario Arts Council and Canada Council for the Arts for their financial support.
Posted by Krista Dalby at 1:20 PM